UPDATE 06/21/2011:  Final Cut Pro X officially released by Apple.  Check out all the details about FCPX including technical improvements and dynamic new features of the interface.

Apple has been primarily silent about the software since it’s public preview at the April 2011 Las Vegas SuperMeet, but several bloggers and industry insiders have since speculated and revealed additional details about FCPX.  As we gear up for a formal release (Apple said June 2011), let’s take a look at some of the online resources dishing out the scoop on the application. 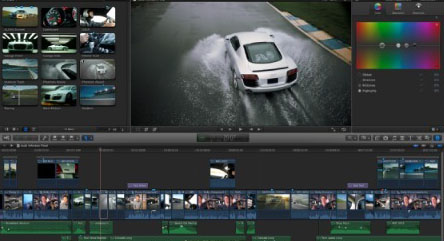 UPDATE: MacRumors is reporting that a FCP X formal release will come the week of June 19, 2011.  Their intel posits that the Final Cut Pro X release will correspond with the release of Thunderbolt related peripherals as well.

Blogger and video educator Zach King has a breakdown of the new features of FCPX, as demonstrated at the NAB / SuperMeet preview.  Be sure to check out Zach’s Final Cut King site as well, for tons of great Final Cut Pro tricks and tutorials.

Apple Insider has re-posted alleged photos of FCP X that appeared on Twitter recently.  The screenshots of Final Cut Pro X reveal color correction controls (some of the same controls we saw at the April preview).  If you want insight into the look of the new interface check them out.

Although there has been no word from Apple about the future of the ProApps line, many video professionals have speculated that they will be cut up and sold a la carte in the Mac App Store.  Although that is unconfirmed, these screenshots over at Cult of Mac can help to assure us that the ProApps line (specifically Motion) is also in the process of receiving a significant update.

4.  CNET Does a Post-NAB Rundown of FCPX

If you’re looking for a rundown of all the new features that will be included in FCP X check out this great blog post over at CNET.  They’ve got answers for many of the most common questions about Final Cut Pro X.  Very thorough!

One of the biggest confirmed upgrades to Final Cut Pro X is in the management of metadata.  Apple has placed great emphasis in project and clip organization and the ability to include and automate metadata.  Outspoken video professional Philip Hodgetts takes an in-depth look at the new metadata features of FCPX and how it will change the way we edit.

6.  Full Video of the SuperMeet at TUAW

Maybe you’ve got some time on your hands and want to view the SuperMeet preview in it’s entirety!  The Unofficial Apple Weblog (TUAW) has a complete video of the event.  See FCP X in action!

FilmmakingWebinars.com is a great resource for education on all things production and post.  They will be hosting an upcoming webinar geared toward a complete tour of Final Cut Pro X.  It will be free to watch live on June 30, 2011 and available for purchase to watch at a later time.  Filmmaking Webinars always produces informative content so don’t miss this one!

8.  Business Insider Has a Roundup of the Top Ten Features of FCP X

Business Insider has a roundup of their 10 favorite features of Final Cut Pro X. Background rendering, auditioning and a flexible timeline are some of the highlights on the FCP X list.

Not everyone is a fan of what they’ve seen of FCP X so far.  Video editor Matt Toder has an interesting opinion article over at Gizmodo that outlines why he’s less than impressed with the features (and lack of features) shown at the April preview.

Over at MacCreate, Aperture expert David Schloss contends that the look and features of Final Cut Pro X may be integrated into future versions of Apple’s photo editing software as well.  Schloss notes that some of the color correction and metadata functions of FCP X would be beneficial in futrure versions of Aperture.