For those looking to explore high-end color correction or looking for a replacement for Apple’s Color application (recently dissolved after the release of FCPX) take DaVinci Resolve for a test drive with this free version. The industry standard in color correction, DaVinci has undergone quite a transformation in recent years.  When BlackMagic purchased Da Vinci in 2009 they quickly integrated it into their line up of cost-effective professional video solutions.  In 2010 they introduced a software version of Resolve for $995, tens of thousands of dollars less than previous DaVinci systems.  Now, they’ve taken it one step further by releasing Resolve Lite for Mac – a terrific way to “try before you buy”. 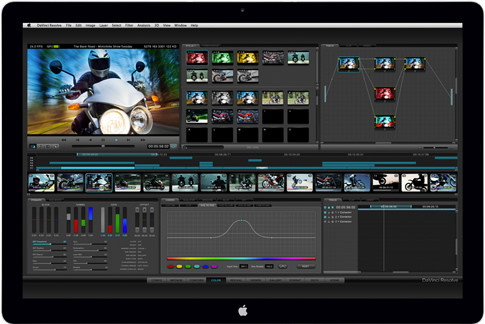 Although called the “Lite” version, it has many of the same features that make Resolve such a powerful grading program (including the same user interface).  The four biggest limitations of this free version are:

LITE:  Projects limited to SD and HD resolutions only.
RESOLVE:  Support for 2k, and 4K footage.

The Lite version supports the Tangent Wave (approx $1,500) and other 3rd party control surfaces, but not the powerful propreitary DaVinci Resolve control surface (retails for $29,995). See the official Blackmagic site for a full list of the differences in Resolve versions (Linux / Control Surface / Mac Full / Lite).

Try Resolve risk free by downloading the free Lite version over at the Blackmagic site!

What applications do YOU use for color correction?  Got DaVinci tips?
Let us know in the comments!