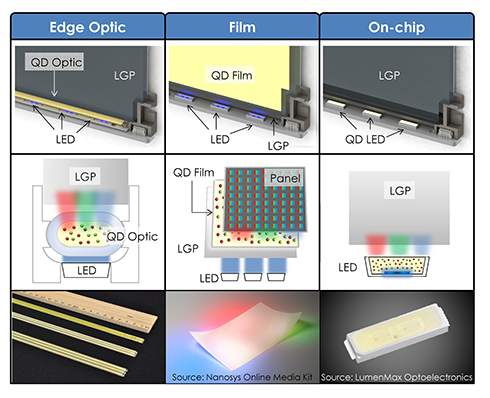 The science behind an emerging technology known as quantum dots will soon allow for improved color performance and an adherence to standards that have largely been ignored on the manufacturer’s end. The technology is already powering award-winning 55” Sony displays as well as the 8” display of the Amazon Kindle HDX.

You may have heard of quantum computing, in which bits not only exist as ones and zeros, but as either at any time. Quantum dots are similar in concept, harnessing a different property of quantum mechanics that allows engineers to change the color of the material by changing its size. This relates to quantum weirdness, a real term, believe it or not, which states that substances can be determined not just based on what the materials are made of but by the size of these materials.

QD-Vision is a company dedicated to developing and advancing the quantum dot technology and has been shipping optical products worldwide since the beginning of 2013. QD has the world’s largest manufacturing facility of the technology, and markets a type of tube which is just one component of an LCD display. A manufacturer like Sony puts the tubes into their LCDs to take advantage of the dots when it designs their TVs. 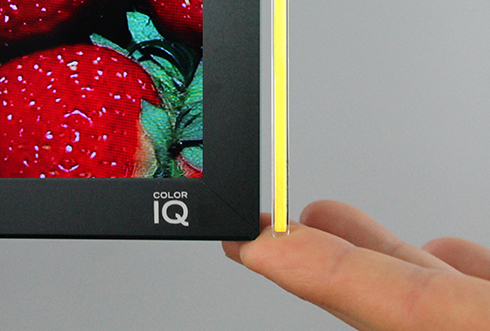 QD-Vision’s Color IQ optic alongside a TV, to show size

The advantages of the dots themselves are manifold. First, they deliver OLED color at the cost of LCDs with an improved color performance of 50%. The technology is cost-effective as well as efficiently scalable, so it can be used in small and large displays alike, and will be able to support the upcoming Ultra-HD standard. Quantum dot optics also offer the only full NTSC color gamut solution in a market riddled with unmet broadcast standards. If that’s a bit over your head, consider this: Sony’s Triluminos series that houses the technology won the Best in Show Award from Tech Radar as well as a Blue Ribbon for Best Home Theater Product during CES 2013.

Seth Coe-Sullivan, Co-Founder and CTO of the company, helped to distill the complicated, physics-laden parts of the technology. “Color and wavelength are different ways of describing the same thing. A red material makes a longer wavelength than green which has a slightly shorter wavelength. Just like light has a wavelength, electrons have a wavelength, and we’re making the particle so small that it’s actually changing the probability distribution of the wavelength of the electrons in the quantum cell.” The probability is what makes this stuff quantum, like in quantum computing above. The dots can then be “tuned” to different colors, resulting in an image which is not only superior to its predecessors but also more accurate from a broadcast perspective.

Coe-Sullivan is passionate about the technology, but he is most excited when talking about the end product, the quality of the image itself. He says, “What’s really exciting to someone like me is that you take all the physics and quantum mechanics and make something that’s visible to the human eye. Someone in [a colorist’s] space can really see the difference in saturation. The eye is pretty sensitive to it.” Science for its own sake is not what we’re after. The quantum mechanics involved in these displays will tremendously impact the quality of the actual image, which is what it’s all about. This technology isn’t in place to baffle the average consumer; it will actually be essential to achieving a full color gamut as standards like UHD become commonplace. The standards themselves are demanding, and increasing, say, dynamic range has large implications for other aspects of the image, including temporal resolution and framerate, a topic I discussed in more length here.

Professional Use of Quantum Dot Tech

As quantum dots bring about a relatively inexpensive feature to LCD displays, the challenge moving forward for industry professionals becomes about integrating the wider gamut display into production and post-production pipelines. With wider standardizations, we get closer to achieving moving pictures the way they were intended to be shown through filming, color, to final output. Today, very few displays conform to any of the standards. We’re not just talking TVs (although watching something I worked on at a bar with the “Sports” setting always makes me cringe), but phones and tablet computers as well.

Most content is delivered by post professionals to the REC.709 standard, but that doesn’t mean the devices displaying this content have conformed to REC.709 at all. In the manufacturing process, LCD panels are sourced from a number of different parties due to volume but also to keep the bases covered in case there are issues with one provider. Coe-Sullivan adds that it’s difficult for a setmaker to adhere to these standards since not every component is standardized. However, “by having the flexibility at the quantum level, we can help a maker deliver a set that adheres perfectly to one of these standards, whether it’s REC.709, Adobe RGB or digital cinema, without affecting the rest of the supply chain. So they don’t need new LEDs, color filters or polarizers.” In LCD technology, it’s optimal to hit the exact wavelengths of the tristimulus system (red, green and blue) to prevent desaturation. Quantum dots are extremely effective at hitting these values. “We can do all of the tuning so that whatever all those components are, they hit the standard accurately. That’s something that’s very hard to do without quantum dots.”

The Future of Quantum Dot Technology

The future of QD is to delve deeper into the display market. Since the dots can be so finely tuned, QD could get into displays of all sizes, from television screens to tablets to mobile phones. It’s great to hear that a new technology is helping to bring more accurate colors to audiences, and combining this with the ACES color space in post will move this significantly into a reality to ensure that our professional work will be shown as intended on a calibrated piece of equipment.

Have you heard anything about quantum dots? What do you think about the quantum dot technology? Let us know in the comments!