Apple makes major update to MacBook Pros, but a minor upgrade to new Mac Pros may have many creative professionals feeling abandoned.

Users have been speculating for months that Apple may be abandoning the professional market by possibly killing off their high-end Mac Pro computer line.  Without a major announcement at the WWDC, Apple has all but confirmed that Mac Pros towers have reached the end of their product life.

Although they were not announced at WWDC, new Mac Pros have been added to the Apple Store.  It’s been nearly 2 years since the latest Mac Pro update and these latest versions are simply incremental updates. The new Mac Pros get a minor speed upgrade.  That’s appears to be it – no Thunderbolt and no USB 3.0.

This very minor update may be the sign of an end-of-life product.  The Mac Pro has always been a workhorse for photo and video professionals, with it’s fast processing and fully customizable architecture…but it may soon be reaching the end of its product cycle.

It comes down to finances.  As Apple grows it’s consumer market, the professional side represents less and less of their overall revenue.  They long ago abandoned Shake (compositing app) for the same reasons.  It costs more to support a niche product than it may be worth to them.

Final Cut Pro X was created to appeal to a wider CONSUMER user base.  Should we be so surprised that the Mac Pro quickly followed suit?

iMacs and MacBook Pros will continue to get upgrades (see info below) and for some video and photo pros this may be satisfactory.  But serious users, with the need for more customization and expansion, will likely be moving soon toward PCs.  Video and photo creative professionals will abandon Apple apps in favor of Adobe and Avid products – further solidifying Apples move away from a pro user-base.  It was fun while it lasted, Apple.

The retina display technology currently present on the iPhone and iPad will now be available on the MacBook Pro, making it the world’s highest resolution notebook display.  This new MacBook Pro line features a thinner, lighter design (25% thinner than previous models). The product launch put a strong emphasis on the MacBook Pro as a creative tool.  Photo and video editing on these new models should be pretty incredible:

These new MacBookPros get 2.7GHz quad-core i7 processors and up to 16GB of RAM.  Comes standard with 768 GB of internal FLASH storage.  It appears that the 17″ MBP will no longer be made however – likely to be the lament of some pro users. 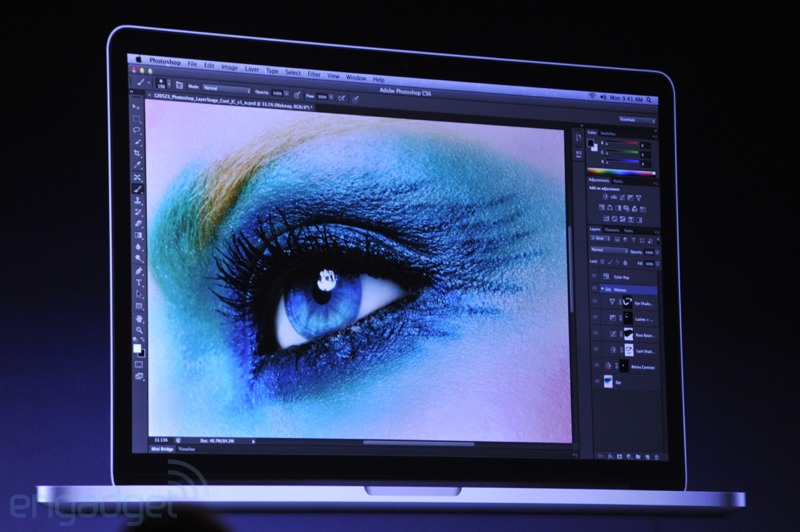 MacBook Air also gets an upgrade with USB 3.0, 512 GB of flash storage and faster graphics processing.