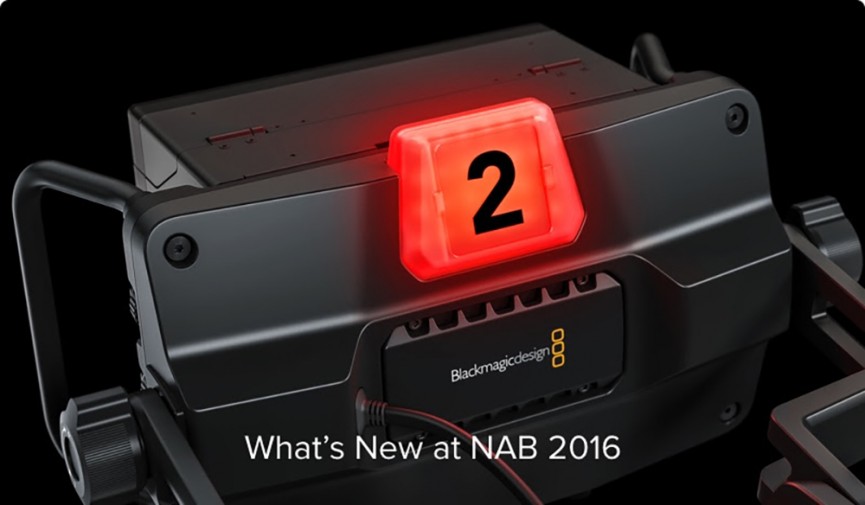 With NAB 2016 rolling along, Blackmagic Design reveals this year’s list of new products and updates.

At last year’s NAB, Blackmagic stole the show with their reveal of the URSA Mini. This year they’re back with some solid updates (mostly to the Mini) and major 4k improvements to old favorites. Highlights listed below:

This beast records high-quality H.265 onto 25 separate SD cards. Designed for the television production industry, the Duplicator 4k allows you to flip content instantly by recording in real time to all 25 cards. There’s even an option through a 12G-SDI input to daisy chain duplicators so you can keep adding extra capacity while still recording at the same time.

This new model Video Assist 4k allows for a 7-inch monitor and broadcast quality recorder to be added to any SDI or HDMI camera. The Assist 4k boasts additional aids such as peaking, focus zoom and a histogram, along with two analog audio inputs with phantom power that allow you to completely bypass camera audio.

The URSA Mini gets a much-needed boost with a total redesign of its OS. For starters, you can now touch any setting on the LCD and adjust directly without going into the menus. Control of the iris has been tweaked to be more intuitive along with improvements to audio leveling. Probably the coolest update will be the new 3D lookup tables for the internal LCD and SDI output. This means you’ll be able to load custom color looks stored in the camera’s internal flash memory.

Resolve also gets a good kick up with a new variable speed curve integrated with retime controls and the addition of metadata in the edit page. With the metadata, there are a lot more compositing modes as well as new effects including dissolves, wipes and other transitions. Another big addition is a new audio waveform overlay in the source viewer for cutting against an audio track (which you couldn’t see before).

For a full list of new products and updates, you can view the press releases at Blackmagic’s website — or watch an in-depth feature on them here.

What do you think of Blackmagic’s products and updates from NAB 2016? Share your thoughts in the comments below.