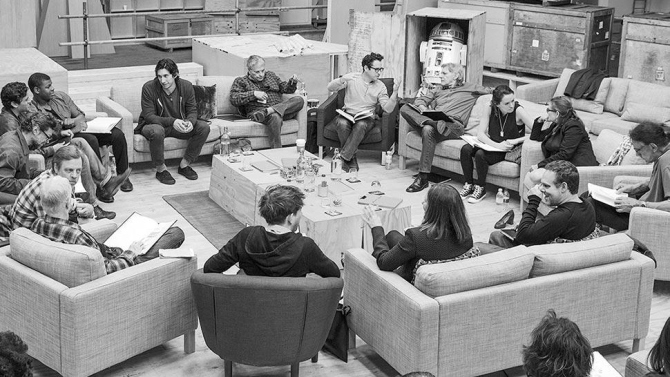 Need to Table Read a Script? There’s an App for That.

Screenwriters and directors love going through a script before filming. Now there’s a tool that can make it easier: AppCoustic’s Table Read App.

No matter if you’re working on a feature film or an industrial video, you’re going to need a script. Before going into any type of production, you always want to get your actors together to go over the script. You’ve got to have everyone on the same page.

This rehearsal is called a table read and (as a director) I require this before any shoot because it allows me to work through the characters with the actors. But sometimes I like to go through the script with my fellow scriptwriter before we even proceed with the table read. Usually this means we sit in my office and go through the script line after line. But now there is a app on the horizon that will allow us to do that with multiple voice actors.

Exactly What This Is

AppCoustic has created a new app called tableread that does exactly as the name suggests. As a screenwriter or director you can use tableread to review and voice act your script before you meet with your cast. This is really helpful because it allows you to sit back and review rather than try to perform the script, which I’ve done several times before going into a table read.

Currently the tableread app is only available on iOS devices, but an Android version is coming soon.

How to Get Started

When I got my hands on the tableread app, I was surprised how easily I was able to add a script and get going. I opened an email that contained a finished script and within seconds I was able to get it uploaded to the app and start the process of getting my first project going.

While the free version is impressive, the Pro version is pretty amazing. With the Pro version, I was able to upload my script and then set specific voices for each of the characters. On top of this, I was able to add a score underneath, which was incredibly interesting. The only thing I wish I could have done was upload some of the music that our composer had already done.

The cost for the Pro version is $2.99 a month, but you do get a seven day free trial to run through the app. Again, I was quite impressed with the app and what it can do. While the voices are really customizable, they’re still automated voices and don’t always translate your script super clearly, but this app is in its infancy. As it moves forward, I’m sure that will become less of an issue for some.

Example of a Table Read

Table reads are an important part of the creative and filmmaking process. As mentioned before, screenwriters and directors love them, as they allow you to go through the story with the actors who will be portraying the characters in the film. But now the question is: have you ever seen or been apart of a table read? If not, you’re in luck. Here’s one of our favorite table reads. It’s from this year’s Comic Con and it features the cast of Family Guy acting out portion of an episode.

As a filmmaker or videographer, do you use table reads before going into production? Do you think this new app can help you in that department? Does this new app interest you at all? Let us know in the comments below!