Manifesto text generator for Final Cut Pro improves on the abilities of its predecessors.

Since it’s initial release, Apple’s Final Cut Pro has continued to improve with each update — slicker interfaces, expanded tool sets and greater editing functionality. With that being said however, there has always been one major function neglected in the Final Cut Pro application…it’s rudimentary text editor. I’ve never understood why Apple could continue to make such great improvements to the application while completely ignoring one of it’s most necessary tools.

In 2001, Boris introduced it’s Calligraphy plug-in for integration into FCP version 3 (and included in later versions of FCP). This was a bit of an improvement over the built-in text generator — but still left quite a lot to be desired. It’s clunky, has a poorly designed interface and at times can be downright buggy. There had to be a better way.

Manifesto is not a completely re-imagined product. Rather, it takes the models set forth by the aforementioned Boris text generators and greatly improves on it. Let’s take an in-depth look at Manifesto, how to download/install it and how it can greatly improve how you handle text in Final Cut Pro.

Manifesto is a free application that is designed to be integrated into the Noise Industries plug-in management tool called FXFactory. For those not familiar, FXFactory is a visual FX suite that supports a large number of plug-ins for Final Cut Pro. One of the main benefits of FXFactory plug-ins is that they are built on the FXPlug plug-in architecture. This means these effects are rendered on your computer’s GPU (graphics processing unit) instead of on the system processor, amounting to faster rendering and generally powerful performance. FXFactory is a free download and comes bundled up with quite a few free plug-ins (additional plug-ins can also be purchased through Noise Industries and other third party vendors). Download FXFactory here.

As you may have guessed, in order to run Manifesto you will need a current copy of FXFactory running on your system….so make sure to that first. Once, FXFactory is installed, download Manifesto from the Noise Industries site and install it as well. Installation = easy.

Once you boot up FCP again you’ll see Manifesto in the Browser’s Effect tab under Video Generators > FxFactory Freebies > Manifesto (Roll/Crawl) and Manifesto (Static). Although you may use the Roll/Crawl generator for creating credits, I’d guess most of the time you’ll use the Static option (both have similar interfaces). Just like the Final Cut Pro’s text generator, you can either open it up the controls by double clicking the icon in the browser or by dragging in the timeline and then double clicking the clip. Both options will allow you access to all of Manifesto’s Editing options in the Viewer window.

Now onto the good stuff….

Manifesto has a leg up on it’s predecessors in a few key features.

• Presets can be created and saved. The plug-in comes packaged with a few presets (they’re pretty basic) but the real values lies in the fact that you can create and save your own. This feature would result in big time saving when working on a long project with multiple of instance of similarly styled text.

• The plug-in is clearly laid out and simple to use. For instance, the stroke and fill functions are easy to find, easy to use and are not buried within the interface (like with the Boris text generator).

• You can use external media to create masks — to either show or hide areas of the text. This can be used to create more complex, unique looking graphics.

• Built in motion blurring and flicker reduction included. FCP has never been great at processing text, especially when combined with motion. This feature helps to deliver text that is artifact-free and without unsightly interfacing.

• The text editor mimics what we’re used to seeing in a word processing application. Options to create numbered and bulleted lists and adjustable text baseline (the vertical height of specific characters) provide nice options for formatting.

• Percent of frame controls determine horizontal space. Want to have the text only take up 50% of the frame? Want it to bleed over the edges? You can easily control what percent of the frame the line width should be, taking the guesswork out of line breaks.

• And finally…I do think I saved the best for last…SPELL CHECK! The little tool that we probably often take for granted in most applications has been inconveniently left out of Final Cut Pro since Version 1. This function alone merits a download of Manifesto. 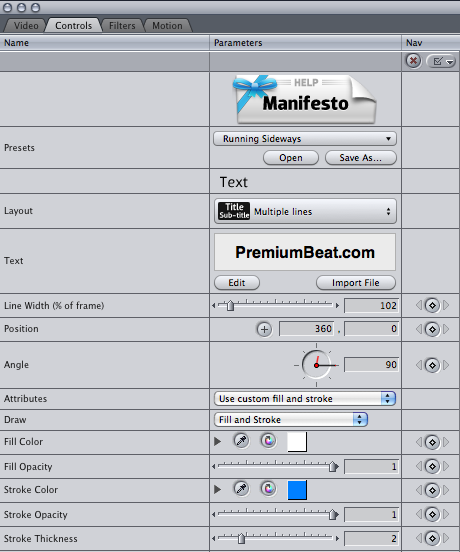 All those great things being said, I’ll reiterate what I said before: it’s an improved text generator….improved. There’s still much room for the development of a more sophisticated text editor and we can expect to see that in the future with the release of FCP X. All sources I’ve seen allude to the fact that FCP X will have the text editor built over the “Viewer” — so that you can see exactly where text is being placed in the frame and how it is affecting the shot. This is similar to the way that Apple’s Motion or iMovie currently handles text.

Download Manifesto from Noise Industries — Versions also available for After Effects and Motion.