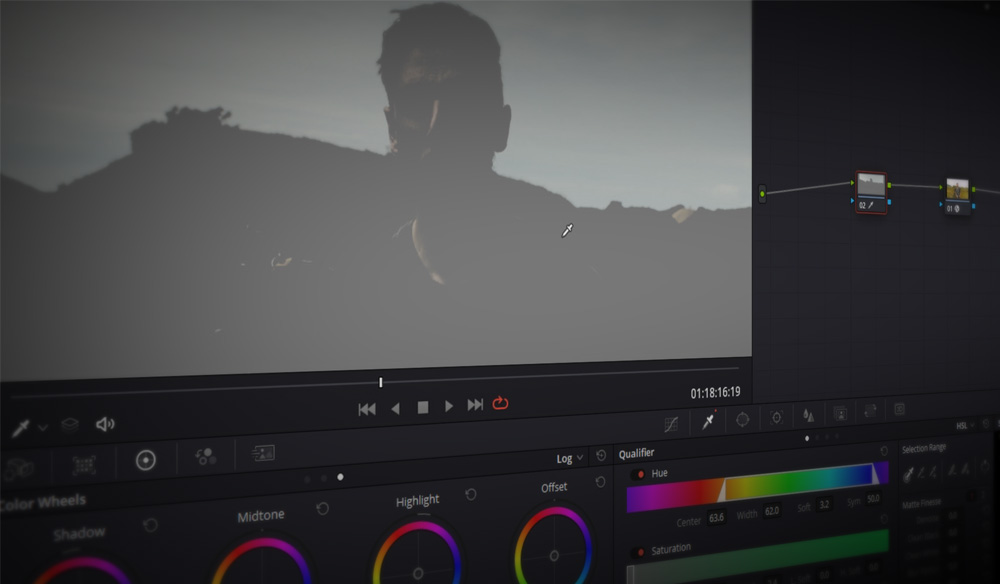 Video Tutorial: How to Revive Dry Landscapes in DaVinci Resolve

Shooting in the hot summer sun can result in footage that looks dried up and and washed out. Here’s how to revive these scenes in DaVinci Resolve.

Beyond staying properly hydrated and slathered up in sunscreen, shooting outside in the summer comes with some challenges. You’re faced with the desiccating effects of sustained heat on local greenery. Additionally, with the sun hanging higher in the sky longer, you’re dealing with bright, harsh light for extended times, which may lead to washed-out, white skies if you don’t have additional lighting tools.

Dried up grass and leaves and brutal blinding light don’t exactly scream luscious summer vibes — more like Mad Max. Thankfully, we can fix this in DaVinci Resolve, and I had to do just that for a recent Shutterstock Tutorials video.

Not in a spot where you can watch the clip? No worries — the transcript and screenshots below cover the steps and techniques discussed in the video tutorial.

This is the original shot: 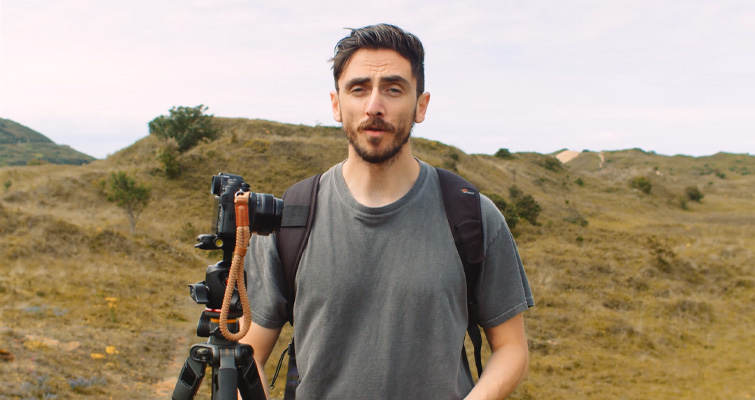 And here is the corrective grade: 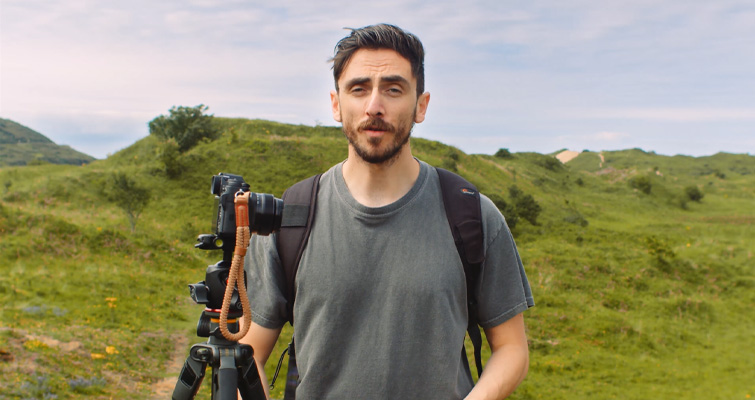 While the information is going to be primarily directed toward landscape shots due to the methods employed, you could take this information (in theory) and apply it in several circumstances. So, be sure to continue reading, even if you don’t have dried-up landscapes to bring back to life.

There are two ways in which we can do this. The somewhat preferred is to use a parallel node structure, like this: 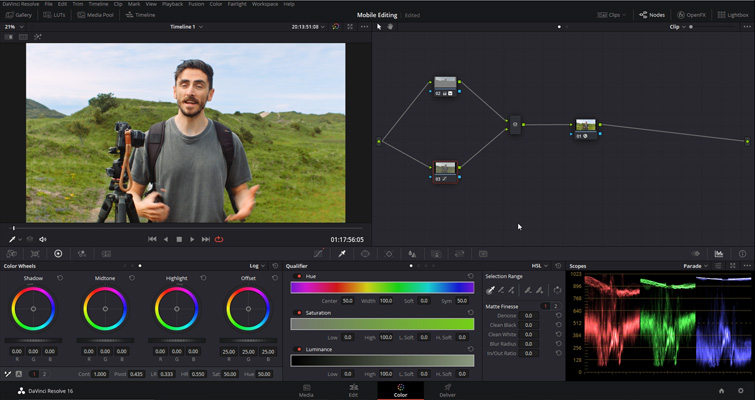 The parallel node structure is the preferred method.

However, to keep things simple for new users, we’ll work with the nodes serially so that we can see the process take place in a linear fashion. I’ve already placed our conversion/correction node. This is where you would put your correction LUT to add a gamma curve back into LOG footage. Although, in this example, I’m using FilmConvert. To a degree, it’s doing the same thing as a correction LUT. 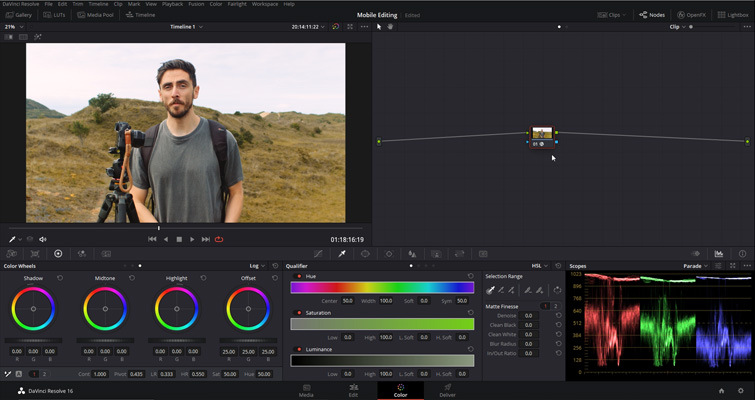 Press Shift+S to add a node.

First, we need to fix the sky. Nodes work linearly, so any changes I make after this correction node will not consider the original image data. If I were to add a serial node, then reduce the highlights, the original information is gone.

Therefore, I’m going to add a node to appear before this correction node by pressing Shift+S. Now any alterations we make will take place before the second node’s adjustments. 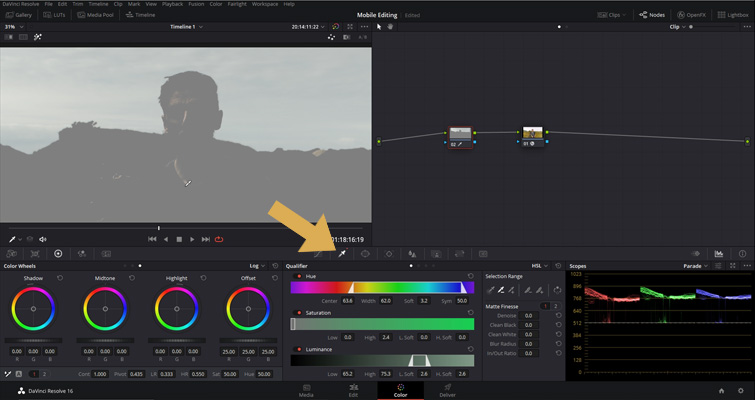 When you have a bright sky, it’s easy to qualify and fix, especially if there are no other white elements within the composition. Therefore, we’re going to select the Qualifier tool and pick a bright region within the sky. We should get a successful qualification off the bat.

When we turn on the highlight tool to see the adjustment, it has keyed a part of my neck. So, using the Qualifier tool with a minus symbol next to it in the Selection Range panel, we can correct this selection to just focus on the sky. It doesn’t have to be 100 percent perfect because we can fix these anomalies in a moment.

We’re going to take the Offset wheel, making sure we’re in LOG adjustments, and decrease it to make an overall adjustment to the entire tonal region of the sky, bringing it down until we can see the sky and clouds.

You could add a very slight touch of blue to the sky, depending on how colorless your sky looks. However, you want to make sure it’s only an incremental touch so you don’t add blue to the white clouds. Sometimes, you might be better served by bumping up the saturation instead of adding blue. 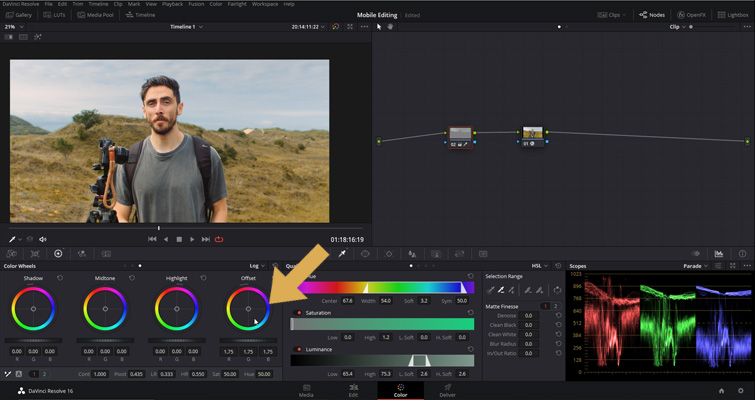 Make adjustments to the entire tonal region of the sky with the Offset wheel.

Now, we don’t want to nullify that sunny summer’s day element. So, we’re going to open our custom curves, create a point where the midtones are displayed (so they don’t get pushed up), then create a curve where the highlights are and slightly push that up.

This will make sure our sky still looks relatively bright, but natural and also viewable. If you’ve started to clip your highlights, make a highlight wheel adjustment to control them. But, by keeping the custom curve as is, it’ll keep the highlights bright. 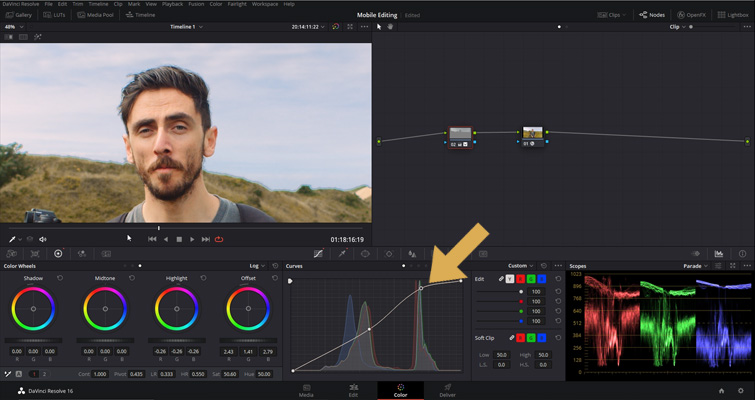 Now, we have two issues. The edges of this qualification don’t look great. So, go back into the Qualifier panel, and on the right, we have some fine-tuning elements. We’re going to bump the denoise up. And, if we just flick the node on and off, we can also see that it’s darkening the edges too much. So, we’re going to increase the clean black until it appears normal. 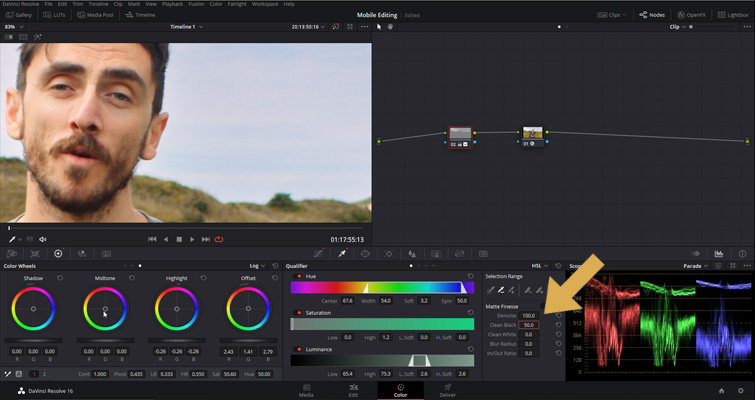 Return to the Qualifier panel to fine-tune your elements.

We do have a green/blue aberration along the edges found within the image, but this is just an artifact from the lens I was using. I use a Voigtlander 17.5mm, and when using a shallow depth of field, it can cause aberration. However, this effect has certainly amplified that, therefore we will fix this toward the end.

With the sky fixed, we’re now going to correct the grass color to look more summer-friendly, and we’re going to do this with the HSL curves. In the Curves panel, go to this dropdown menu, and select Hue vs. Hue. The Hue vs. Hue curve lets you change any hue to any other hue. Perfect for quick color adjustments. 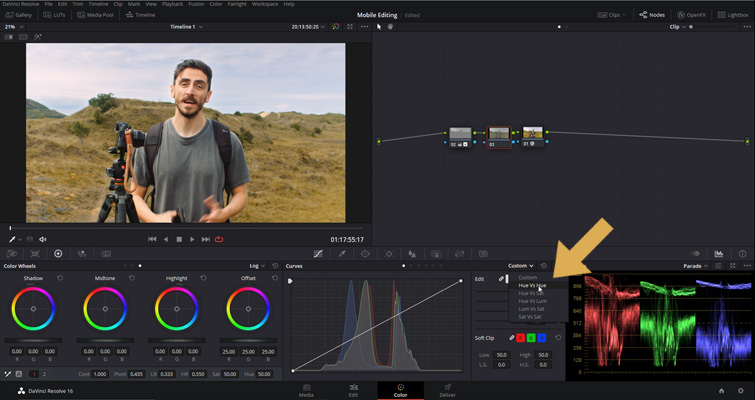 For quick color adjustments, use the Hue vs. Hue curve.

Then, using the qualification tool (not the actual panel, just the tool that automatically appears when using the HSL curves), select an area of the dry grass. In a meadow or a landscape like this, there are typically going to be brown/dirt-colored foliage, such as straw, weeds, and branches. Therefore, when we make our hue curve selection, we want to avoid these areas. 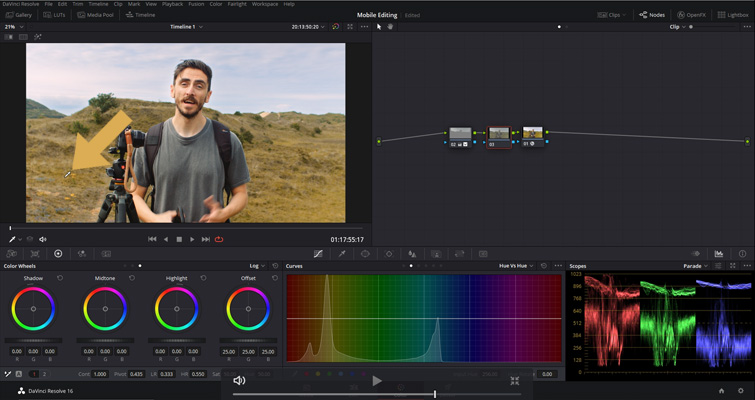 Select an area of the dry grass.

Now, all we’re going to do is bring the hue curve down to find the type of green we want. 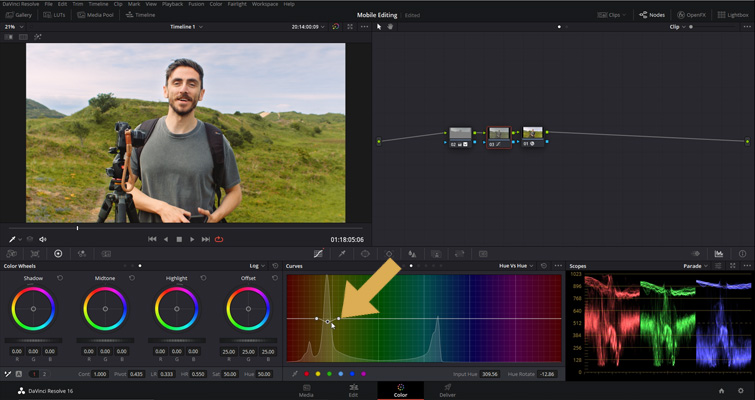 Move the hue curve to adjust the type of green you want for your background.

As with all forms of color correction, we want to make the smallest adjustment. And, there we have it — Welsh green grass. Just like how it looks during rainy season, rather than dried-up from several weeks of rainless, sunny days — not that I’m complaining.

As a bonus tip, if you’re shooting on a lens that produces aberration and it becomes especially noticeable after an edge adjustment, we’re going to go to said edge adjustment and create a parallel node. 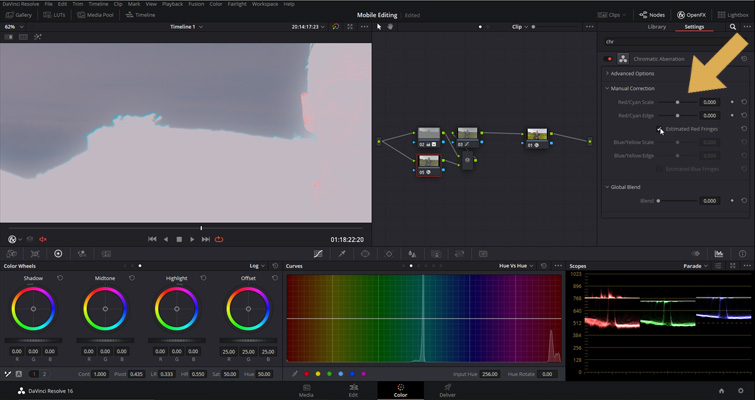 Here, you then need to add the chromatic aberration OFX plug-in to the new node and turn on the Estimated Red Edges to see the area that needs the fix. Then, I’m going to push that cyan edge into a different direction, which will nullify the artifact.

Find some shade and spend some time with this helpful DaVinci Resolve content: