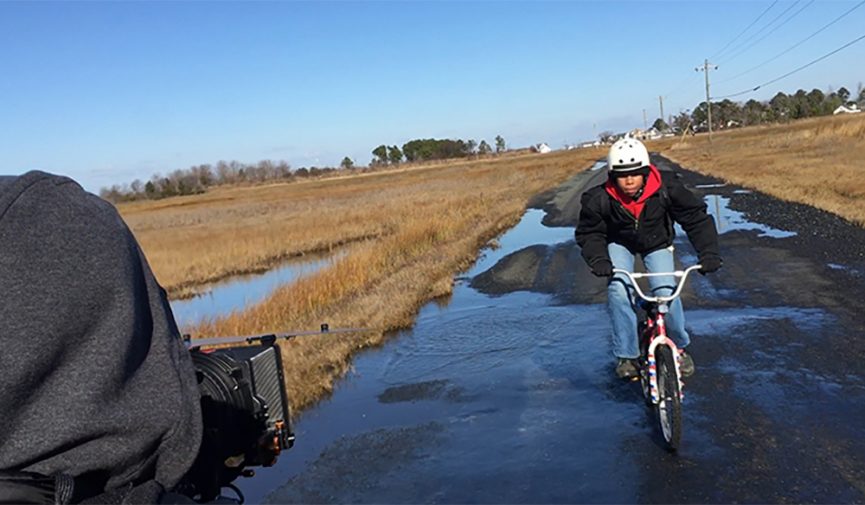 Tips from SXSW: Filming with Your Camera in Motion

2018 SXSW Film Festival’s Ben Strang shares these 7 tips from his original thriller series for shooting with a camera in motion.

All images via Beast.

It’s strange to think, but there was a time in cinema history when a simple left-to-right camera pan was considered an incredible innovation. Today, cinematographers have a full range of camera motion at their disposal, but not all movements are created equal.

We chatted with filmmaker Ben Strang about his SXSW Independent Episodic pilot BEAST, an adventure/thriller set against the Chesapeake Bay’s eerie marshland islands, about how he was able to work with his camera in motion while on location in challenging production environments. 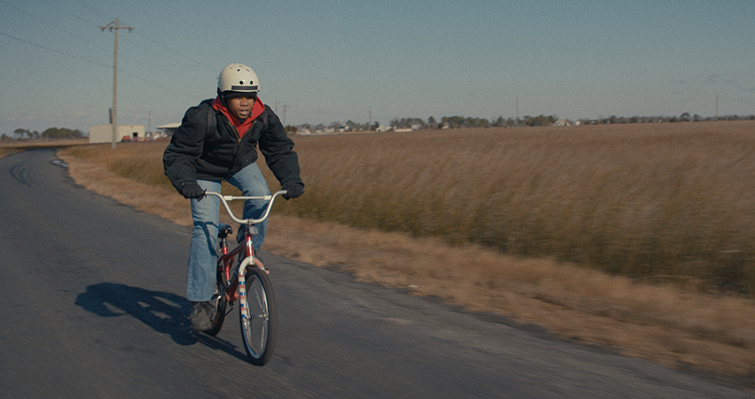 From the very beginning, we knew we were going to be putting the camera in some challenging locations, so it was top priority for me to storyboard the project way in advance and to have the editor on set with us so we could — as we ended up doing — throw the storyboards out when we were strapped for time and still come away with shots that communicated the right ideas/emotions.

When you start adding extra elements like movement and motion to your shots, a concrete outline of what you need to do to capture the right footage is absolutely key. Strang also talks about the nerve-racking schedule they had to keep while battling things like sunsets — knowing what you need to get by a certain time based on your storyboard is critical.

2. Use What’s Available for Motion 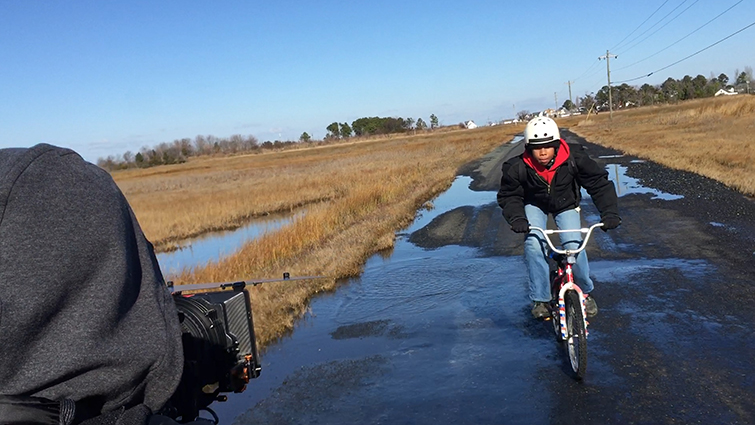 When you’re planning moving shots, you want to be thinking about WHY the camera’s moving in the first place so you can come up with a communicative way to move it and so you’re not just moving it for the sake of moving it. Is it tracking with a moving subject to add energy to the frame? Pushing-in to emphasize a character’s emotion in a moment?

For the majority of BEAST‘s production, the team was in a remote location on an island with very little access to the outside world. This meant that they had to improvise many traditional camera movement setups using whatever was available. Strang’s favorite shot (pictured above, video below), shows how they captured their subject riding a bike at a high speed toward the camera by strapping their Steadicam operator to the back of a pickup truck.

3. Make a Plan Before You Shoot on the Water

The biggest scene in the pilot, the end scene, was set on a boat in open water at sundown (and we filmed in 20-degree weather) so the safety, logistics, and planning was top priority. It became evident pretty quickly that all the shots on the boat were going to be done handheld. Tripod for boat-to-boat shots can work if you’re on calm water and have plenty of time, but we had planned the scene for magic hour with about 30-minutes to get what we needed between sunset and dark.

Strang stresses efficiency in all scene and sequence setups as the best way to move quickly between shots. This is especially true when filming against the elements and trying to work in the narrow periods of sunrise or sunset for cinematic magic-hour lighting. 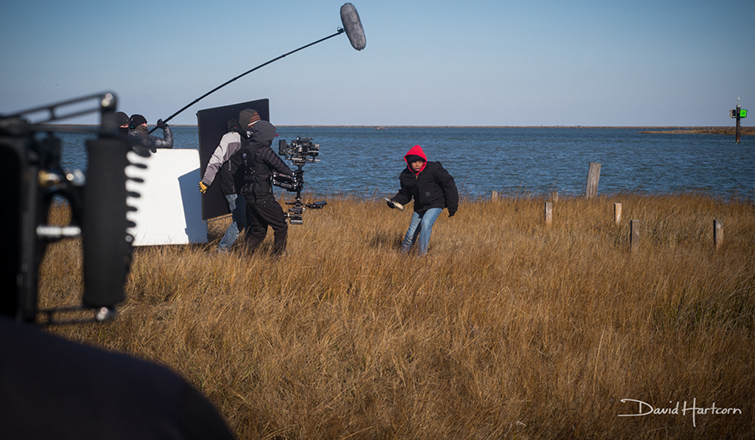 We had a number of scenes that were shot hundreds of yards from where a car could get to, so we were migrating the entire production on foot most of the time. Now, that’s not too challenging in and of itself, but when you want to do any kind of dolly movement that far off the trail and have a skeleton crew, you’re adding some significant setup time. For all the walk-and-talks through the woods, we kept [the camera] on Steadicam so we could get the camera where it needed to be quickly and minimize how much equipment we had to haul by hand into the woods.

To get another cool shot (video below), Strang actually had his Steadicam operator on the back of a golf cart (which were plentiful on the island). Similar to the pickup setup, the filmmakers used the golf cart to get a backward-looking shot of their subject riding out on a dock before doing a step-off to follow the character down the pier on foot.

To get a stable moving shot in front of the kid on his bike, we used speedrail to build a safety frame in the truck bed and then strapped the Steadicam op to the frame so the arm could be safely supporting the camera off the back of the truck. It took about 30 minutes to build the rig, and once the op was strapped into it he couldn’t move, so we did all the bike shots we needed in one go.

Working primarily with a Steadicam on land, Strang and his crew had their hands full keeping up with their character on his bike. While they always preferred to stay on foot, when forced to use their pickup truck and golf cart resources, they had to build out a DIY harness for both stability and safety. The rail bar contraption harnessed the Steadicam operator while the rest of the crew had room to pile in behind him.

6. Understand the Theory of Movement

On a theater screen, it takes your eye much longer to intake the image’s visual information than it takes your eye when you’re watching on a phone, so you literally can (if it serves your film) edit slower and move the camera slower when you’re shooting something meant for the theater or a big TV than you might if you know your project will be seen mainly on iPhones.

Since BEAST is premiering at a film festival but is ultimately intended for television, laptop, and smartphone viewing, Strang was in an odd position regarding moving shots. Different camera movements (and different editing choices) may look good on one format while feeling overwhelming on the other. Ultimately, Strang and his team decided to shoot for the theater screen and big TVs.

7. Only Move the Camera When You Need to 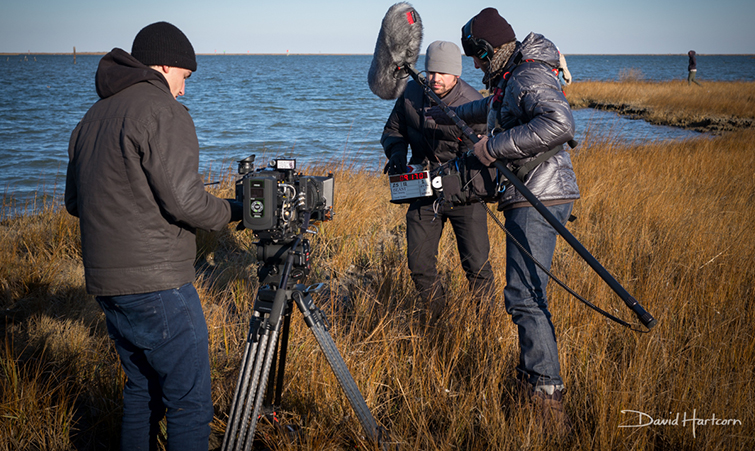 Well before we shot BEAST, I decided with my editor and DP that we wanted the show to have a stillness about it that captured the atmosphere of the island and let camera movement reflect the energy of the kid disrupting this quiet world. So in the drafts of storyboards that I did before production, we figured out when the camera absolutely needed to move as a point of emphasis and when the camera absolutely shouldn’t move.

Strang asserts that “both movement and stillness can have a loud effect.” Which I think is a profound statement because if you know why your camera is doing what it’s doing (and have storyboarded it out that way), you can let the motion and movement (or lack thereof) tell the story the best way possible. According to Strang, it’s also helpful once you start to feel comfortable with your static shots to scratch some more complicated and time-consuming movement “as long as the visual language is what you wanted all along.”

For more information on BEAST, check out the website and Instagram for updates on its post-festival run.

For more filmmaking tips and tricks, check out some of these resources.