To edit efficiently, it’s important to be able to quickly isolate and enlarge the area of the Timeline you’re working with, especially when editing a longer program. This post contains some effective tips for zooming and selecting exactly the part of the Timeline you want to use.

You probably are already well aware of the main way to zoom into the Timeline, which is to slide the scale bar to the right.

I encourage you to generally avoid using this technique if you can. It’s not very efficient to rely solely on your mouse for such a frequent activity as zooming in and out. Using the keyboard is a much better way to work.

Here are the default commands for Timeline zooming:

Ok, great — a keyboard shortcut with a modifier key. That’s two buttons to press every time you want to zoom in or out. Sure, it’s better than using the mouse, but why not make it one button?

I suggest you map the zooming commands to more intuitive and accessible keys, like the Up Arrow (Zoom In) and Down Arrow (Zoom Out) on the number keypad. To do this, you’ll need to perform a Menu to Button Reassignment in the Command Palette. FYI, Avid calls Zoom In “More Detail” and Zoom Out “Less Detail.” These are menu items that can be found within the Fast Menu of the Timeline. 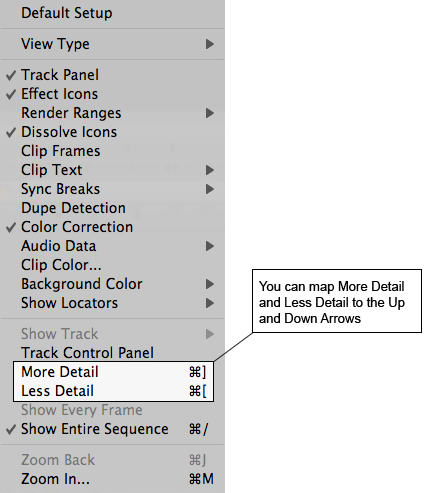 How to map menu items to your keyboard in Avid Media Composer:

There’s just a couple more zooming techniques that can benefit you when isolating a specific area of the Timeline. Sometimes, rather than exercising incremental zooms, you will want to quickly select an area to enlarge. Fortunately, you can do this quite quickly with just a couple of shortcuts.