Premiere Pro provides monitors to evaluate footage in a controlled way.  One of the most useful is the YC Waveform Monitor, which looks especially at the brightness range of shots. In this post, we’ll take a closer look at the YC waveform and explain how to use it to improve your footage. 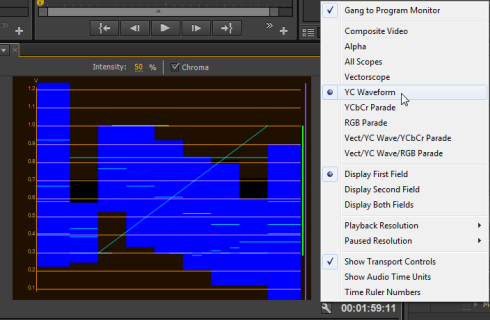 You can select any of the video scopes available in Premiere Pro either through the ‘Spanner’ icon (as shown above) or through the ‘Panel Menu’ (the little icon at the top right of every panel in Première Pro).

Let’s jump into using the YC waveform in Premiere….

I probably use this graph more than any other in Premiere Pro.  However, I think it’s worth saying at this point that you need to exercise a little caution when using the YC waveform monitor. This is simply because the monitor itself is usually not as wide as the footage in the program monitor. Why is this a little problematic?

As you look at the Premiere Pro YC waveform monitor from left to right, it represents the footage from left to right.  You can end up having to guess which bit in the monitor refers to which bit in your footage unless you have a very clear feature (as with the wave in the following images). It’s important to be aware that the horizontal scale represents the horizontal part of your image, but the vertical scale shows something else instead – the luminance (or brightness) of the image.  Let’s dig deeper into that…. 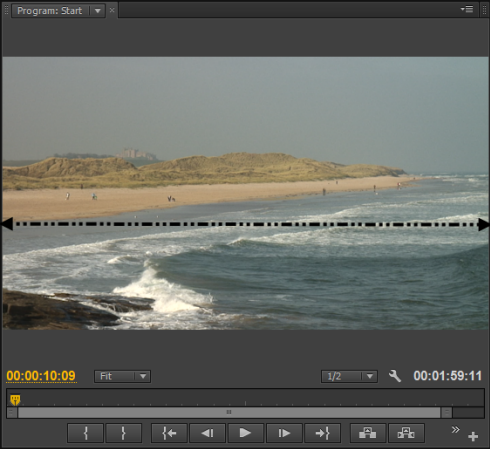 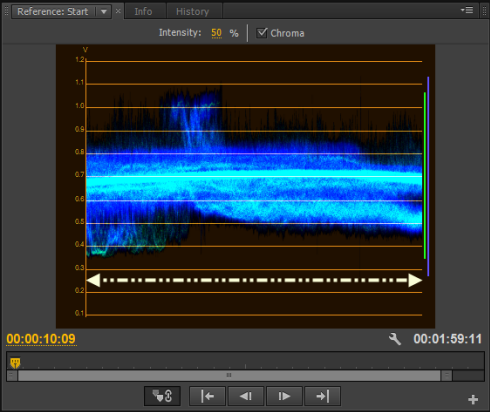 So, what are you looking at with the YC waveform monitor? Well, Y = Luminance and C = Chrominance.  If you look at the top of the monitor you will see a little check box next to the word Chroma which gives you the ability to turn off the Chroma element of the view so that you can just see the Y or Luminance portion of your shot.  To be honest with you, this is the way I usually use this monitor.

The ‘Intensity:’ setting gives you the ability to make the graph more or less intense should you struggle to see a fine point or if you find the graph too bright in your work area. It will not affect the footage in any way. 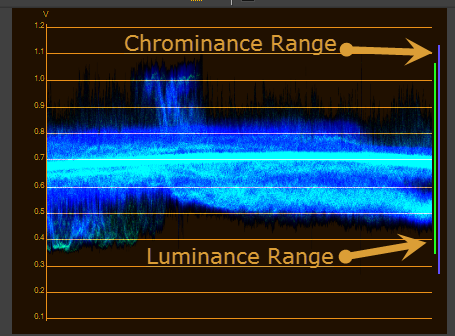 So how do I read a YC Waveform?

Using the YC Waveform in Premiere Pro is more simple than you might think. As said above, left to right on the footage is the same as left to right on the graph. However, the vertical scale (top to bottom) then looks at the brightness and darkness of each part of your shot from left to right. Such that if the shot has a bright part it will show up as an area towards the top of the YC waveform monitor (even if that bright part is at the bottom of your shot).

Have a look at the following example: 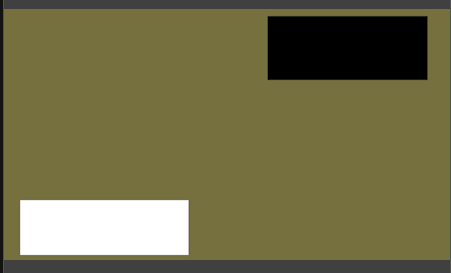 Now have a look at how the YC Waveform Monitor displays this. 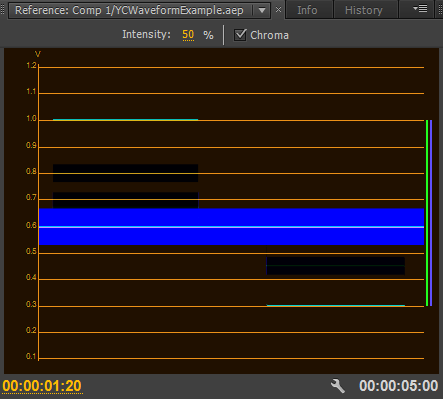 As you can see, the white area is in the correct space horizontally (left to right) but because it is a white area which is exactly the same color throughout.  It is represented in the YC graph as a straight line at the TOP of the graph because the vertical axis is only concerned with the brightness of the image.  Also the black area is correct horizontally but at the bottom, as darks are shown at the bottom of the YC waveform monitor.

So what about Chroma?

If you look at the image above you will see that the Chroma of the shot is pretty much a band in the middle. This is because of the colour of the background which is a yellowy/green colour but about 50% dark and 50% unsaturated … 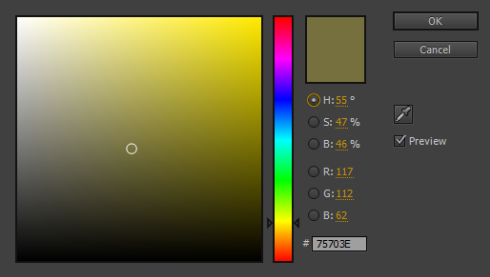 Now, let’s change that background color, adding some brightness.  This is shown by the little circle at the top of the colour screen but 50% towards pure white .. 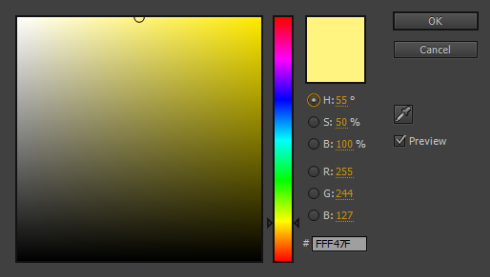 YC Waveform for the above background colour 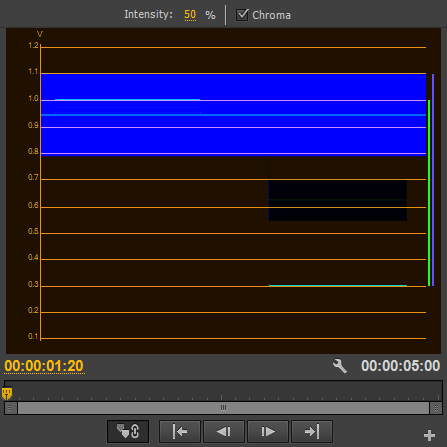 However, if I now change the colour picker for the background so that I have no added whites, darks or greys (mid-tones) as follows … 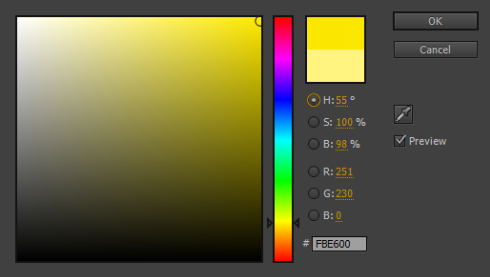 YC Waverform for the above background colour 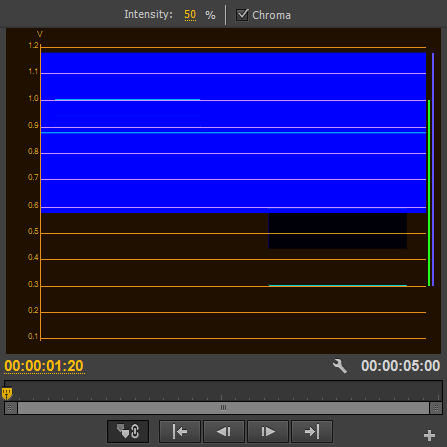 So in many ways, although not identical, you could say that the chrominance portion of the graph is giving you feedback as to the saturation or purity of the colours in your shot.

How do you use the YC waveform monitor?

In short, I usually have at look at the Chrominance values when I first select this monitor and as long as nothing looks way off, I tend to un-check the Chroma check-box and then use this graph to simply look at the luminance ranges in my shot.  In the event that anythin was way off, I would tend to then look at other graphs to get a better grip on what was going on.

Then, just looking at the luminance ranges, I can see if something is too bright or too dark as well as get visual graphical feedback as I apply something like the luma corrector or the fast color corrector to adjust the brightness and contrast of my shot. By having this graph open I can make sure that I don’t ‘over-cook’ my changes and can keep a good contrast to my shot. I can tell if the levels are pushed to much into the lights or darks by looking to see how much of the image has hit or is lying along the pure white or pure black limits of the graph. If I have items lying on these lines (unless they are items in the shot that are supposed to be fully bright or fully dark) I would then pull my values up or down to move them away from those limits and bring in a better contrast range for my shot.

Note: there are differences in the YC Waveform for NTSC and PAL sequences.

It is worth pointing out that there are differences between what will display in the YC waveform monitor when working with an NTSC versus a PAL sequence.

A special note for PAL editors: Unfortunately, Premiere Pro doesn’t seem to follow international standards for this measurement! In the usual PAL system you measure in mV (millivolts) where 100 IRE = 714mV and 0 IRE = 0mV (IRE 7.5 = 53mV) but for some reason Premiere uses Volts and has the range 0.3 to 1.  As long as you know about the differences this shouldn’t cause you many problems.

The second main difference when working with the YC Waveform in NTSC and PAL is seen at the top of the graph.  There is an additional check-box for the NTSC version to ‘Setup (7.5 IRE)’. This has to do with SD NTSC systems not coping with pure black and needing to have their systems adjusted so that the lowest black level is at 7.5 IRE and not 0 IRE. I believe that this is not usually a problem for newer HD NTSC systems, but I would still check with your customer before finalizing to determine if you are working to 7.5 IRE or 0 IRE.

One additional note: Some people have found that DVD and Blu-Ray production can looked ‘washed out’ if the 7.5 IRE button is left checked.  If you have this problem un-check this button and try encoding again.

I hope this little look at the YC Waveform Monitor hasn’t been too complicated!  The YC Waveform Monitor is one of those go-to tools in Premiere Pro that you will find yourself using all the time once you understand how it works and how helpful it can be!
e w
More articles from this Author