YouTube has now added 3D to 100,000s of videos on their site, but will anybody actually watch them?

In the last few years, there’s no question that 3D has gained some traction in the movie theaters, what with the rampant success of Avatar, Toy Story, Hugo and Harry Potter (among others).  Television has followed suit, with new cable channels offering 3D only content.  So with this tremendous push for 3D on all media fronts, it’s not entirely surprising that online video has joined the bandwagon.  But the big question remains, do YouTube users really desire it?


Any videos that have been previously uploaded to the site in 1080P are now available to be viewed in 3D.  You read that right…by clicking the 3D button in the video viewer, monoscopic (2D videos) are given a little stereoscopic (3D) “magic” by the power of YouTube’s processing.  The actual way it processes this video is a bit technical but here’s the gist (check out the YouTube blog for all the details):

We use a combination of video characteristics such as color, spatial layout and motion to estimate a depth map for each frame of a monoscopic video sequence.  The generated depth map and the original monoscopic frame create a stereo 3D left-right pair.

Viewers can choose from a variety of 3D viewing methods… 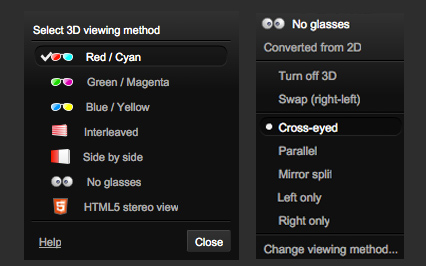 The majority of these viewing options require the viewer to wear 3D glasses, arguably one of the biggest deterrents for many users.  They’re uncomfortable, expensive and – surprise – they make everything in real-life look disorienting!  You do have the option to watch YouTube in 3D without glasses, but this approach requires you to cross your eyes.  You’re going to have to hold your eyes like that for the entire viewing experience to get the “3D effect”.  Doesn’t sound very pleasant.

Converting 2D to 3D is cool tech, certainly, but will users actually sit down at their computers and don the glasses to watch a 3D video of a little British boy biting his brother’s finger?  I’d guess not.

3D works well when it’s done right, with high production value and with content that actually merits a stereoscopic viewing experience.  Most amateur videos on YouTube certainly do not fit this description…but what about the higher quality content that is published on such sites as Vimeo?  Ok, now we might be getting somewhere.

In fact, there’s already a few Vimeo channels dedicated to shorts of this nature.  Vimeo doesn’t “3D-ize” the footage like YouTube does.  Rather, 3D videos on the site are a true stereoscopic video image (2 cameras are used to record the same action from slightly different angles and then combined in post).  Although it’s obviously much more time and labor intensive to shoot and edit stereoscopically, this provides the most true to life 3D image (hint: it’s the way James Cameron does it).  Check out a few 3D videos on Vimeo (glasses required):

The Stereo 3D Channel on Vimeo

The Stereoscopic 3D Channel on Vimeo

For many filmmakers, 3D may be the future.  It allows for visually stunning effects that otherwise wouldn’t be possible.

But do you really need to take your Rick Rolling to a whole new dimension?

Will you be taking advantage of YouTube’s new 3D option?
We want to hear from you in the comments.