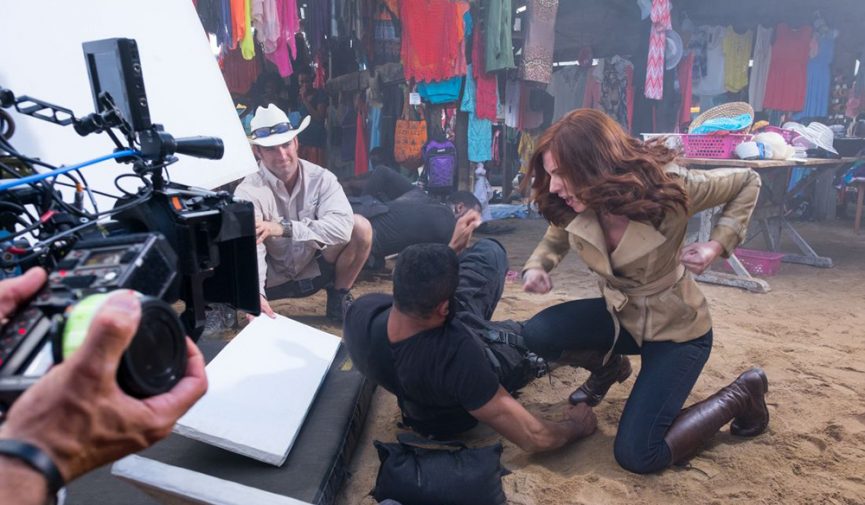 Follow these 6 pro tips to shoot realistic fight scenes in your next film.

If you’re anything like me, you grew up watching and re-watching some of your favorite action-adventure films on TV and VHS. I probably saw some action classics like Raiders of the Lost Ark or The Matrix hundreds of times. I knew the sequences by heart – including every kick, block, and punch in every fight scene.

A great fight scene can make a movie memorable. However, they are risky to shoot and require a great deal of technical skill to pull off. If you think you’ve got what it takes to step into the ring and throw down on a cinematic fight scene, check out these six tutorials to make a realistic fight scene in your next project.

Choreograph and Practice (and Repeat)

There’s no such thing as an improvised fight scene in film. Not only do you need to carefully choreograph your fight scene down to the smallest detail, you also need to dedicate just as much time to practicing the choreography until your actors know the moves inside and out. Check out this interview with Yung Lee (also known as GakAttack) by RocketJump. He offers some behind-the-scenes insights into how they painstakingly choreograph their sequences move-by-move.

Break The Scene Down into Sections

As you can see in this video by Tomorrow’s Filmmakers and in the RocketJump video, fight scenes often break down into sections. These sections are much smaller and self-contained — usually restricted to one or two main actions (like a punch and a block). This allows filmmakers the freedom and control to shoot the same section several times from different angles and find the best shot.

This tutorial by Rustic B, a professional stunt man, explains many of the fight scene tricks of the trade. One of the staple elements of creating realistic (yet safe) fights is the practice of “stacking” your camera shots to make punches look real, even though the actors are actually a safe distance apart. The recommended distance of six inches to two feet can safely sell a punch, as long as the motion crosses an even line across the face or area hit. You can watch the full tutorial below.

Make the Camera Part of the Action

Another popular technique in modern fight scenes is to make the camera part of the action. This usually involves quick pans or tilts that accompany a movement to simulate extra harshness in the strike. Modern audiences are quite familiar with these movements (often without even realizing it). These movements subtly suggest more violence than the scene is actually portraying (as you can see in the GIF above). Here’s the full video by Stray Angel Films.

Cut Out Frames on Impact

You may notice that many intense fight scenes have a jerky feeling, which makes it seem more raw. In this tutorial by FilmRiot, you can learn how the simple act of cutting a frame here and there on impacts can create an extra level of violence, which is easy to notice but hard to detect. Connolly warns that while you can even cut several frames at times, if you go too far and create a noticeable jump, it can ruin the strike for your audience.

At the end of the day, a good fight scene can only be as good as its sound design — which can be a major part of the illusion. However, as you can see in the tutorial by chinfat, a good editor needs to mix in many different layers of sound effects for every motion to give the scene the density that it needs. This includes everything, like hits, tears, cuts, and grunts.

You can check out a full library of combat/fight VFX here.

If you’re looking for more fight scene and action VFX resources, here are some more links to follow:

Do you have tips for filming convincing fight scenes? Let us know in the comments.