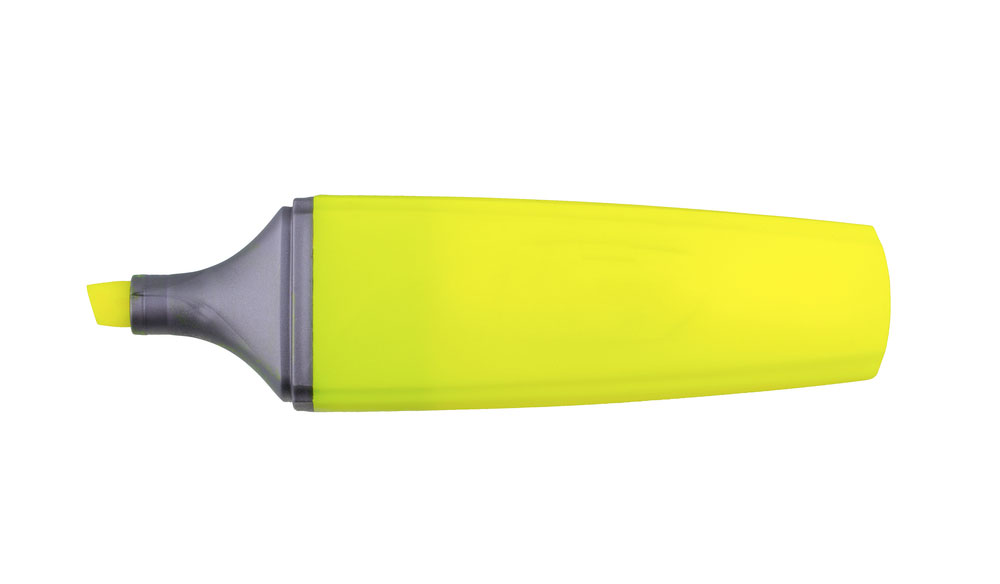 Pre-Production Tips: The Basics of Breaking Down a Script

You’ve got your script, your cast, and your crew, so you’re ready to shoot, right? Not exactly. You need to break down your script first.

Breaking down your script makes you properly list out all of your characters, props, costumes, and set needs — to name a few things. By doing so, you identify what and who you’ll need per scene. A film’s producer typically does a rough breakdown, followed by the 1st AD’s more thorough pass. But with a low budget you may have to do it yourself. There are programs and plugins for script writing software that allow you to do this digitally, but you can also do it manually with markers and highlighters.

Every producer has their own variation on the breakdown, but the following roughly summarizes the typical approach. Using your software or markers, you need to create a legend. The legend should include at least the following: character, costume, props, set dressing, and sound. Assign each of these its own color. 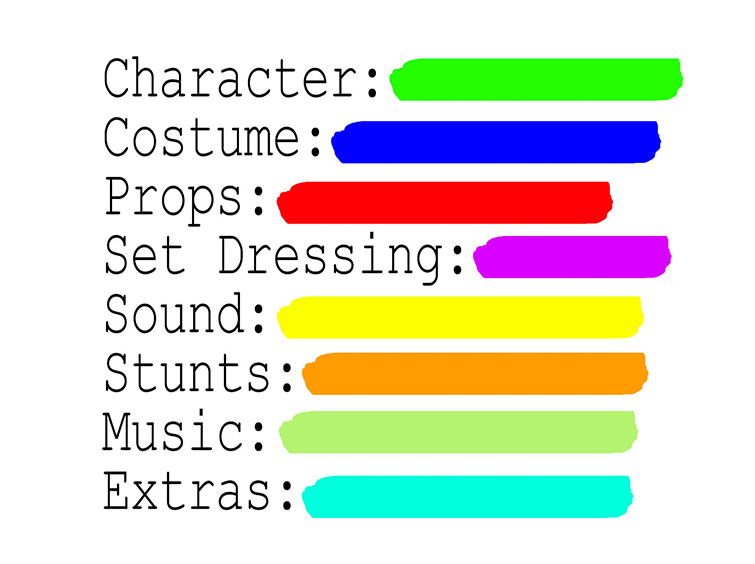 Depending on your script, you may need more. Will there by any stunts? Any vehicles or extras? How about any trained animals? Does the script have any musical cues? Each script has its own needs, so you’ll need to customize your color codes accordingly.

You need to break down the script scene by scene. Move through each scene and highlight the various characters, props, etc., using their designated colors. You only need to highlight them the first time they appear in a scene. (But don’t only highlight them the first time they appear in the script overall.) You need to be able to hand off each scene’s breakdown sheet (more on that in a bit) to each department. Everyone needs to know immediately what each scene needs without referencing the script.

Here is a sample breakdown from my short film “The Accomplice.” 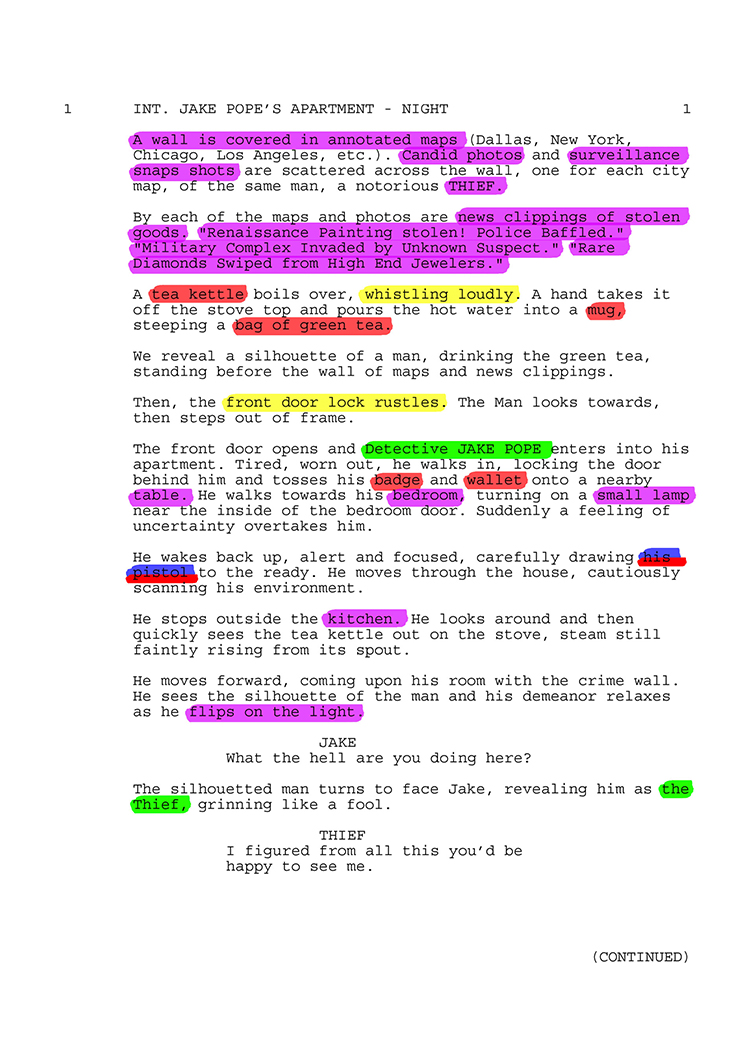 Everyone will have a slightly different approach. Here, I didn’t highlight the “silhouette of a man” because later he gets properly revealed as The Thief, which I did highlight. I double highlighted “his pistol” as both costume and prop because while you don’t wear a gun you do wear a holster. I put “flips on a switch” under set dressing because a light switch is obviously an important part of the environment but not really an item Jake Pope will be carrying around. I also highlighted “bedroom” just as a possible note for the production design department so that they know they may have to dress that room; I did the same for the “kitchen.” The kettle whistling and the door rustling were both important sounds for the scene, so I highlighted them to make sure the sound department knew they’d be capturing those sounds.

As I mentioned before, next time either of these characters or props appears in another scene, I will mark them accordingly and put it in the breakdown sheet. We break down the script scene by scene, not as a whole unit. If a prop returns, you need to note it.

After breaking down the script, you’ll need to organize it. You need to turn the highlighted script into a legible sheet you can hand off to the individual departments. At the top of the sheet, write down the scene’s slug line. Begin filling in the appropriate sections of your breakdown sheet. Which characters appear in the scene? Do they have props or specific costumes? What set dressing appears in the scene?

Here is an example of a breakdown sheet. (I modified a free template from StudioBinder.com.) 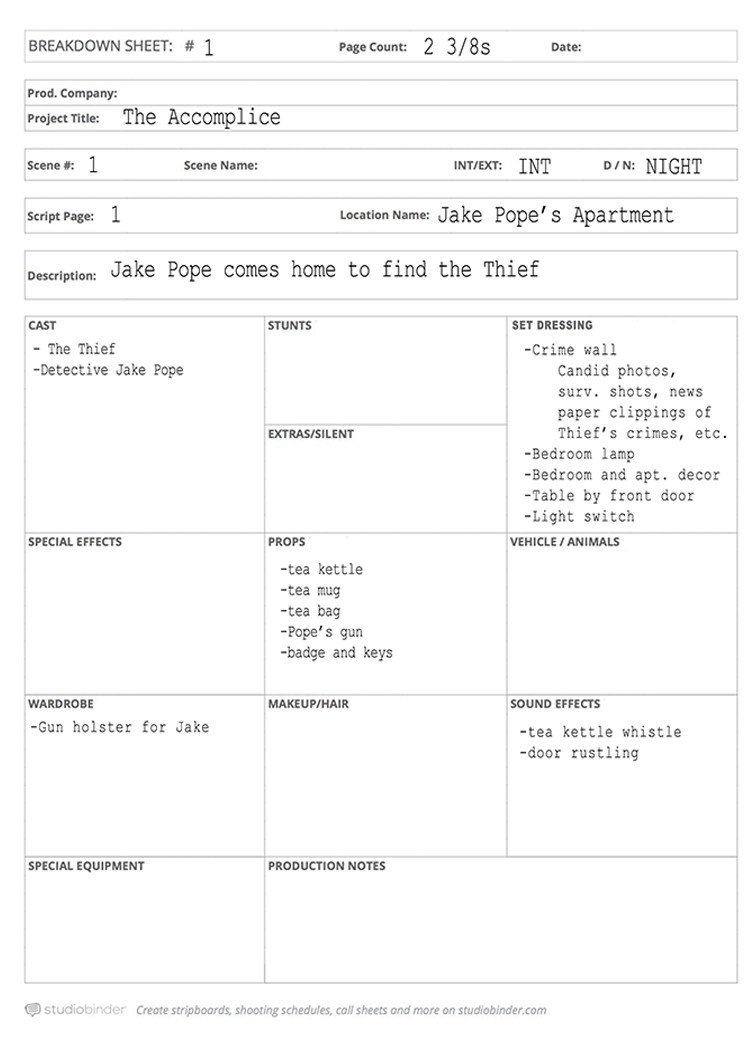 After you’re finished, distribute the breakdown sheet to the various departments. The costume department, prop department, production designer, stunt coordinator, etc. can all reference this sheet and know exactly what you’re expecting from them.

As you can see, the script doesn’t always contain every detail. For instance, this script didn’t specify what type of costume our characters would be wearing. This is something that you’ll want to speak with the director about. What does he or she envision for these characters? The same goes for just about every aspect of the breakdown sheet. Review it with the director and producer to fill in any gaps the script may not detail.

Importance of a Script Breakdown

Breaking down the script facilitates communication — it doesn’t leave anything to chance. You can’t afford to rely solely on memory when filming. And simply mentioning something in the script isn’t enough. It’s far too easy to overlook something or take a prop for granted. When we break down the script, everything ends up on a list, making it easier for everyone to do their jobs.

So does it work? You can see the results of this breakdown in my short film “The Accomplice.” A good breakdown helped us prepare for the production. And once you’ve created your own breakdown and you’re ready to start filming, check out “Getting Started in Effective Low-Budget Film and Video Production.”