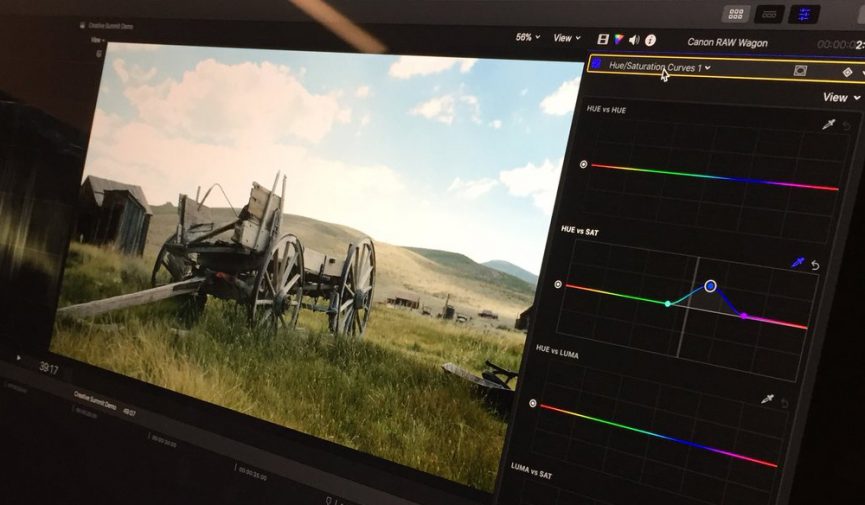 Apple recently demoed its Final Cut Pro 10.4 update, along with the iMac Pro, showing new features and capabilities that might just bring this once popular NLE back from the near dead.

Adobe’s stranglehold on the video editing market got even tighter with the latest updates to Premiere Pro and After Effects as part of the Creative Cloud Suite. However, the once industry standard Final Cut may have some staying power with the 10.4 update.

Let’s look at some of the tools and features unveiled at Apple’s Final Cut Pro X Creative Summit in Cupertino, CA and what they mean for video editors who would love to see Final Cut Pro brought back to life.

Perhaps the biggest news for video editors is the much needed boost to color controls in Final Cut Pro X 10.4. From the looks of it, FCPX is now going to offer your standard color wheel and color curves controls along with expanded LUT options and support. The biggest addition though, which has turned more than a few heads, might be the new auto-white balance tools and a more sophisticated eyedropper that can change a curve’s hue and create control points.

In another bold move, Apple’s Final Cut Pro X makes giant strides into the new frontier of virtual reality editing. You can read about all the bells and whistles of FCPX 10.4’s VR tools in this Medium essay by Alex Gollner, but the takeaway is this: FCPX could easily become the industry leader in VR editing based on its unique handling of spherical video clips as compared to standard NLE flat video clips and timelines. To improve the workflow with these spherical timelines, FCPX 10.4 is introducing a new VR headset viewer so that editors can look around the sphere and make edits in realtime as video is playing.

FCPX 10.4 also offers a new Reorient tool that could be a godsend to VR editors working with slightly off-kilter or awkwardly angled shots.

If you’re serious about VR editing capabilities, keep an eye on Apple as it makes a push in this burgeoning field, not only with FCPX 10.4, but also 360-streaming and stitching in iOS.

While it was announced a little while back, the other big news from the Final Cut Pro X Creative Summit is the new iMac Pro, and more specifically its expanded capabilities to decode RED files in optimized 8K unrendered playback on the FCPX timeline. As reported by TechRadar, the new iMac Pro will come entry level with an “8-core Intel Xeon processor, AMD Radeon Vega graphics, 32GB of ECC system memory and a 1TB SSD. You also get a 27-inch Retina 5K display.”

The price tag for the all-in-one model is rumored to be steep in the $5,000 range. However, with REDCODE decoding and high-resolution optimizations, the iMac makes the perfect partner for a Final Cut Pro X resurgence.

If you’re interested in more news about Apple’s Final Cut Pro X 10.4 update, there’s still plenty to dive into with its updated iOS capabilities, H.265 recording, HEVC support, and more. Here are some great resources to check out, along with our continuous coverage of Final Cut Pro X on The Beat.

If you haven’t already purchased it, you can download a free trial of Apple’s Final Cut Pro X for $299 on their website.