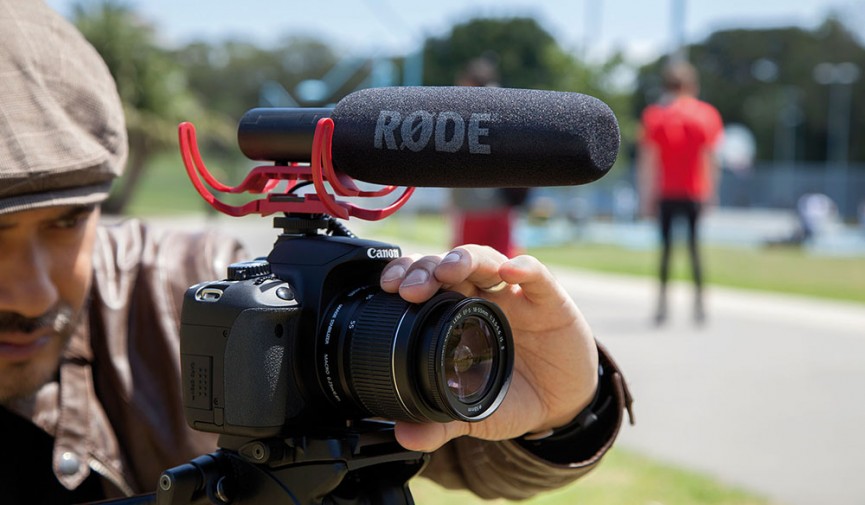 How to Pick the Best Video Production Mic

The most important question you need to ask yourself is: what am I using this mic for? Different productions and scenes call for different mics, so it’s really important to know what the situation is before you purchase your mic. Let’s look at the three major options for mics and what part of the production they best fit into.

Shotgun mics are good for several things on a production set. They get their name from the way they record sound. You point the mic at what you want to capture and it not only gets this sound, but it grabs surrounding sound. You can use shotgun mics to capture the dialogue of a scene or the sound details of a scene. They are also used quite often for capturing foley sounds and ambient room tone. While shotgun mics are extremely good in spaces, they tend to pick up more sound than you need for dialogue. With that in mind, your best bet is to utilize a shotgun mic in conjunction with a lav.

A lavalier mic (or lapel mic) is the gold-standard mic for capturing dialogue. These mics capture incredible audio when conducting an interview for television, documentary film, or industrial video. Lavs come in a wired version and a wireless version, with both versions being small enough to hide beneath the collar of a shirt or on the underside of a jacket. You’ll want to get these mics as close to the center of the chest as possible. Lavs are light enough that a little gaffer tape will be all you need to stick the mic under your subject’s shirt. Just remember to be courteous and professional when applying a lav mic.

Video mics are a type of shotgun mic, but these particular mics aren’t really for capturing the final audio for a production. They connect straight to the camera in order to capture scratch-track audio that will allow your editor to easily sync the video and high-end sound together in post.

Once you know what your production needs are, you can begin searching for mics — but there are just a few more questions to ask before you make your purchase. Before we get to those questions, let’s check out this video from Film Riot where Ryan Connolly gives us some advice on mics for production.

2. What’s the Size of Your Production and Budget?

Answering this question will go a long way in determining what you need and what you can afford. No matter if you’re working with a large budget or an indie budget, there are options for you to get quality production mics to capture your audio. Just be wary of breaking the bank as Film Shortage recently pointed out.

If your camera costs a couple hundred then it’s not really worth buying a microphone that sets you back a couple of grand, as the quality of the two won’t match up.

The key here is to be really sure that you set a budget for yourself and stick to it. Audio equipment can get expensive without you realizing it, so make sure the production mic you’re selecting will do the job you need it to do. Again, let’s check out this video from Ryan Connolly and Film Riot as he runs through specific production mics.

3. Be Mindful of Pickup Pattern

Pickup pattern is how well a microphone hears different sounds from different directions. Depending on what you’re recording, you’ll want to look at the pickup pattern before making a determination on what production mic to purchase. Knowing the directional response of your mic will help you tremendously when going into production. Let’s go over those pickup patterns and help you learn what mics are what.

Omni mics are beasts. They capture audio in a circular pattern, which means they are pulling sound from all directions. Because these mics are pretty much a catch-all mic, they’re often used as the built-in microphone for most cameras. You can also use a standalone omni mic when you need to cast a wide audio net. Its ability to capture a wide range of audio has made it a favorite to documentary filmmakers who want to capture wide audio during observational moments. There are also some lavalier mics that are omnidirectional as well.

Bidirectional mics are great mics to use when needing to capture ADR (automated dialogue replacement). The directional pattern for these mics comes from the left and right side, while the range from top and bottom is minimal. Other than ADR for film and animation, these type of mics are used quite often in music recordings.

When you think unidirectional mics, you can think shotgun mics. As discussed above, you point the mic at what you want to capture and it not only gets this sound, but it grabs surrounding sound. These mics are often used for capturing production audio on set and for recording foley and ambient sound as well.

Cardioid mics make up the majority of the handheld mics that we use. They capture sound in a odd pattern, which is usually described as being heart-shaped. These types of mics are great for capturing vocals and come in many different shapes and sizes, from the standard mics for singers to lapel mics used for interview dialogue. For an in-depth look at each one of these pickup patterns, let’s check out this great overview from Videomaker.

4. There Is No Such Thing as a One Mic Shoot

Well, okay. Technically there is. But this is something I learned early in my career: no matter if you’re a big-budget filmmaker or an independent videographer, you’ll want to capture dual audio. This could be as easy as running a video mic in conjunction with a shotgun mic. As we mentioned above, this will allow you to capture scratch-track audio and pro audio for final editing.

Just remember that you want to capture the best audio you can. Great audio will go a long way toward masking a lot of mistakes. As Scary Cow points out in an article on recording amazing audio for low-budget productions:

Horrible picture can be passed off as “style” when accompanied by perfect audio, but poorly recorded and mixed audio will make a great picture seem amateurish and poorly-executed.

So again, be sure to use all options available at your disposal. Redundancy is a good thing when talking about production audio. don’t just slap a lav on the talent. Also use a shotgun mic on a boom pole to get an extra layer. If your camera doesn’t capture scratch-track audio, connect a mic to it. Three solutions for one sequence. It sounds like overkill, but when the time comes to edit the film, the editor has a lot of flexibility. This is a good thing.

5. What Mic Accessories Do You Need?

Just getting a video production mic alone will get you rolling, but you’re going to need a few accessories to achieve optimal quality. Here are a few items that will help in the long run.

Shotgun mics alone aren’t going to get you the quality audio you want. One of the first things that you’ll want to grab is a quality boom pole. Then you’ll want to protect your mic, so look at getting either a Rode Blimp or a standard windscreen. The Blimps usually come with a pistol grip and shockmount. If they don’t, you’ll want those as well. K-Tek also makes a fantastic collapsable boom pole that’s more flexible than the standard pole.

Lavalier mics don’t have as many accessories as shotgun mics, but there are a few things that are absolutely necessary to have before you record. At some point you’re likely going to need to go from a mini 3.5mm adapter to an XLR male adapter. Your lavalier mic will more than likely come with its own windscreens and clips, but trust me… at some point these are going to just get up and walk away. Invest in extras. Lastly, you’ll want some trusty gaffer tape. This comes in handy when your wanting to mic up your talent with a lav mic.

What video mic do you use most often? Are there any additional considerations that you take into account before springing on a mic? Let us know in the comments below!