Keeping a project clean and organized is essential. Spend less time searching for assets and more time editing. In this post, we share organization tips and a free project file.

If you’re going to call yourself a professional, you should work like a professional. An insanely disorganized project is a nightmare, and ultimately reflects poorly upon you as en editor. We bring in freelancers pretty regularly at my office and if I’m given the choice to bring back a great editor who leaves a disaster of files and other mess in their wake or  a slightly less great editor who keeps things in order and under control you can bet I’ll choose the organized one every time. He or she makes it easier for me to quickly pick up the project for later revisions if necessary.

In this post, I want to share a structure for  how I like to organize my video editing projects. This is an empty skeleton that I use as a basis for all projects, then fill-in as needed:

Here’s how I use these bins, including the thinking behind them:

Generally, nothing goes in the top-level Audio folder. Everything should be sorted into the appropriate subfolder: Music, SFX (Sound Effects) or VO (Voice Over).

Sometimes labeled as “Sequences” by my coworkers, this bin should have the most current version of the project directly inside. Previous/outdated versions should be put in the Archive folder for reference if needed, but out of the way of the current version so that there’s no confusion if another editor has to pick up the project.

The Selects bin is for timelines containing your top picks from the footage, organized by B-Roll, Interview (organized by interviewee, question/topic or lumped into one), Scene X, Y, Z, etc.

All project footage goes into here. If I have to sync audio and make merged clips, I typically make a Raw bin and a Merged bin within the Footage bin. Otherwise, I just break up by card, reel, day, subject – whatever makes the most sense for the project.

This bin is used for assets that aren’t based on footage and are generally computer generated: titles, adjustment layers, logos, lower thirds, motion graphics, etc.

This bin is used for assets that are based on footage, but aren’t raw footage themselves. An example would be a keyed and rendered green screen shot, a shot that’s had matte painting or wire-removal, etc. I also use this bin for things like film grain (Cinegrain, Gorilla Grain, et al.), lens flares, light leaks, etc.

All I have to do to keep my project organized is drag to the right bin when I import my assets. Super simple. That structure covers the major things that I encounter in most projects, and I can add bins when I hit something new. Below is an example of how I’ve used these bins in a project. Click image for larger view. 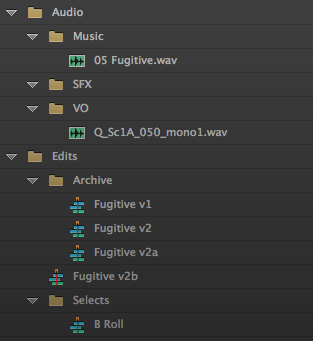 Organization should be a basic skill for any video editor. That said, I know a lot of editors just aren’t organized, no matter how much they want to be. It’s often due to laziness (they don’t want to take the time to make bins) or having such a tight deadline they don’t keep things organized during the video editing process.

The best way to combat this tendency (whether you have that tendency, or a coworker or employee has it), is to take the majority of the work of out organizing your project. A blank project with these bins already in it is a great thing to keep handy. Just duplicate the project file for every new project and you’re all set up. All you have to do is watch where you drag.

Quick Tip: If you’re working in a multi-editor office, take a screenshot of the bin organization structure and distribute it to every editor. Laminate it and post it up at every video editing station so that each editor will use the same structure throughout their edit.

As a little time saver and incentive to keep you and your fellow editors sane, you can download a Premiere Pro CC project below with this bin structure already set up. As an added bonus, it comes set up with one of my favorite Premiere Layouts that I’ve worked up (assuming you have Premiere set to import workspaces). Happy editing!