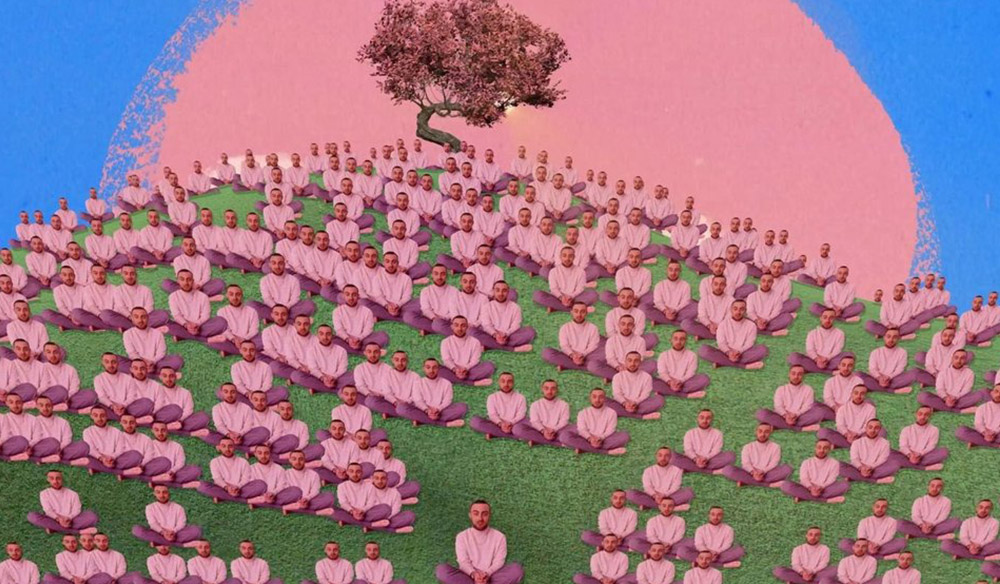 American rapper/singer-songwriter Mac Miller was working with producer Jon Brion on his sixth studio album, Circles, when he died of an accidental drug overdose in 2018, at 26. Brion, a composer and singer-songwriter himself, completed the album, which was released posthumously in 2020.

The second of what was meant to be a trilogy of albums, Circles followed the release of Swimming, in which Miller bared his soul about his breakup with Ariana Grande and his struggles with depression and self-acceptance.

Wake up to the moon, haven’t seen the sun in a while. But I heard that the skies still blue, yeah.

Emotional and honest in many of the same ways, Circles is a mix of introspection, pain, and hope. Anthony Gaddis and Eric Tilford directed the six-minute music video that accompanied the album’s first single, “Good News,” which opens with Miller inside his studio, before following him through a door into an abstract world of landscapes and memories.

We asked Tim Clapham, Luxx’s founder/creative director, and digital artist Jon Lutjens, who also contributed to the project, to talk about their processes and experiences. 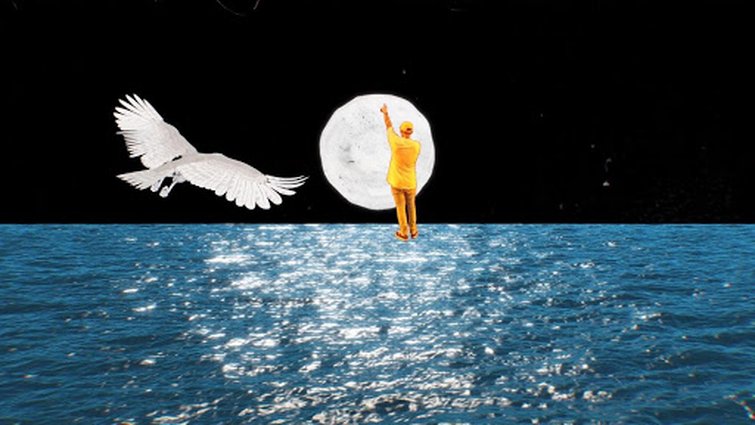 Colorful collage-like imagery can be seen throughout the entire video. Image via YouTube.

Rather than answering specific questions for this story, the video’s directors, Gaddis and Tilford, wanted to say this:

We worked closely with Malcolm to develop the visuals for Swimming and Circles, so approaching “Good News” was almost indescribably challenging for everyone. We wanted to — needed to — do more than a “tribute video.” We owed that to Malcolm, we owed that to his family, his friends, his fans, and the label.

We did our best to create something that would touch all of those divergent aspects, something that could allay the grief just enough to make an opening for the music to take hold so Mac’s magic could work to heal us. There were moments throughout the production that we felt input from Malcolm. We’re grateful for the trust and support from 4 Strikes, the McCormick family, and the team of creatives that poured their souls into the making. 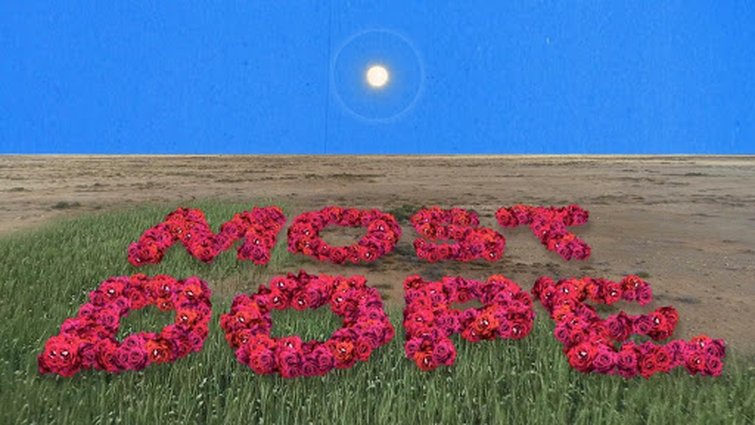 The video was as much about the healing process as it was the music. Image via YouTube.

PremiumBeat: Tim, how did Luxx get involved with making the “Good News” video?

Tim Clapham: We worked with Eric and Keith Tilford on a previous Mac Miller video, “Come Back To Earth,” from the Swimming album, which was released in late 2018. Language Media contacted us early on to see if we would be interested in working on the video together. We felt so incredibly honored to be considered for this posthumous release and knew immediately how important our job was for Malcolm’s family and his huge fan base.

PB: How did they describe what they wanted for the video?

TC: They sent us draft concepts in a rough storyboard that was developed by Eric and Anthony, whom Eric introduced us to once the project got started. When Luxx came on to the project, there had already been some development and Anthony sent us over a bunch of his early tests. They were a combination of visual styles cut and pasted together into an animated collage that felt very raw and fresh. We were very excited to be involved. 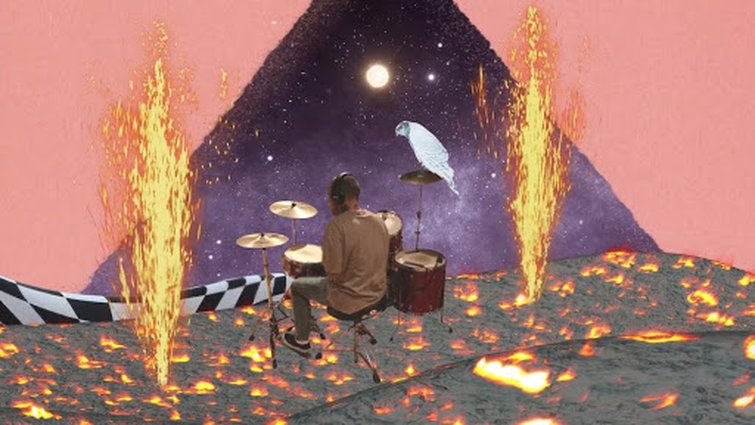 A combination of visual styles went into the animation of this video. Image via YouTube.

Our first task was to help out with style frame development for the pitch to Warner Bros. We developed some shots for the diver in space, working on the look of nebula and other worldly things. Our aim was to create something beyond real, full of awe, like stepping into the fantastic. Once Language Media got the green light, the directors selected a collection of shots for Luxx to complete, and they also asked us to contribute elements to other shots throughout the piece. Eric and Anthony were fairly descriptive with their requests, but they also gave us a lot of freedom to create our shots.

PB: Several artists contributed to the video. How did you all collaborate remotely?

TC: With Luxx based in Sydney, Language Media in L.A., and the other artists scattered around the globe, it really was an international collaboration. We used Google Hangouts and Skype for chatting, and Dropbox for syncing most of the media and ideas. Towards the end of the project, Language Media sent us the complete project and assets via FedEx, so we could composite our shots into the project and send it back digitally. At one point, we were swapping After Effects projects daily and that worked nicely between Sydney and L.A. because of the time difference. 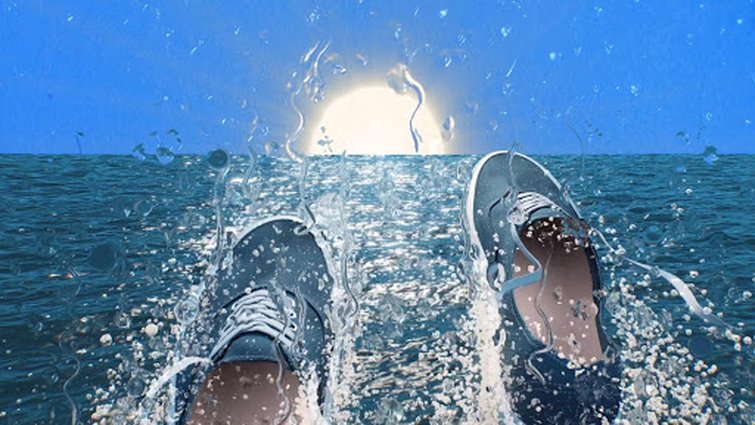 Several artists from around the world collaborated on this project. Image via YouTube.

We brought Kidmograph (Argentina) and Rich Nosworthy (New Zealand) on to the Luxx team to help with our shots. Both of them are absolutely great to work with, and very talented and respected artists in the industry. My wife, Fleur, worked as producer here in Sydney and would liaise daily with Language Media Producer Dan Glasband.

PB: Jon, talk about your contributions to the video.

Jon Lutjens: One of the joys of working with animation software is the myriad of tools and methods that can be combined and altered to achieve the goals of a given project. It’s easy to obsess over the process but, sometimes, investing a great deal of energy in getting a process “right” can actually hamper your ability to bring a piece to where it needs to be. Most of the scenes I worked on were a hodgepodge of methods that jumped back and forth, and then on to a third and even fourth option. 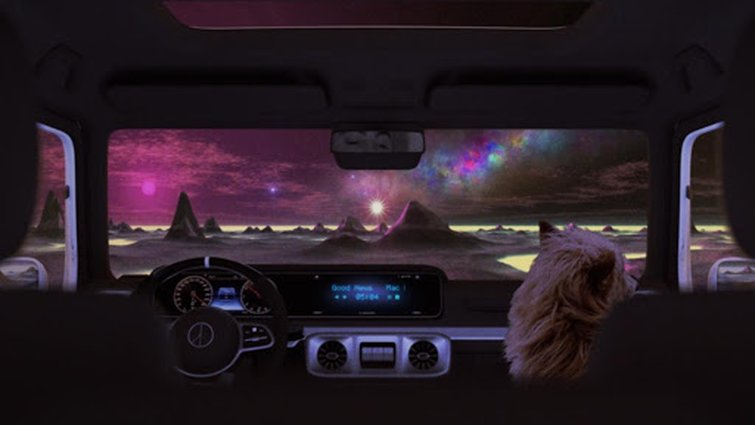 Animation software was a heavy contributor to creating this scene. Image via YouTube.

The setup for the mountain scene was pretty convoluted and chunky, but it allowed Anthony to see how a particular scene was developing and make changes on-the-fly. We set up a camera move in Cinema that pushed in and over each individual mountain. Then, we rendered the mountains with eight to ten different textures so we could experiment with the various looks in After Effects. We used the imported camera from Cinema to begin to composite images of Mac, and other elements, onto our mountains. While we were honing in on our final mountain textures, we also introduced 2D animation to our mountain renders to get the right movement and timing. 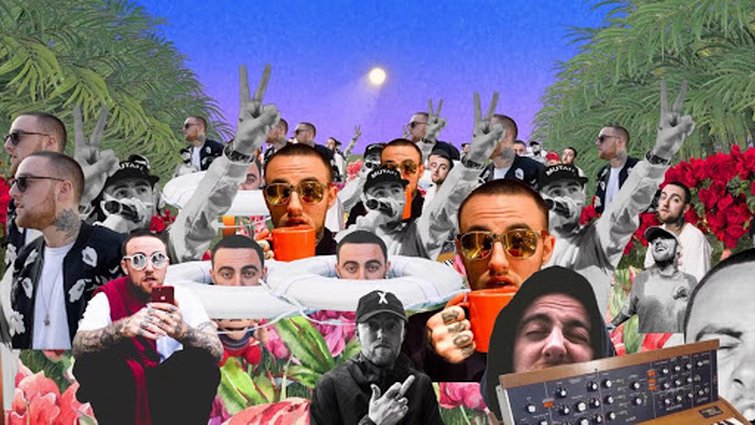 Originally, both a 2D and 3D version of this scene was tested. Image via YouTube.

The Mac parade scene was both a huge challenge and a real joy. We spent a number of days slogging through a variety of tests to try to get the right movement, speed, perspective, and density of images.

We thought After Effects would offer the simplest path, so I set up both a 2D and a 3D version of the scene. The 2D version didn’t last long. The file that was used to generate the flowers underneath the images of Mac served as the base project for the parade. Once we adjusted that setup to accommodate the new images, it was a pretty smooth path to get to the ideal animation. After that, it was simply a matter of deciding which images of Mac would be best for that scene.

PB: Tim, which scenes did you find most interesting and challenging to work on?

TC: The eight-bit scene with the G-Wagon was interesting, as the original reference included a Kidmograph piece. Eric and Anthony loved the retro style and Kidmograph owns it. We thought the best thing was to approach KM directly and, unfortunately, he was incredibly busy working on a music video at the time. Lucky for us, he offered a few days of his time and built us a bare-bones scene in his unique style, and then passed Luxx the Cinema 4D project file to complete the shot in-house. 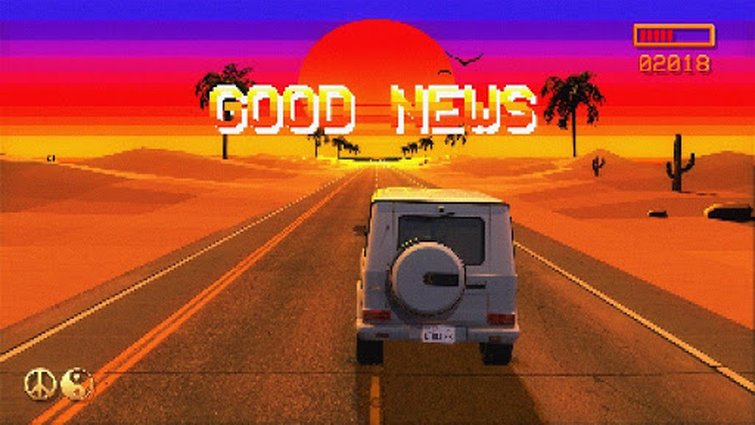 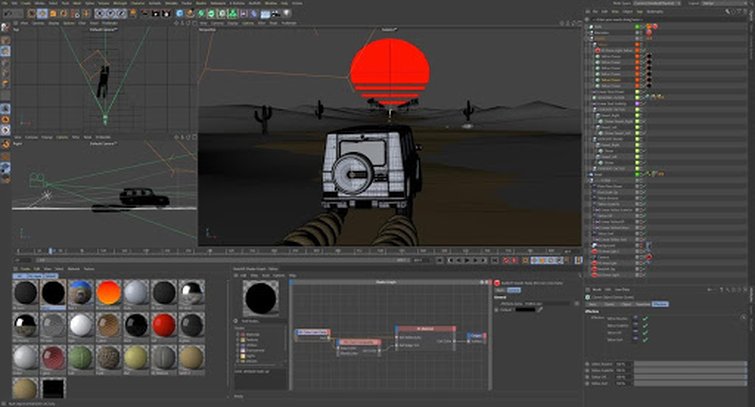 Kidmograph spent a few days adding his unique style to the video. Images via YouTube.

The diver scene was a big shot that required a lot of R&D because it was particularly challenging — because of the content and its duration. We originally pitched a thirty-second shot for that section, but it quickly evolved into a one-and-a-half-minute shot, flying through dense particles, constellations, and volumetric nebula.

The complete diver shot was built in one scene using Cinema 4D and X-Particles. We used OpenVDB to create the vividly colored volumes and Rich made some unique shapes using geometry combined with the Houdini Cloud tools, which we exported as OpenVDB and rendered in Cinema 4D using Redshift. 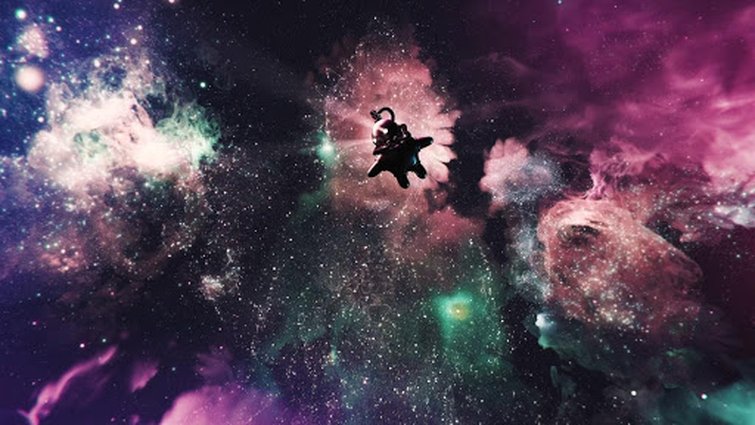 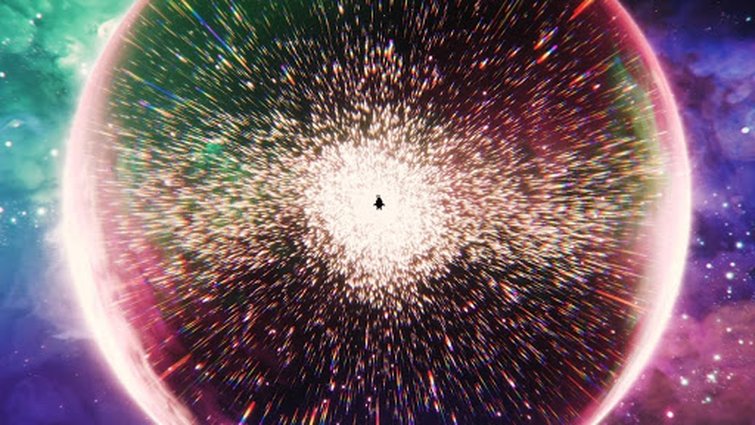 This challenging scene produced a fantastical world of moving imagery. Images via YouTube.

It was also fun trying to track some of the 2D composites, which were a mishmash of different clips and perspectives bolted together. That pasted-together environment really needed to be tracked manually by eye. And, I think the elements slipping and sliding together in places really added to the journey, as all of the incongruous elements come together to create fantastical worlds.

Creatively, this project was such a wonderful combination of elements and, in some ways, it is almost anti-composite, with many scenes breaking the rules of how a shot would traditionally be composited together. Leaving blue spill around the edge of keying, mixing obvious 2D elements with 3D, and sliding textures and surfaces — all of that made for an incredibly interesting journey. 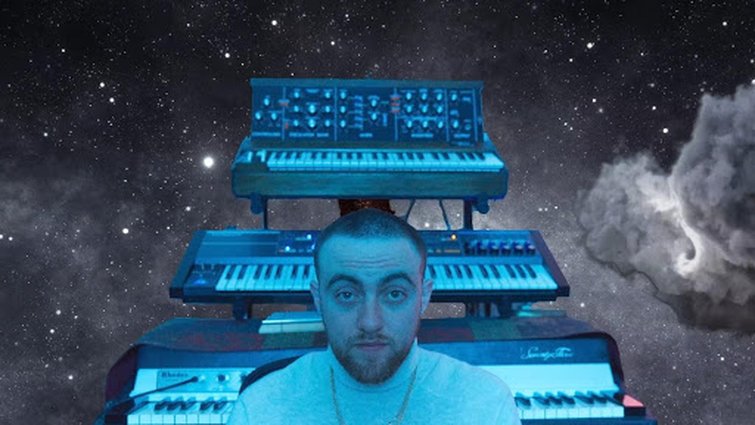 The pasted-together art involved in the making of this video adds to the magic of its journey. Image via YouTube.

PB: What was it like to work on this video, created after Mac Miller’s death?

TC: Working on this project definitely had a profound effect on me. I listen to Mac Miller all the time now, his words and music hold a special place in my heart. It’s sad that I didn’t find his music until he passed, but it is a beautiful thing that his music will live on for everyone to hear. 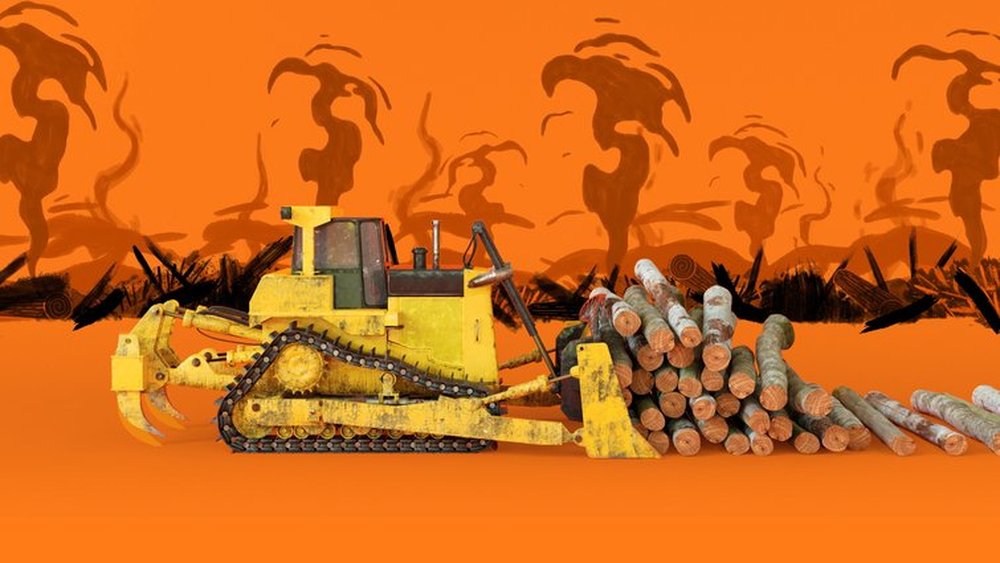