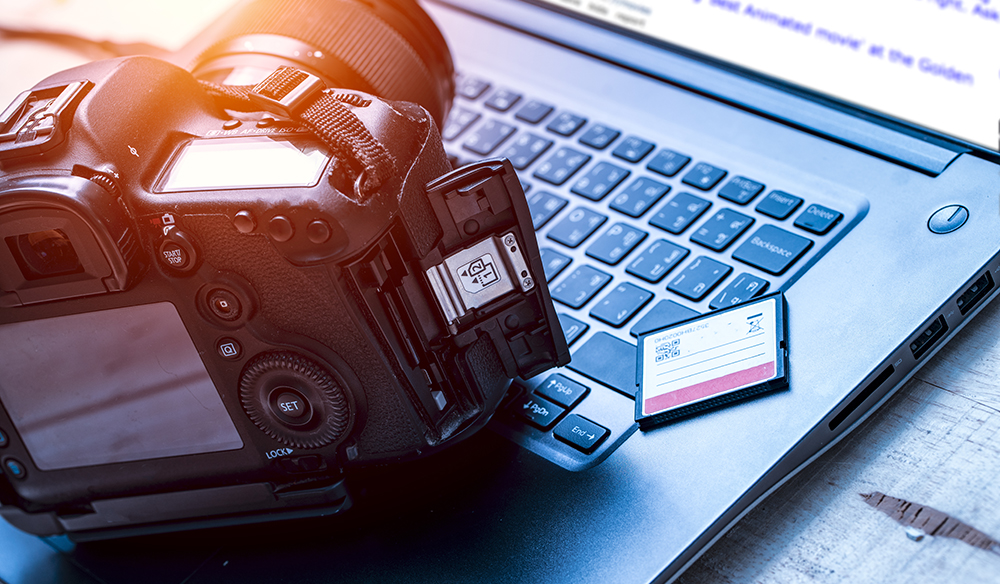 Everything You Need to Know Before Posting Your Videos on Reddit

The allure of Reddit’s front page may be great, but reaching it is easier said than done. Here’s everything you must consider before posting your videos.

The Reddit community is as vast as it is fickle. Having a video of your creation climb across its various subreddits can garner thousands of views, likes, and comments and can turn even the most unassuming videos into viral hits. However, on the flip side, the community is built to be an aggregator and forum for found content, not shameless self-promotion — and there are several built-in failsafes to keep it that way.

Before we get into the recommended posting strategies and etiquette, let’s take a look at what makes Reddit unique. 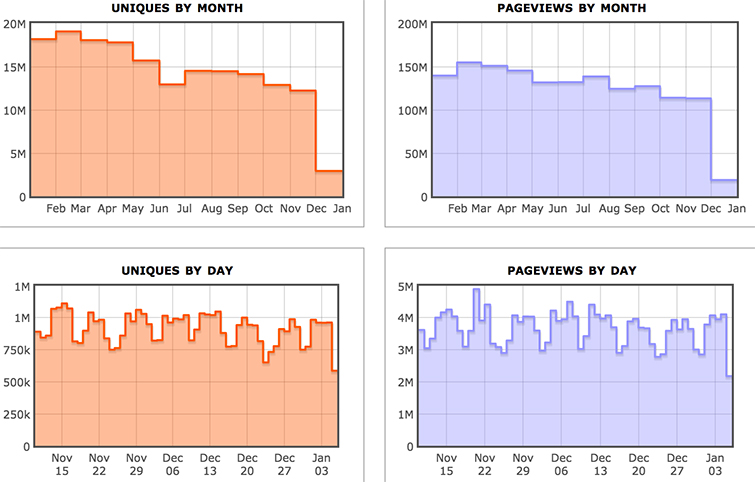 By Reddit’s own metrics (featured above), the site averages almost one million unique page views a day. The site currently sits as the Alexa-ranked 24th most-visited site on the internet across the globe. However, despite its popularity, it still retains its close-knit aesthetics and serves more as a community bulletin board than social media platform. This means, if you are looking to post your own videos, you’ll need to learn how the community works. 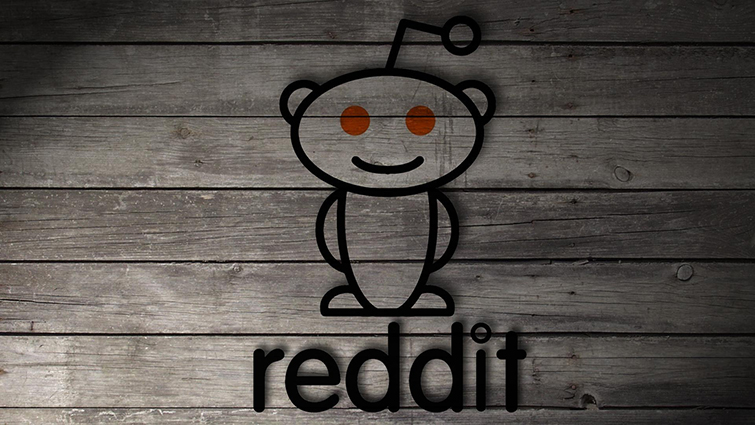 This is actually a bit of a misnomer — while Reddit as a whole can be understood as a community (which it is), it is actually (and more accurately) a conglomeration of hundreds of thousands of smaller more specific, niche communities housed within.

If you look from a front-page down perspective, it really is quite amazing how each individual community can be wholly unique, yet still retain so many of the same nuances that define the entire congregation.

Reddit entries are organized into areas of interest called “subreddits.” Originally, the front page was the “main-reddit,” and other areas were “subreddits.” There is now no longer a single main-reddit. Instead, there are now 50 “default subreddits” dealing with topics such as books, television, and music, and thousands of additional non-default subreddits. — from the Reddit Wikipedia page

Within the subreddits, you can find communities organized by locale, professions, hobbies, and interests common and bizarre. Depending on your inclinations, you “subscribe” to various subreddits and build your own unique main-page and Reddit experience. For example, if you are interested in filmmaking and videography, you can subscribe to /r/filmmakers and /r/videography.

Finding subreddits in which you share interests and knowledge is an important first step for you to make connections and start building your karma (more on that later). 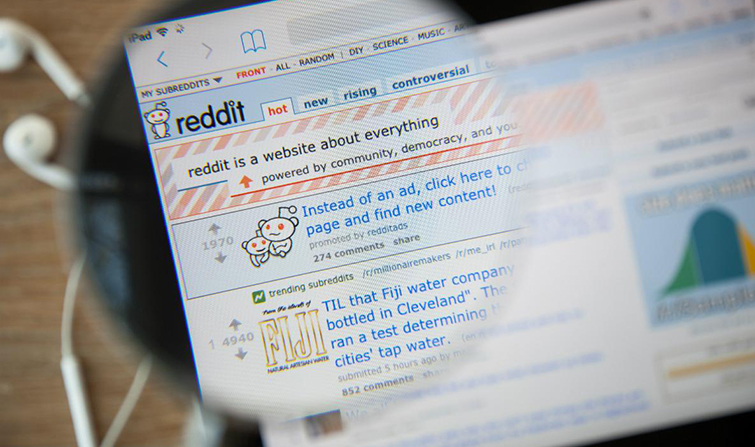 Reddit comments and submissions are occasionally abbreviated and peppered with terms that are understood within (and in many cases also outside) the Reddit community, ranging from OP (for “original poster,” the user who posted the submission being commented upon) to NSFW (for “not safe for work”). — from the Reddit Wikipedia page

If you are completely unfamiliar with Reddit, you may want to spend some time browsing the front page and various subreddits in which you may be interested to get a gist of how people post. However, to be extra helpful, the subreddit /r/TheoryOfReddit has a partial glossary of many of the terms and acronyms.

Along with understanding the communities and speaking the language, it’s important to learn and practice proper etiquette (or reddiquette). Again, you’re in luck, as Redditors have compiled and laid out a canonical list of “Please do” and “Please don’t” rules to follow.

With the eventual goal of sharing your own videos as posted content, it’s important to note the following:

Feel free to post links to your own content (within reason). But if that’s all you ever post, or it always seems to get voted down, take a good hard look in the mirror — you just might be a spammer. A widely used rule of thumb is the 9:1 ratio, i.e. only 1 out of every 10 of your submissions should be your own content.

The 9:1 ratio is the real kicker, and if you’ve tried to post your own content before only to be down-voted and possibly heckled, it’s the rule that can quickly get you into trouble. Which leads us to how to avoid such problems.

Why should I try to accumulate karma? Why should you try to score points in a video game? Why should your favorite sports team try to win the championship? Or, to look at things from a less competitive and more altruistic perspective, read what philosophers have said about the matter — namely, don’t set out to accumulate karma; just set out to be a good person, and let your karma simply be a reminder of your legacy. Note: reddit makes no guarantees about attaining Nirvana. — Excerpt from Reddit FAQ

Despite how Reddit may attempt to soften it, “Karma” is the underlining currency of the Reddit community and determines the success of a post by dictating how high up it will be placed on any given page or post. It is also crucial in regard to your username and what/where you are allowed to post and how your account will be judged by others.

For example, to post in the hugely popular (and tightly moderated) /r/videos subreddit, you must have a score of 10 link and 10 comment karma. If you try to post without accumulating, you’ll get this message.

Thank you for your submission. Unfortunately your account does not have enough karma to submit things to /r/videos at this time.

/r/videos requires users to have a minimum of 10 link and 10 comment karma. We suggest that you comment in some popular threads and make submissions to other subreddits to build up your karma and then come back.

This is one of the failsafes to keep spammers and bots from pestering the boards with links to unauthentic websites and posts. So, to build your karma, you’ll need to go back to those smaller subreddits (like the ones mentioned before) to post and comment as you see fit.

Again, this isn’t meant to deter you from sharing your work per se, it’s actually meant to force you to engage and share meaningfully within subreddits of your interest. You can think of it as a training grounds to practice and learn what types of posts and titles work best for you.

Outside of sharing your own videos, you’ll want to post relevant links to pages, images, and videos related to your various subreddits for a while. While there is no exact science or formula behind what, when, and why certain posts do well and earn good karma, there will always be those who try. Here are some findings from blogger (and Redditor) Randy Olsen. 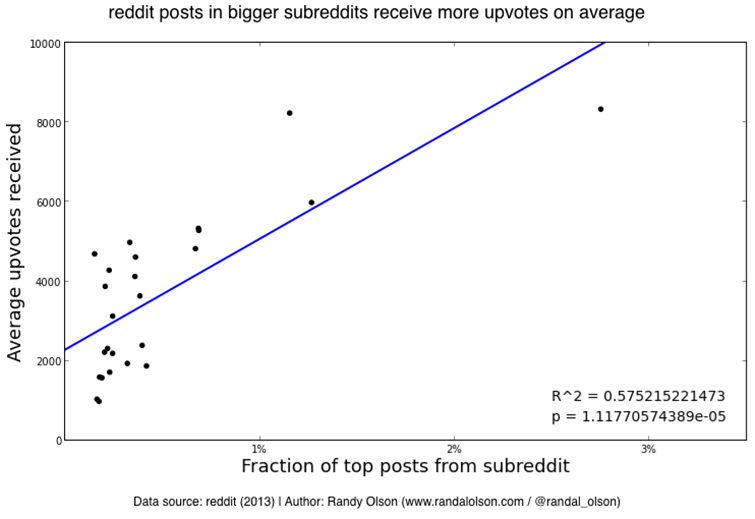 While this may seem obvious, it’s actually quite interesting. In general, posts on the larger subreddits receive more upvotes than on the smaller ones. While communities will vary in how supportive they may be, it comes down to a cross between a high relevancy/interest in a post and perhaps pure luck. Also, if you’re shooting for the stars, the larger subreddits will be exponentially more likely (or, conversely, less likely) to take off based on sheer volume potential. 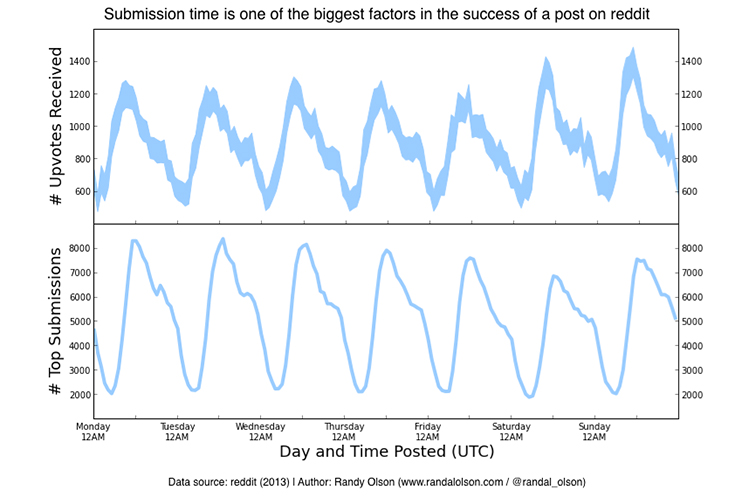 While Reddit has now become a global phenomenon, it still leans heavy toward its audiences in the US and Europe. If you follow the trends, your best windows for posting would be on weekdays for the early US crowds (7AM-8AM EST) and avoiding nights and weekends. However, if you feel you know your communities, certain “down-time” posts can become quite popular as well. 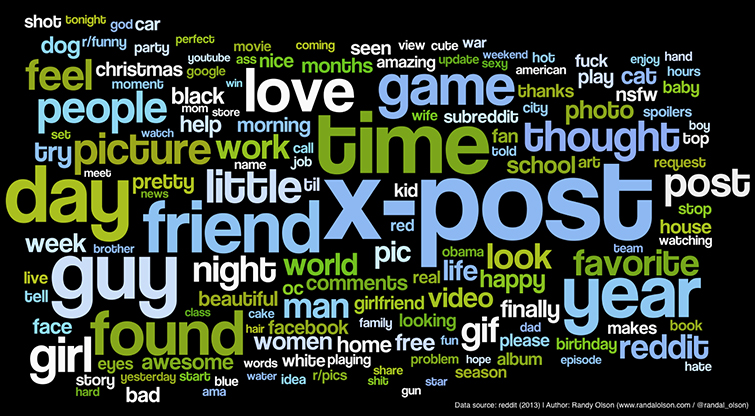 Similarly covered in the language and reddiquette, titling your Reddit posts can be paramount to its eventual karma success. As you can see in the word cloud above, while titling is endlessly diverse, there are some major themes which you can tap into.

Once you’ve successfully navigated Reddit for a while and built up your karma, you should be able to post your own videos and unique content sparingly. Hopefully you will by then fully understand the intricacies of doing so, but the basics will remain the same for posting a video.

Yes, if you see fit, you can host your video on other sites like Vimeo or others, but the vast majority of video content is shared on YouTube. In fact, from Randy Olsen’s same research, YouTube is actually the number one link domain shared on Reddit by a pretty wide margin. If you’re serious about going viral and reaching the front page, YouTube would be your safest bet.

Like the research above, the highest likelihood of your post taking off would lean in favor of posting on one of the major subreddits. Some of the most trafficked suitable for video would be /r/funny, /r/science, and obviously /r/videos. You can also view a realtime list of the top subreddits to search for the right one for you.

Once your post is up and your video is out there for the whole Reddit community to view, it can be important for you to stay engaged to monitor and reply when necessary. This is not always the case, but in general reflects good practice as a way to explain (or perhaps justify) what it is you posted and why you think it is of interest. 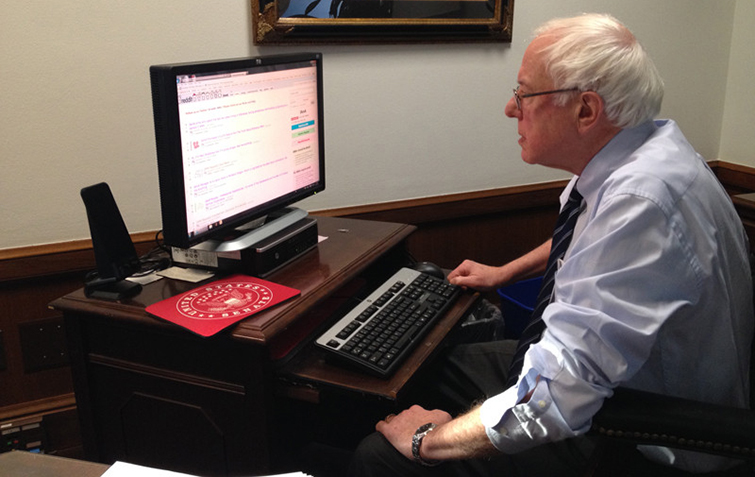 Posting to Reddit can be quite intimidating for those who have not been active and immersed within the community for several years. Although posts seem to go viral out of the blue, it really depends on the climate, quality of the content, and many elements of right place at the right time-ness. Short of picking the brains of the 234 million unique monthly users, here are some things to consider.

If it doesn’t seem to be of value or interest to others, or need to be presented as a video format altogether, why not consider sharing the content as an image or GIF?

Hopefully, for those first time Redditors or occasional lurkers, this will be a helpful guide for building your karma and creating positive-karma producing posts. If anything, it will encourage you to become more engaged with your communities and explore the site, which can be quite entertaining and informative (if not a complete time suck) moving forward.

Tl;DR: Reddit isn’t meant for you to shamelessly plug your videos. However, if you care enough to join the communities and contribute to various subreddits in which you are knowledgeable, you can occasionally share projects that you are passionate about and hope they may be potentially rewarded with upvotes.

How have your Reddit posts faired? Have any additional tips? Let us know in the comments!