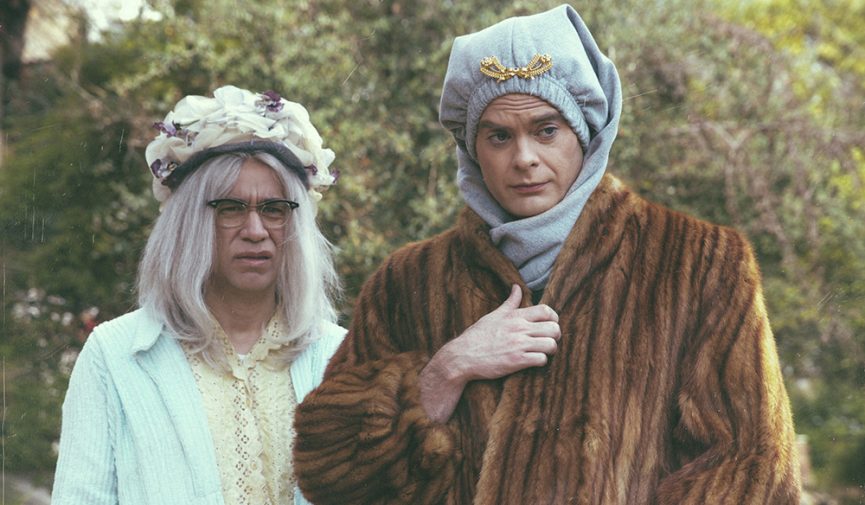 Retrograding Digital Footage with the Editors of Documentary Now!

Want to get your DSLR video to look like vintage 16mm black and white? Let’s explore how to retrograde digital footage with the editors of the mockumentary IFC show Documentary Now!

There are plenty of reasons for retrograding footage to make it look like it was shot forty years ago and on film. One of those reasons might be because you’re an editor for IFC’s mockumentary television show Documentary Now! starring Bill Hader and Fred Armisen. Another reason might be because you think it looks cool.

Regardless of your reason, background, or editing prowess, if you’re curious, it’s actually a pretty fun problem to solve (and surprisingly not that difficult). Here’s a sneak peek into how the Documentary Now! team works.

If you’re interested in retrograding your footage, whether in Adobe’s Creative Cloud or organically, here are some techniques to consider.

Like the Documentary Now! team shows, you can do some basic retrograding in Adobe’s Creative Cloud, including in their flagship program Premiere Pro. Evan – Creative Tuts gives a breakdown on how to add background scratches and tone tints to manipulate your footage to look like it was filmed on an old-timey video camera. It’s a quick technique for punching up flashbacks or faking old footage.

Vintage Effects in After Effects

If you’re looking for a little more control to stylize your retrograde, working in After Effects will probably be your best bet. Luckily, one of our PremiumBeat contributors has created a tutorial that shows you how to build a couple of different vintage looks into your project. You can view the video above and follow the links in the bio to download the free assets and presets to help you along your way.

Along with presets for After Effects and Premiere Pro, there are also resources available for creating similar retrograded looks in Apple’s Final Cut Pro. This Shutterstock tutorial shows how to install and use ten free presets to quickly upload and retrograde your footage for a variety of vintage and retro looks.

If you’re still looking for some more assets and presets to overlay on your footage, here are a few more free PremiumBeat assets and tutorials (like the 1980s style logo reveal above). Hopefully, with a little creative inspiration and a good base of resources, you can retrograde your digital footage to mirror the same styles as those seen in the classic clips from Documentary Now!

Have any other tips or tricks for retrograding footage? Let us know in the comments.