Setting up for Multi-camera Editing in Avid Media Composer: Part 1 of 2

Make sure you get yourself set up right for multi-camera editing in Avid Media Composer!

This is the first part in a 2-part series on multi-camera editing.  Check out Part 2 here.

With the advent of multi-cam in the 1950s, both production and post-production changed completely.  All principle shots (LS, MS, CU) could be captured in a single performance—in live or studio-recorded settings.  Hours of production time were eliminated because the scene didn’t have to be re-lit and re-set for each take, and directors were able to call shot switches on the fly.  Further, editors were able to edit a scene without the typical host of continuity issues that are common in single camera shoots.

Over the years, there have been numerous phases of popularity of multi-cam for television shows, but it has remained a staple for event videography and editing.  Let’s take a look at how multi-cam is shot, and then we’ll take a look at how to set everything up in Avid Media Composer.

Here is a typical multi-cam setup: 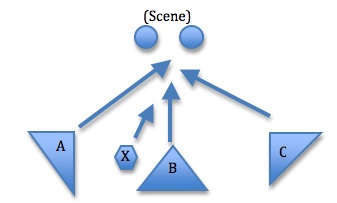 Each of the above shots must be synced in some way – usually by identical timecode or by a slate/clapsticks at the head of each shot.  In this way, they are grouped to form one synced cluster of shots.

After a scene is shot in a multi-cam environment, the footage must be captured/imported into Avid Media Composer, and the shots must be grouped and synced.

To Create a Group Clip using IN points:

Setting up your Multi-cam Editing Environment

Once you’ve grouped each set of takes and organized them appropriately, it’s time to set  yourself up for MultiCam editing.

To set up MultiCam editing:

When you’re setting up your multi-cam environment, you need to decide how you want to cut in your audio.  Sometimes, you want the audio of each clip to be edited with the video on every cut.  Other times, you want one camera’s audio to act as the audio for all camera angles.  Avid Media Composer lets you do either of these methods.

By default, when you cut between one camera angle and another, the audio does not switch.  (You can switch it later, but it doesn’t change on the fly.)

The Audio Follow Video option allows you to switch both the audio and video for each camera angle.  This overrides the Timeline track selectors and switches audio in track A1 only.

Ok, you’re all set up for multi-camera editing.  Now comes the fun part!  Check out Part 2 of this tutorial series to learn how to edit multi-cam.