Using Dropbox to Sync and Back up Editing Projects

Use Dropbox to sync and back up project files between multiple computers and multiple collaborators in both Avid Media Composer and Final Cut Pro 7!

Dropbox is an exceptionally useful application that allows you to store files within a designated folder on your computer—and with every Save, it instantly and safely backs up your files to the Dropbox servers, and also syncs your updated files to all of your other Dropbox folders located on other computers and mobile devices.  Additionally, you can share folders within your Dropbox with any number of collaborators, so every time you make a change, everyone gets the update simultaneously.  (Green checkmarks conveniently appear on your files to let you know that they’re synced and up to date.)  Dropbox is the way to share and back up your files.

Check out the Dropbox tour here.

So how can you use Dropbox for editing projects?

With both Avid Media Composer and Final Cut Pro 7 (and prior), you can store your Avid project folder or Final Cut Pro project file in any location you want.  So, why not keep it within a folder in your Dropbox?  As long as each person collaborating on the project has the same local media files (and each person’s media drive(s) are structured/named exactly the same) the shared Dropbox project will appropriately locate each person’s associated local media.

What does this mean?  Well—you can duplicate media to a separate hard drive, mail the drive across the country to your co-editor, and set up a project within the Dropbox—and go to it, with perfect synchronization and safe back-ups every step of the way.  The only thing you need to ensure is that you both aren’t working within the same project at the same time, because doing so may cause conflicts and corruption.

However, there is a way around this.  If you want multiple people to work on the same show, you may just want to organize your edit into separate sections (each section with its own designated “project”), so there won’t be any conflict with simultaneous editing.  This type of workflow just requires some added organization and scheduling.

Here’s a list of reasons why Dropbox is a great place to store your project files: 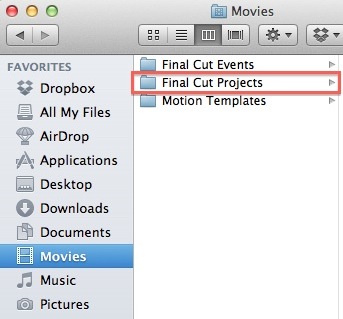 For this reason, it seems that Final Cut Pro X is not a good candidate for Dropbox storage, since you can’t easily move the location of your project files.

How are you using Dropbox (or other cloud applications) in your editing workflow?  We’d love to hear about it—tell us in the Comments!