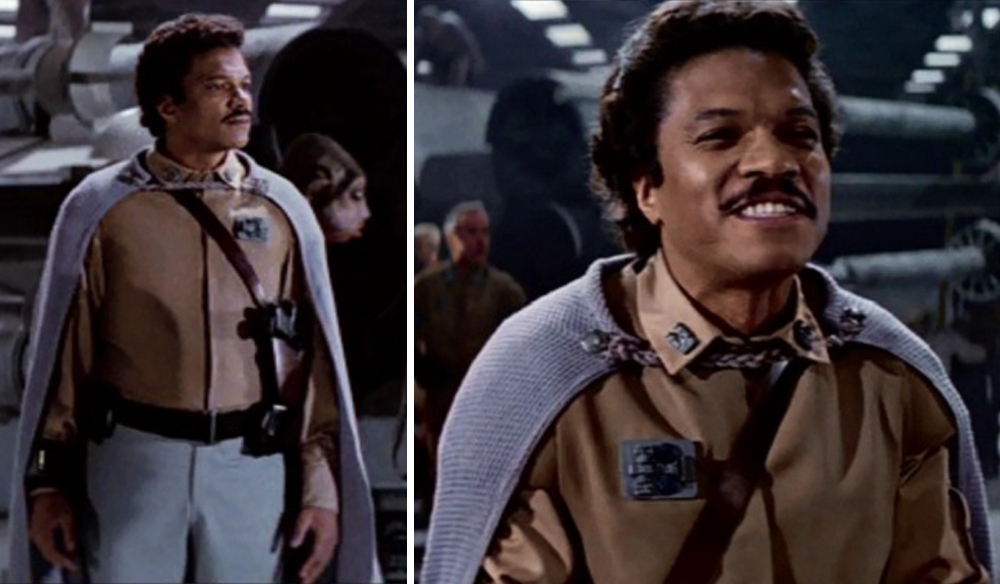 Continuity errors can pull an audience out of the world you’ve spent so much time and effort creating. Here are a few common continuity goofs and gaffes that you can easily avoid.

Top image: The Empire Strikes Back via 20th Century Fox

A few months back on a frosty Welsh morning, I stood in the middle of a meadow watching a film crew capture footage of dairy cows at first light. Somehow I ended up as script supervisor on a local-council-funded short film about the economic plight of dairy farmers in a tumultuous milk market.

I wasn’t too sure how I ended up in this position (as I usually work with lights), but it was a quick and simple job — and, most importantly, I learned a lot about continuity thanks to an actual script supervisor who was now directing. If you’re not too sure on what a script supervisor does, there’s a very simple overview of the job in this PremiumBeat article. One of the most important aspects, which is what will be covered here today, is continuity. Before we continue, here’s a fun video from WatchMojo that covers a few Hollywood continuity gaffes.

I think it’s a safe assumption to say that a lot of the online filmmaking community is made up of those interested in the visual/camera-operating side of the game. There are hundreds of websites and YouTube channels dedicated to that craft. As such, there are some things which will likely go amiss when you are solely focused on the visual aesthetics of a film.

Everyone will likely know of the usual suspects of continuity: Cigarette length, which way the hair is brushed, the amount of wine in a glass, what hand the character used to make a gesture — the list goes on. Other than the preliminary duties of a script supervisor, it was interesting to note how many external factors play into continuity, many of which will go completely over your head when you’re trying to focus on getting your talent into focus. It’s common for everyone to assume the role of continuity manager on a low-budget short, so here are a few factors to look out for next time you’re working on that passion project.

The least expensive type of short film is one that will be set in a singular location. In a house, a barn, a forest. They’re nice and easy, and they can usually be shot within a single day (given the length). If it’s a horror film you’re creating, I’m sure one of the first elements written into the script is for there to be a storm. The short film embedded above (by Alexis Wajsbrot) is an excellent example of a horror short set in a single location. It includes a man in a giant bunny suit, and of course there’s the storm.

You could have a rain machine for exterior shots and the inclusion of rain and thunder SFX to help sell the effect for interior shots. However, one thing that can often go amiss (and it does at 8:03 in the short film example above), is the addition of rain on windows and doors. When time is ticking, it’s a very simple element to miss. If windows are in the composition, remember to sprinkle them with water if there’s rain involved. 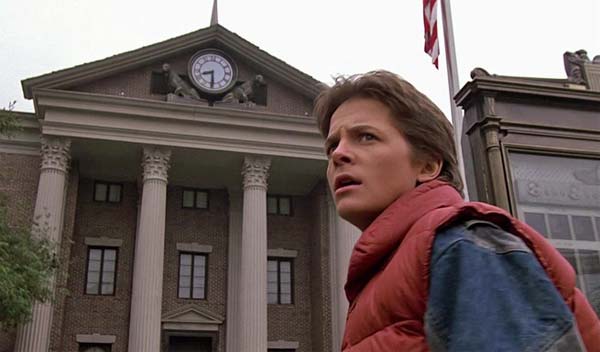 Image: Back to the Future via Amblin

It’s not always practical to shoot a night scene during the actual hours of night. Therefore, to simulate the appearance of the night, it’s common to block out the windows and light the set as if it’s night — practical lamps, tungsten lighting. In this circumstance, a common continuity error involves clocks on the wall or an LED displaying a daytime hour.

In general, anything that displays the time can often cause a headache in post-production. Unless you’re shooting on a multiple camera setup and everything goes smoothly in one take, that second hand is going to move quickly throughout the scene. It’s important to notify the art department to correct this after each take. That is, if you’re lucky enough to have an art department. If it’s a low-budget short, it may very well be your job to do this.

There was once a time in history where everyone would have a different brand of phone (or at least a different model of phone) compared to someone else. In 2016, that is no longer the case. Nearly everyone has one of three types of phones — iPhone, Android, and Windows — and the majority of people are fluent with all types.

With that said, if a character needs to make a phone call (or receives a call), gone are the days when you can fake that. Everyone knows what the iPhone calling screen looks like. It’s important to make sure that someone on set is calling the characters prop phone. It’s also pretty important to hold the phone correctly, as seen in the clip above, via GoRxRaP. (Note: The video features adult language.)

It’s relatively easy to mimic the location of another place using props, specific set design, color, and SFX. I actually have a video tutorial on how to achieve this. The director of the dairy farm short told me the following tip. She said that it’s something the art department should cover, and something often overlooked on low-budget films — and that is the origin of the plants in the scene. If you’re shooting a film in Texas, but you’re making it out to be Australia, you might want to correlate what plants should be in the scene. 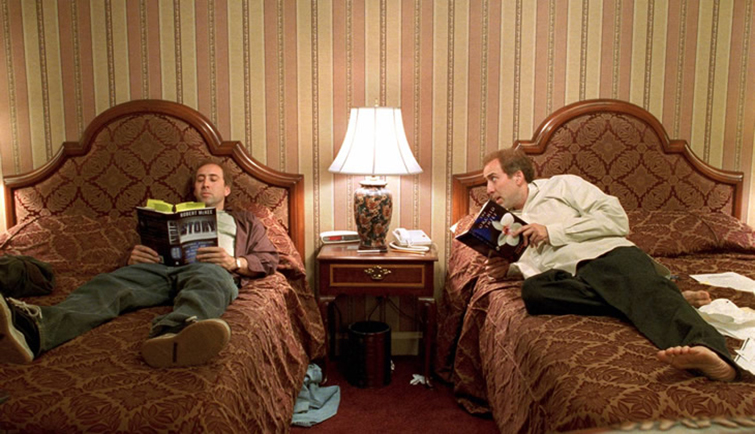 In a scene where an actor reads something from a book or points to something in a book, it’s likely that they turned to a random page, and then the crew picked up the correct insert before the scene change.

If the actor has put the open book down onto a table, it’s important to keep note of how far into the book they are. It’s very noticeable to see that a book has not been turned to the same page area as the other shot. This was the one thing I missed while working as a script supervisor. Luckily the scene was shot in 4k, and the guys in post were able to crop the book out altogether with little damage to the scene. However, not everyone can be so lucky.

6. Where Has That Character Come From?

Films are rarely shot in sequential order of the script. Due to location logistics and actor schedules, you’re more than likely going to be shooting out of order. It’s important to pay attention to where the character was in the previous scene. Was the character caught in a rain storm? If so, they should be wet when they enter the house. Was the character running through a forest? If they were, it would be likely their boots would be covered with mud. This information needs to be shared with the wardrobe department. Again, however, if this is a low-budget production, you’ll likely need to bring this information to the table before the shoot starts. 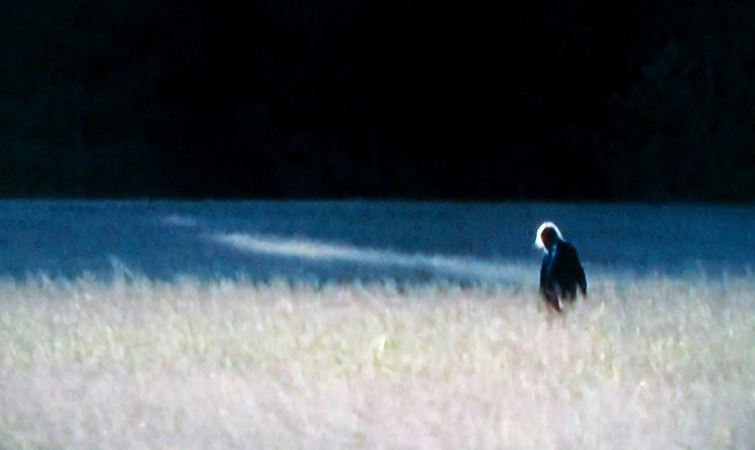 Image: The Walking Dead via AMC

This next tip should fall onto the production as a whole and not really the script supervisor, but as I’m currently shooting a film set in an apocalyptic future, it’s something I’ve been consciously aware of while looking for locations and makes for a great tip. Plus, if you watch The Walking Dead, you’ve more than likely seen the internet jokes about having cut grass in a zombie apocalypse.

Everyone loves an apocalyptic story, whether it be zombies, manmade catastrophe, or nature. A common motif of apocalyptic films is that nature reclaims its territory. Therefore, if your film is set five years in the future where life as we know it has ceased to exist, it would be wise to look for a location that has not got neat trimmed grass.

Bonus continuity tip: If your scene takes place in winter, but is being filmed in the summer, note this information for the editor. With the power and virtue of Adobe After Effects, they can insert digital condensation of exhaled breath.

Do you have any continuity tips that fall outside of the obvious? Let us know what has previously caught you out.