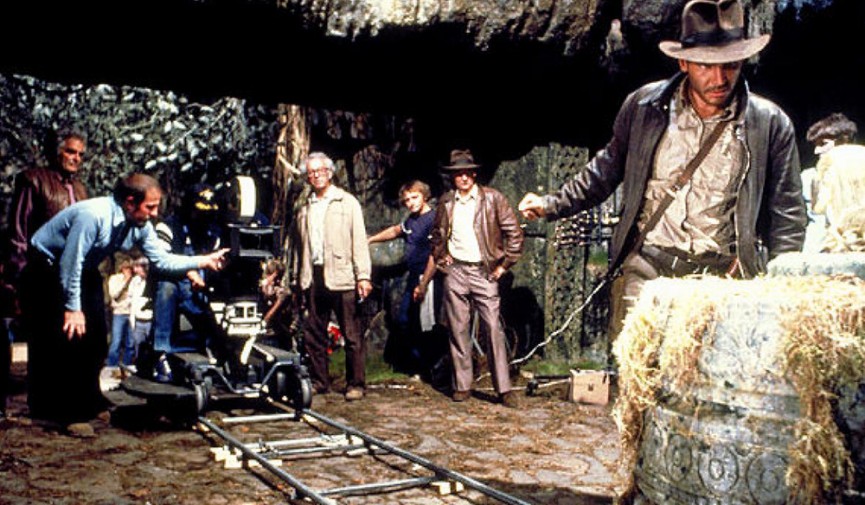 Deconstructing the Scene: Raiders of the Lost Ark

Let’s take a detailed behind-the-scenes look at how Steven Spielberg and company crafted one of the most iconic sequences in film history: The golden idol scene from Raiders of the Lost Ark.

Behind-the-scenes peeks are a perfect way to understand everything that goes into making movie magic. Let’s look at the iconic opening sequence of Raiders of the Lost Ark, from previsualization to post-production.

For reference, watch the scene one more time. The video below picks up just after the opening credits, as Indy and Satipo enter the temple and find themselves in the chamber of the golden idol.

George Lucas and Steven Spielberg developed the base concept for Raiders of the Lost Ark back in 1977, just as Star Wars was being released worldwide. It wasn’t long before Lawrence Kasdan was brought on to write several drafts of the script. The entire film hinged on setting the stage for the character and the narrative in the opening sequence.

As for the character of Dr. Henry Jones Jr., Spielberg and company looked to Charlton Heston and his character from The Secret of the Incas. Then for the actual opening sequence itself, Spielberg remembered the seventh issue of the classic Uncle Scrooge Comic, “The Seven Cities of Cibola,” which gave him the inspiration to develop the temple sequence. 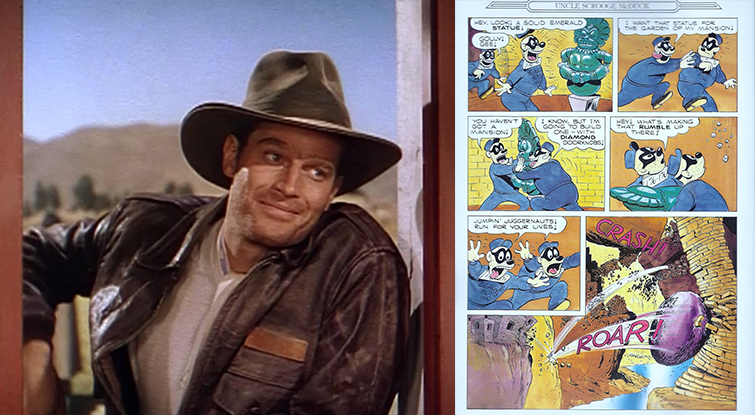 Images via Paramount and Marvel

Once the final script was developed, Lucas and Spielberg shopped the film to the studios, which proved difficult given the budget needed for the film. Paramount finally took a chance on the film, though budget concerns were expressed. Lucas and Spielberg knew they were going to have to stay on task and on budget — something Spielberg had not done in his previous three films.

In order for Spielberg to stay on task and on budget, he had his artists craft storyboards for Raiders of the Lost Ark. These storyboards included the iconic temple sequence with the golden idol and out-of-control boulder. 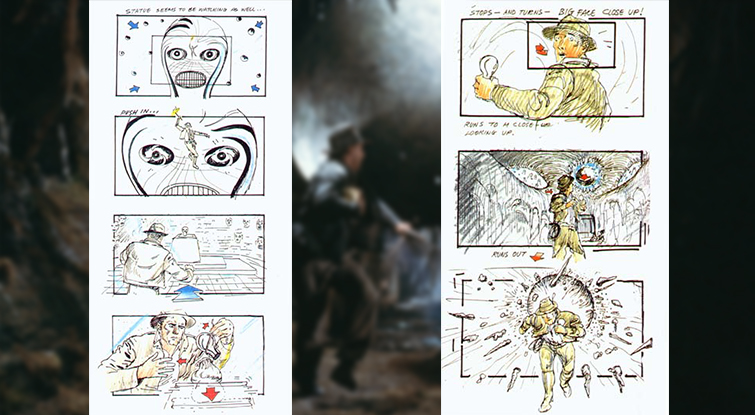 Storyboarding isn’t for everyone — some directors like to use only a shot list — however storyboarding can be extremely helpful, as we’ve covered before here on PremiumBeat. Spielberg developed his traditional stick figures and then gave those drawings to his artists to convert into the final storyboards. These storyboards, as seen above, allowed the crew to see the director’s vision before a camera ever even rolled. 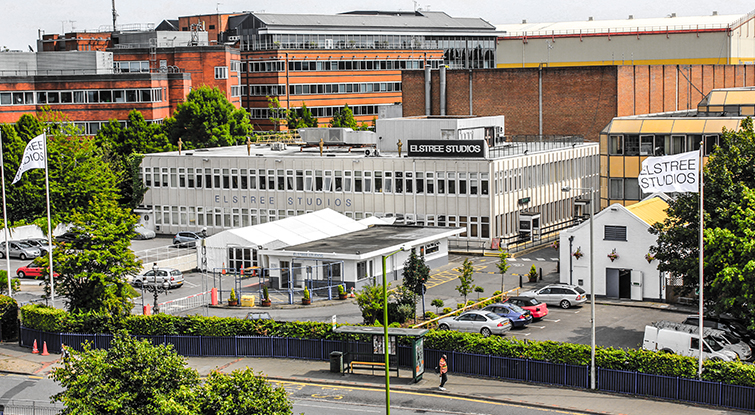 Now that everything was written out and storyboarded, the director and crew turned to production. The majority of the opening sequence was shot on set at Elstree Studios in the United Kingdom. However, exterior shots for this sequence were completed at Kauai island in Hawaii, the same location Spielberg would use years later to film Jurassic Park.

Set design is crucial to the success of a film, as quality set design will allow the audience to become lost in the world of the film. For the opening sequence of Raiders of the Lost Ark, Spielberg and company knew that converting the Elstree Studios soundstage into a Peruvian temple was going to be a tough task — but if done correctly, it would transport the audience to another place and time. 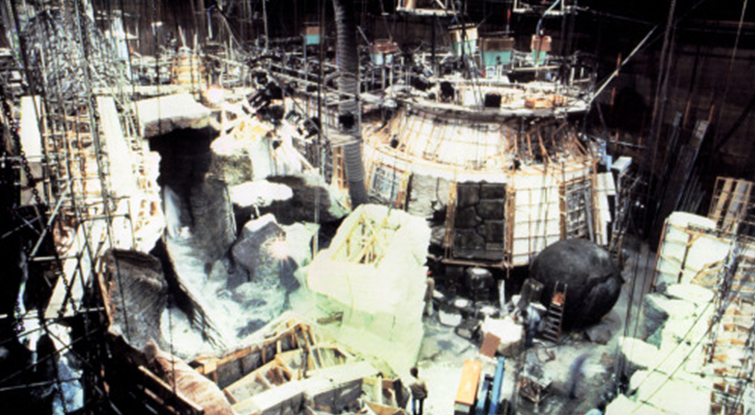 In the image above, you can see the exterior shells of the set that make up the individual areas of the temple. The key for production designer Norman Reynolds was to make sure that each of the sets looked authentic while giving Spielberg and cinematographer Douglas Slocombe the freedom to frame and capture the images they desired.

Spielberg wanted to utilize practical effects as much as possible for the project, as this would give the film a very classic serial adventure type of feel. The VFX team from ILM worked closely with the director and set designer Norman Reynolds to ensure that every element on set felt real and authentic. 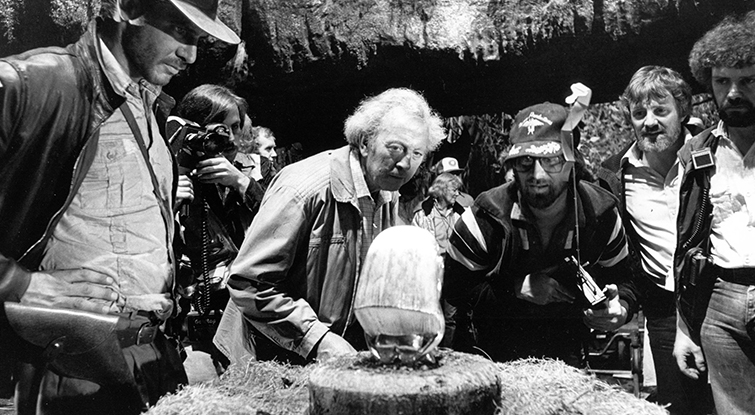 Just like set design, visual effects, no matter if digital or practical, have to fit within the existing mise-en-scène. Effects must not stand out — rather, they must blend seamlessly into the set design. 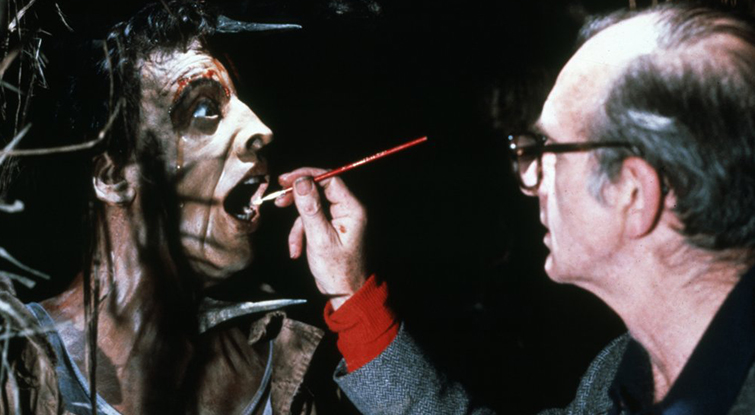 Luckily for Spielberg, he had an amazing group of VFX artists who had recently wrapped up duties on another little project called Star Wars. While there aren’t a wide range of special effects in the opening sequence, it does have its fair share: the prosthetic Satipo, the small arrows in the idol chamber, the fiberglass boulder (that weighed around 800 lbs), and even the Golden Idol with mechanical eyes.

Thanks to storyboards, Spielberg and cinematographer Douglas Slocombe had the entire film already mapped out, which allowed them to begin shooting quickly, instead of searching for the shot. 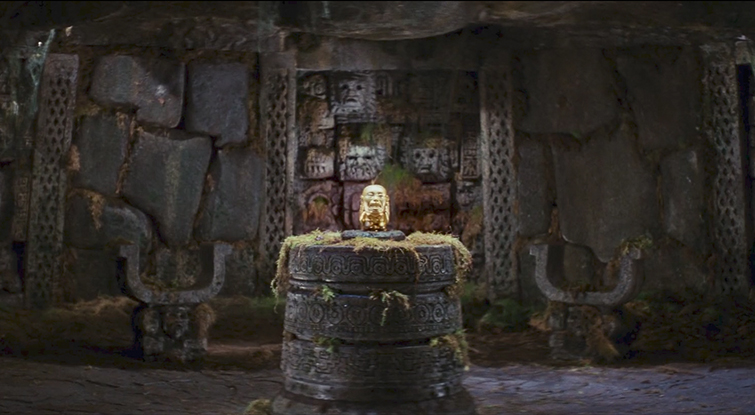 Even though Spielberg and his artists crafted the storyboards and notated where movement was needed, Slocombe added his own visual flair to the film as well. Throughout this sequence, Slocombe utilized longer takes, some of which dolly in or out. These are utilized to convey a sense of tension, or in the case of Sapito, a sense of relief.

This visual construction is in stark contrast to the twelve quick cuts that Slocombe used moments earlier to introduce Indy to the audience, as well as the composition of the images to come. 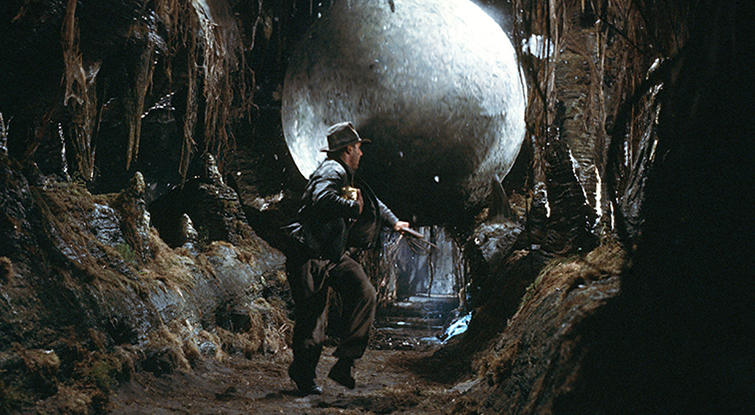 When Indy finally makes his way to the idol and swaps it out for the bag of sand, Spielberg and Slocombe change the pace and framing of the film. While there’s one dolly shot as Indy runs through the chamber, a majority of the shots are locked down on sticks and are short in duration. This escalates the pacing of the film to coincide with the frantic action. However, it still takes an editor to put this all together.

Michael Kahn is an absolute genius when it comes to editing. For Raiders of the Lost Ark, he utilized Spielberg’s storyboards and Slocombe’s perfectly paced visuals to craft an amazing story. However, it’s more than just trimming and pasting into place. 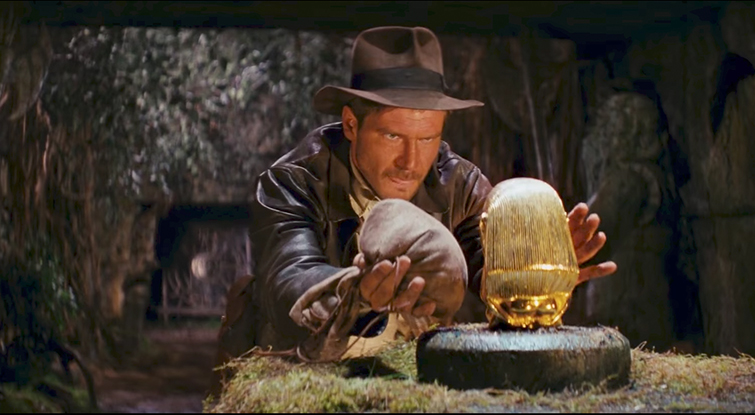 Kahn utilized the all important technique known as the J-cut, plus the occasional L-cut in some instances. In the image above, Indy is about to exchange the bag of sand for the idol. As the idol sinks and triggers the booby-traps, sound effects created by Ben Burtt hint at something dangerous — then there’s jump cut to a wide shot as Indy realizes the walls are crumbling around him. This ends the slower pace of the scene’s beginning and unleashes a new frantic pace for the remainder of the sequence. 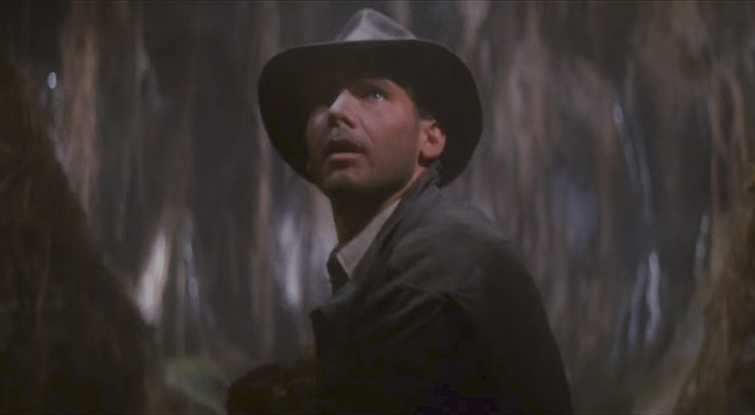 Kahn didn’t just stop with the chamber destruction either. He utilized another J-cut as Indy hears something happening behind him. Kahn jump cuts to a wide shot, revealing a boulder rolling toward Indy. So, even though everything was “laid out” for him in the storyboards and in-camera cuts, Kahn still had to go through the edit and make sure everything made sense and that specific techniques were used to aid the audience experience.

Just as cinematographer Douglas Slocombe and editor Michael Kahn utilized the pacing of the film to emotionally effect the audience, conductor John Williams had to do the same thing with the film score. 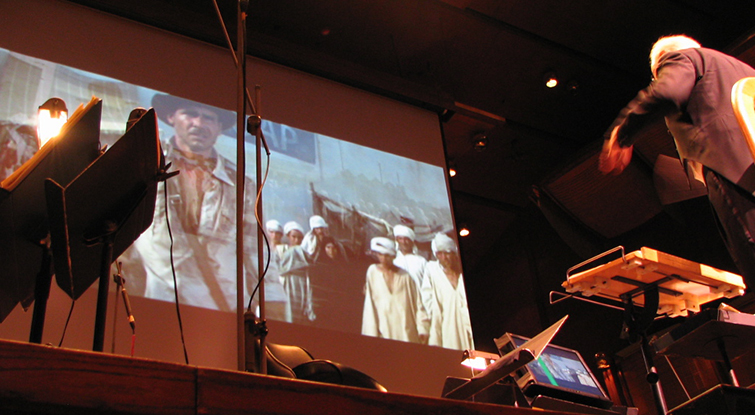 Knowing where and how to use the right music is crucial. Williams starts the sequence with a slow, tension-filled score. When the idol drops, the music changes and the brass section rises as the score picks up pace.

So, as apparent above, there are several components that go into crafting a scene. The key to pulling off these scenes is planning, planning, and more planning. Once you have your vision, put it down in a tangible medium. Once you do this, then you can really begin to build your scene before you ever even roll on a single camera. This will aid you greatly during principle photography and post-production alike.

What other iconic movie scenes would you like to see from behind the scenes? Let us know in the comments below!