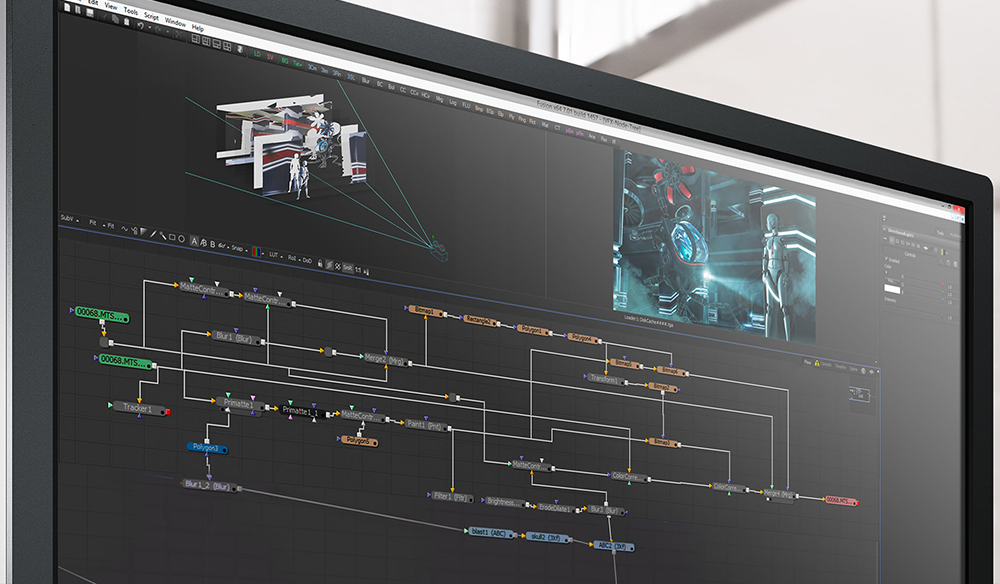 Blackmagic recently acquired professional VFX software Eyeon Fusion and is now giving it away for FREE.

In  If you follow the VFX industry or industry related software than you are probably already familiar with the compositing/VFX/graphics program Eyeon Fusion. Eyeon Fusion is an incredibly powerful program with a ton of industry-standard effects and node based workflow. Eyeon Fusion was purchased by Blackmagic Design earlier in 2014. The acquisition came as a surprise to many in the VFX community. Consumers were left in the dark about the future of Eyeon Fusion…until now.

Today Blackmagic announced that the latest version of Eyeon Fusion 7 is available for download on Blackmagic’s website for free. Yes you read that right. This announcement has huge implications for the VFX and motion graphics community, as previous versions of Fusion were $2,500 a license.

The new version of Eyeon Fusion 7 will come in two varieties, Free and Studio ($995).  The difference between the versions is that Studio has been created and optimized for, you guessed it, studios by allowing such functionality as network rendering, project management tools, and third party OpenFX plugins.

This is definitely an industry game-changer. The only downside to this announcement is that currently Fusion 7 is only available for Windows based machines, so if you use a Mac you are going to miss out on the fun (for now).

Eyeon Fusion has been used on dozens of Hollywood features including Thor, Noah, Gravity, Edge of Tomorrow, and Avatar. It is a node based application, meaning unlike After Effects or Apple Motion, it doesn’t work by compiling layers on top of one another. Instead users link assets together using nodes (see picture). This way of working can be extremely beneficial if you work with 3D objects or work in the compositing world. If you want to learn more about how node workflows compare to layer based software check out our post on ‘Nuke vs. After Effects: A Realistic Comparison‘.

There are also a lot of really good Eyeon Fusion tutorials and resources out there to help you get up-to-speed on how to integrate Eyeon Fusion into your current workflow. Including:

This announcement also comes in the wake of Blackmagic releasing DaVinci Resolve Lite, a video editing and motion graphics application that’s also free to the public. We’ll be interested to see if this now ushers in a new wave of competition between software developers and hardware developers.

If you know of any other awesome training resources for learning about Eyeon Fusion we’d love to hear about them in the comments below.