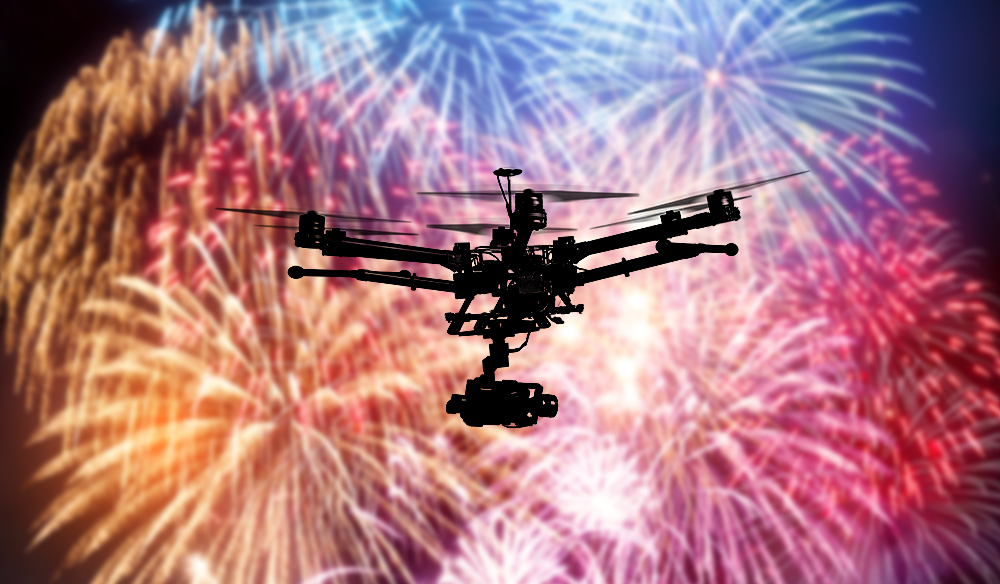 Can You Legally Fly A Drone Through A Fireworks Show?

Flying a drone through a fireworks show is certainly impressive. But is it legal?

Video footage of a drone flying through a fireworks show (like the clips below) is awe-inspiring…but like many dangerous things, it’s also illegal.

Can I Use My Drone at a Fireworks Show?

NO! Flying a drone through a fireworks show is not only illegal, it’s a felony that is punishable by up to a $40,000 fine and a minimum of 5 years in prison with a maximum of 10 years. Still think that footage is worth it? This is because local law enforcement will establish a no-fly zone around a public fireworks show area. Once they do this, you might as well be flying your drone at an airport in the eyes of the law.

There are also other dangers associated with shooting a fireworks show with a drone. For example, if a firework were to hit your drone and bounce towards a crowd, bad things can happen. There’s also the whole ‘getting your drone destroyed by an exploding firework’ thing… that’s no fun.

You can shoot a fireworks show from a safe distance away as long as you are not in an active no-fly zone. Just make sure to contact local law offices to see if there are any temporary no-fly zones you need to know about. Also, be on the lookout for any fireworks helicopter tours that may be going on in your area.

Can I Fly A Drone Through Fireworks I Shoot Off?

This question is a legal grey area and you should look at both your state and local laws regarding this issue. Not just the FAA, but also the local fire department who have authority when it comes to fireworks. If you want more information regarding this subject, I highly recommend checking out Gregory McNeal’s article “Flying A Drone Through Fireworks May Land You In Prison” on Forbes.

I personally recommend not risking it. You know there are going to be some dummies out there who will shoot drone footage through fireworks shows. Just watch their videos when they upload them on the 5th of July. Oh, and be sure to leave some comments so they’ll have something to read on July 6th after posting bail.

In the meantime, here are 5 videos showcasing drones flying through and near fireworks show. Again, this is dangerous and illegal, but the footage is undeniably stunning.

This is a great example of footage shot from a safe distance. I’m not sure if you can legally fly a drone in downtown Detroit, but the video is nonetheless awesome.

Want some more drone inspiration? Check out a few of the following links:

Have you ever shot drone footage through a fireworks show? Should it be illegal? Share your thoughts in the comments below.