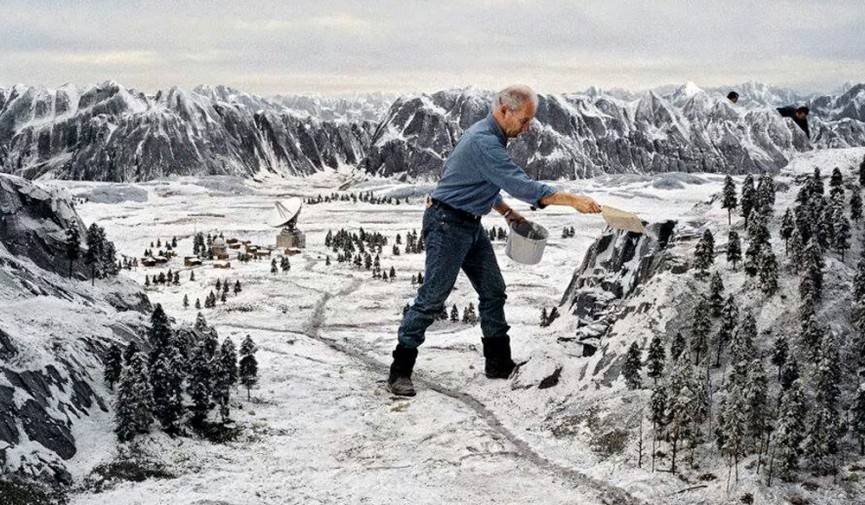 Illustrating a sense of scale is something that filmmakers still often have difficulty with today. These resources and cinematography tips should give you a better understanding of how to magnify your subjects.

In this day and age, there are numerous ways, both practical and digital, to exaggerate scale and fool the audience into seeing something as larger than life. Whether you’re simply emphasizing the size of something truly massive, or making something tiny appear large, these resources and cinematography tips can give filmmakers a better understanding of how to illustrate a sense of scale.

The simplest thing you can do to make your subject feel large is to shoot it from a low angle, pointed somewhat upwards at the subject. By providing the illusion of looking up at something, low-angle shots convey a sense of power and greatness in a scene, which is why you’ll notice that characters who “hold the power” of the moment are generally shot from a lower angle than others. In this same vein, point of view shots from the perspective of someone can give insight into how characters are experiencing the situation.

The introductory shot to Star Wars is an iconic example of this technique, with the clearly enormous Star Destroyer framed above not only the smaller ship, its prey, but also above the nearby planets, implying true grandness. It also takes up more of the frame than anything else, signifying the scale and reach of the Empire itself. As you can see, hyperbolizing the scale of specific objects can often hint to larger ideas within a story.

By deliberately keeping some of the subject out of the frame, you can give the impression that it is simply too big to be seen all at once. This also feels a bit spatially intrusive, and therefore intimidating, by occupying most of your vision to the point of breaking its borders.

Unlike static objects and fictional creatures, real humans and animals generally cannot be replaced with miniatures. In these situations, you’ll probably have to rely on either green screens and CGI, or some old fashioned in-camera magic. Forced perspective, or the use of depth to create optical illusions of scale, is an older technique that, while time-consuming and often complex, can produce some truly flawless results. Forced perspective received widespread recognition with the release of The Lord of the Rings trilogy, which used it to an unforeseen degree.

By creating precise custom tracks for their props and cameras, they were able to perform camera movements while maintaining the illusion of a small human, all without the assistance of computers. This was truly groundbreaking, and like most well-done practical effects, it still looks great. Even if these kind of complicated set pieces are beyond you, forced perspective is still something you can use to your advantage without fancy camera movement. 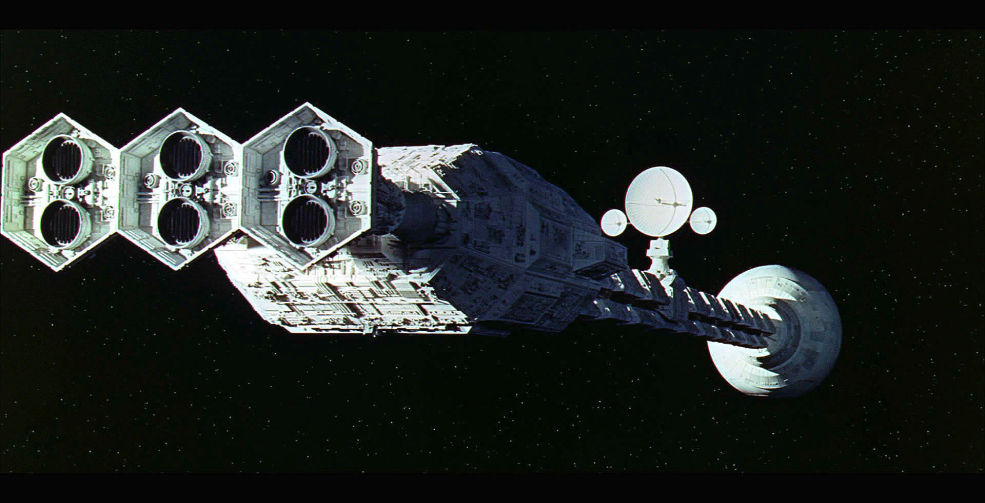 Prior to the domination of CGI, most filmmakers turned to miniature models when depicting something that could not be created in full scale. For the most part, the use of miniatures has held up better over the years than the use of CGI, since it is still uses a real object. You’d be surprised at how many films, even more recent ones, have featured miniatures.

One of the most notable of these is the sci-fi Stanley Kubrick classic, 2001: A Space Odyssey, which paved the way for later films set in space, such as Alien and, of course, Star Wars.

Even now, films such as the 2009 sci-fi drama Moon employ similar miniatures in their sets, as seen below. Miniatures are, for the most part, more affordable than CGI, and will stand the test of time better to boot. 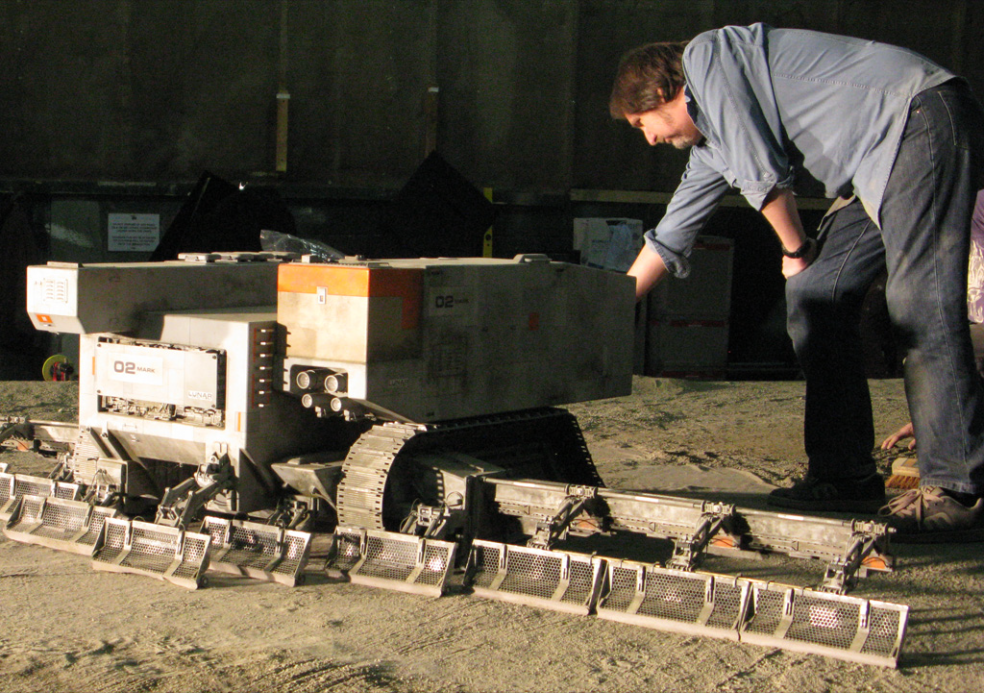 Image from the Prop Gallery

Thanks in part to the use of greebles (adding smaller parts to a an object to make it appear larger), the intricately detailed miniatures of the film are still stunning by today’s standards. For instance, the surface of the Death Star in Star Wars was covered in greebles, as they give a reference point for scale, unlike a smooth, bland surface. 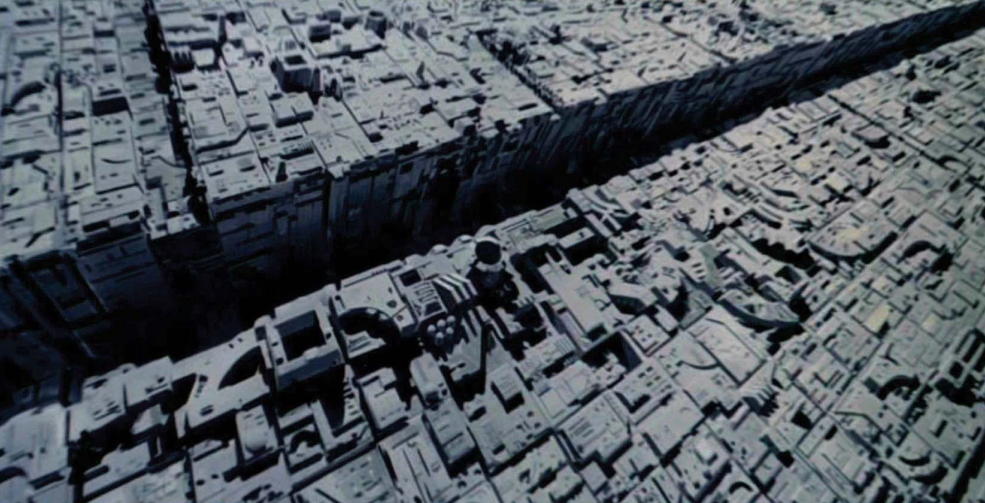 You may not have realized it, but Christopher Nolan’s The Dark Knight features a thrilling sequence shot with miniatures. Remember that awesome shot of the Tumbler crashing into a dump truck head on? That was actually shot at 1/3 scale, meaning all props were a third of their real-life counterpart. Nolan is one of the last modern filmmakers fighting to preserve practical effects, and he makes great use of them through miniatures in most of his movies.

As you can see, this was still large enough to feature enough details to be nearly indistinguishable from the full-sized footage. Additionally, the physics of the objects were still realistic since they still held significant mass — which we’ll go into next.

Modifying the movement of something to make it appear larger is one of the trickier aspects of exaggerating size, though Hollywood has gotten quite good at it over the decades. Since the depiction of early giant monsters such as King Kong and Godzilla, artists have realized that large objects tend to move more slowly, meaning that usually slowing down footage will at least hint at size. This technique is best applied to non-organic props that lack the subtleties of, say, an animal’s movements.

CGI opens up possibilities for more precise movement when needed, but in most cases,the limitations of slower playback speed aren’t too apparent. Minor flaws in physics are not as noticeable as a poorly textured or lit CGI element. The above funny scene from Ghostbusters features a building-sized monster version of the Stay Puft Marshmallow Man, and manages to make it slightly less unbelievable by slowing down its motion.

The 2013 action blockbuster from Guillermo Del Toro, Pacific Rim, displayed some awe-inspiring creatures of epic proportions, with a true sense of impact as they slowly lumber, even while fighting. While a normal human punch might take a half second, the giant robot punches of Pacific Rim take one or two seconds, conveying the idea that a lot of weight is being moved.

This film was extremely CGI-heavy, but it took full advantage of what CGI has to offer by focusing on accurate physics simulations.

Another great way to exaggerate scale is by incorporating the effects of the environment into your scene. This is best applied when showing something large from far away. For instance, you might obscure it in comparison to foreground objects with some fog, if the setting calls for it. In a hot setting, you could obscure it with some heat waves. Phenomena like this that indicate distance are a very natural way to show how big an object appears even from afar. We’ll use another Star Destroyer as an example, with this gorgeous shot (above) from the upcoming Star Wars Episode VII: The Force Awakens.

Note that foreground objects are saturated and clear, whereas the distant Star Destroyer features muted colors, low contrast, and a little blur. Additionally, like the earlier Star Destroyer shot, this one is pushed slightly out of frame. 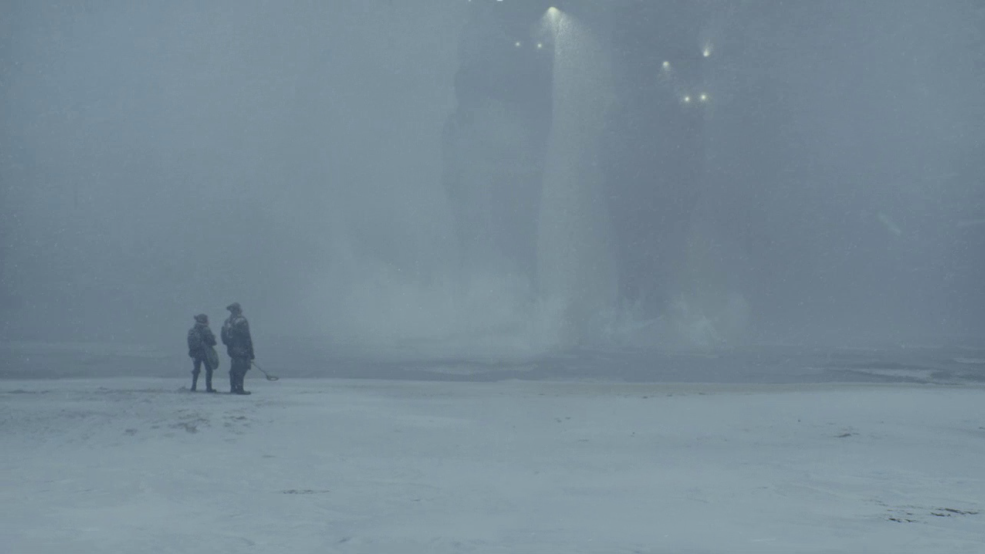 Terms of scale like “big” and “small” are almost entirely relative, defined mostly by the standards of a certain situation. Something is only “large” when compared to objects smaller than it. When compared to even larger objects, a previously “large” object suddenly becomes “small.” For this reason, you should always have at least one shot that shows your “large” object near something that most people are familiar with.

Humans are the most common example of this, since they provide the most quickly identifiable point of reference. However, other every day things like cars, buildings, and trees can all provide this same effect. The reveal of Godzilla in the 2014 Godzilla remake used this trick to similar effect.

While the human eye is constantly improving at detecting what is and isn’t real, the best techniques are often among the oldest. However, it no longer takes a titanic budget to depict something titanic — just some planning and creativity. What films do you think did a great job illustrating scale? Let us know in the comments below!