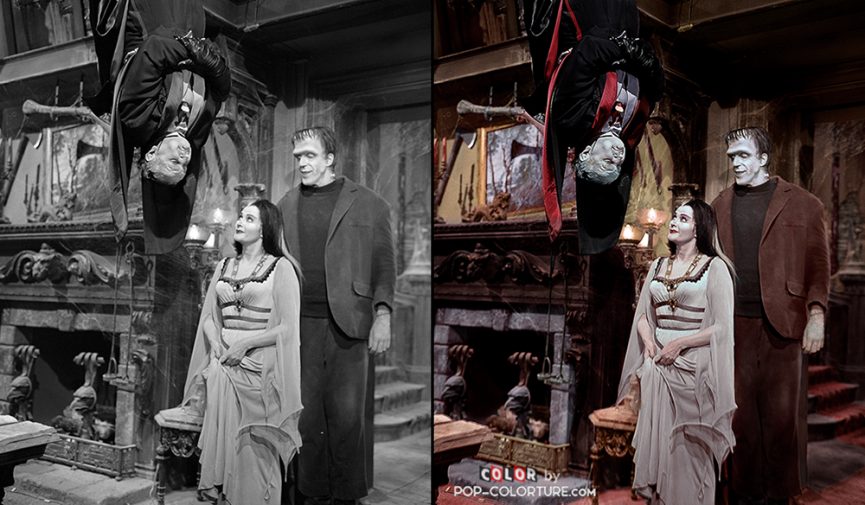 The Magic Behind Colorizing Old Black and White Footage

Get a glimpse behind the curtain and learn about the magic art of colorizing old B&W footage with the digital color artist at POP COLORTURE.

The early days of both television and film were only black and white. Industry professionals recorded and broadcast information in monochrome, which carried only variations in the tones and contrasts between light and dark areas.

As advances in technology made color a necessity, black and white television and films became relics of the past. Now, in the digital age, it’s easy to take how far we have come for granted.

Yet, there remain artifacts of a simpler time, a time of grayscale and celluloid, which we encounter in classic cinema and on late-night TV. For those nostalgic to bring those memories back to life, the art of colorization has become their greatest hope — championed by an up-and-coming wave of digital artists.

Meet Zach Smothers — or more importantly, meet his work at POP COLORTURE. Smothers, an avid fan of retro pop culture, is a leader of the digital colorization movement. He pushes for improvements in the quality and efficiency of colorization through new and improved digital techniques and innovation.

“Colorization in the past was not good. In fact, it was pretty terrible and even today, colorizations are typically flat with little shading and color variation” (interview with Universal Monsters Universe).

As you can see in the colorized intro to The Addams Family above, Smothers’s digital colorization has not only brought out the black-and-white footage’s colors, it has also given the footage dynamic contrast that seems to pop back to life.

If you’re not a fan of a magician revealing his tricks, it’d be best to not watch the video above. If you do, you’ll see that the magic is, in actuality, a painstaking frame-by-frame process that pulls colors out one by one — by hand.

My process is constantly evolving with the goal to increase speed and improve quality. Before The Munsters opening, I had colorized images and I knew there were more efficient methods for video, but I figured doing at least one frame-by-frame project would be good for me.  Now for efficiency, I use motion tracking and rotoscoping to animate color on top of the black and white footage. I’ve timed projects and using motion tracking, I work almost 10 times faster than painting frame by frame (UMU).

Smothers’s workflow includes Adobe Photoshop, After Effects and Mocha Pro. If you’re interested in his training and technique, he details how he developed his process (which, for the 44-second intro for The Munsters, took 1,317 frames!) in his blog post here.

Image by Richard Fish from the set of The Addams Family compared to how it appeared on TV (via fastcodesign).

Smothers decided to put in this dutiful work out of love and, in a way, convenience. The Munsters, Smothers argues, was not truly intended to be black-and-white but was shot that way due to budgetary concerns.

In a 2002 interview, Munsters makeup creator Karl Silvera explained, “It was $10,000 more to do [the show] in color and neither CBS or Universal were willing to pick up that extra $10,000 per segment. That’s why it was shot in black and white.” via The AV Club.

As such, only the pilot episode and a later film version were shot in color, which gives colorization artists like Smothers a good point of reference. (You can read about the pilot in more depth here.)

Also, as noted in The Addams Family set photo above, colored set photos for many vintage shows and films can also be useful resources — which is interesting in itself as black-and-white sets often featured more vibrant sets and props to highlight the distinction between dark and light shading.

If you’re interested in trying your hand at digital colorization, it’s important to understand the basics of how color works and the many aspects of digital color correction and grading. If you take a photo-by-photo approach, using programs like Photoshop and learning to create a multi-platform workflow with After Effects and color grading speciality programs like DaVinci Resolve would be ideal.

Here are some helpful tutorials and articles to get you started.

What do you think about the colorization of black and white footage? Let us know in the comments.