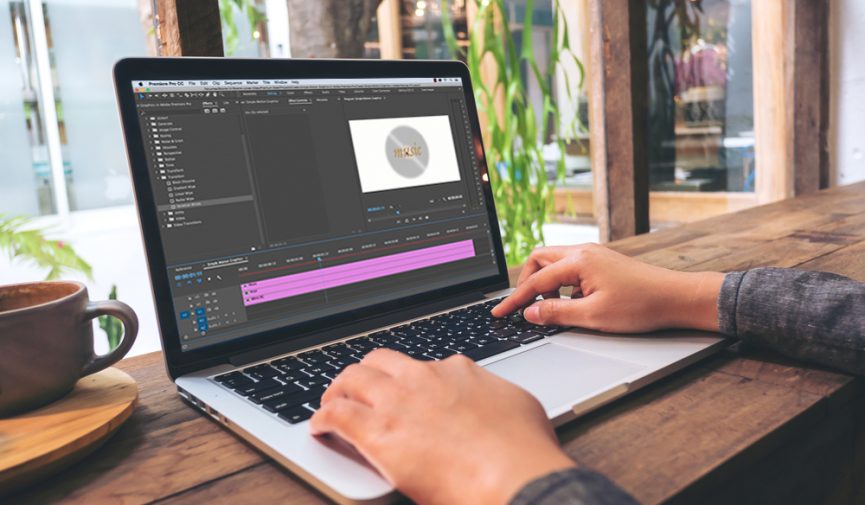 Premiere Pro is more than just an editing tool. Learn how to create simple motion graphics in this step-by-step tutorial.

Few people are aware of Adobe Premiere Pro’s motion graphics capabilities. Adobe software applications are so tightly integrated that most users consider it a breeze to jump from Premiere into After Effects and to create graphic elements. However, if you aren’t familiar with the After Effects interface, or if you just want to stay in one software application, learning how to create motion graphics in Premiere will make your life much easier. In this tutorial, I’m going to show you a few tips and tricks that will get you started working with simple motion graphics in Adobe Premiere Pro.

Premiere’s Title Designer panel allows you to create, stylize, and format text. Create basic shapes with the ellipse, wedge, arc, line, and rectangle tools, or create custom designs with the pen tool. For this project, I want to create a vinyl record as my main graphic element. To create the record, I will first create a small circle shape with the ellipse tool. Under Title Properties, I can add several outer strokes. For my last outer stroke, I will add a sheen, adjusting the size, opacity, and angle for the desired effect. I will then create an entirely separate Title layer for the text, which will allow me more flexibility later during animation. Now I can bring both the text and record into the timeline as separate layers.

Now that I have my graphics ready on the timeline, I want to bring them to life using video effects. First, I will add a Blur effect to the record layer. Adding blur and lowering the Opacity of the record layer will make the text pop. Next, I want an interesting yet simple transition effect for both the text and the record. You’ll find plenty of tools to work with in the Video Effects panel, including stock transition effects. I’ve added a Radial Wipe effect to make the record animate in and a simple Venetian Blinds transition for my text. I can properly time the transition of both layers using keyframes in the Effect Controls panel.

I like motion graphics that are simple and subtle. For the finishing touches, I’ve added a slight scaling animation to both layers. In the Effect Controls panel, I simply added scale keyframes at the In and Out points and added a small change. The text scales up slowly, while the record slowly scales down, giving a slight movement to the whole piece. I can even add a rotation animation to the record for extra effect. And that’s it! Our animation is complete.

When it comes to creating and designing motion graphics in Premiere Pro, the sky’s the limit.

Do you know other motion graphics tips for Premiere Pro? Let us know in the comments.