Unlock the Power of 3D in After Effects with Helium

Check out the new Helium plugin if you’re looking to add some extra depth to your next After Effects animation.

Entering the Wonderful World of 3D

While Adobe After Effects is my tool of choice as a freelance motion designer, I’ve wanted to add a proper 3D program to my tool belt. I specialize in cartographic animations, and lately I’ve been receiving requests to create some pretty complex 3D visualizations.

These requests include terrain, 3D paths, and detailed 3D elements such as buildings and points of interest. These are especially difficult things to create in After Effects. So, I decided to take the leap.

Late last year, I set aside two hours a day for thirty days in an attempt to learn Blender, the popular (and free) 3D application. I did so with the hopes of sparking an interest in the program. Unfortunately, my passion for Blender was never ignited over the course of this month. The main deterrent was time.

Naturally, learning a 3D program from scratch is a serious time investment. It takes a while to see even a little progress. Add juggling freelance gigs with family and personal responsibilities to that, and you quickly realize how time is a precious commodity. When dedicating several hours a day to learn something, it’s nice to see even a little return on that investment. Unfortunately, this wasn’t the case for me.

That’s why I was incredibly excited to see Helium drop onto the scene late last year.

A Tool for the 3D Enthusiast

Helium is a 3D motion design plugin. It allows users to quickly and easily create high-quality 3D animations, all without having to leave After Effects. This comment on aescripts.com from the creator sealed the deal for me:

Yep, this was certainly the case for me. The more I looked into Helium’s features, the more I was convinced that it was somehow explicitly designed for me and my cartographic endeavors. It has presets for creating 3D terrain, splines, icons, text, and even paper rollouts.

It was time to have a closer look.

Here’s how it works –

You can rename, duplicate, stack, and even pre-comp Helium effects to create some incredibly complex scenes, all within After Effects.

One thing that makes Helium so user-friendly is the vast number of included presets. After applying the effect, a preset window will automatically launch. The top section shows you quick links to the main sections of creator and modifier effects. For this example, I’ll create some animated text.

While these presets are plug-and-play, they’re very customizable. This helps you steer away from a template look.

With my extrude preset selected, Helium will automatically set up the comp with a light, camera, text layer, and null object. The specific parameters in the Effect Controls panel will depend on the type of Creator/Modifier effect selected.

The effects follow a specific render order. For example, modifier effects will be applied to all the effects placed above them in the Effect Controls panel. You can precomp other Helium layers/comps via a Helium Create effect.

Bringing a Helium project to life is quite easy and fun. You can naturally keyframe and fly the native AE camera around the comp as usual.

Many creator effects are attached to a Null object, which you can quickly access by clicking the Null button at the top of your effect. Use the Null to position or animate the objects as you desire quickly. The button is just to the right of the Environment settings button.

As with the cameras, native AE lights work as they normally would inside After Effects. But it’s quite exciting to see them illuminating 3D objects.

There’s also a setting for Environment lighting. Click on the Sun icon at the top of the Helium Effect to launch the presets window. Pull from several environment presets or point to a layer in the composition. When an environment is applied, a Null that controls its orientation is added to the scene. Control the shadows via a dropdown menu of basic controls.

The large Edit button will launch the presets window, where you can select and apply preset materials. Once a material is applied, you’ll see a new precomp in your project, which contains all of the necessary image files.

For detailed editing options, go to the Properties group of the effect and click the extract button. This will create a separate Material effect, where you can make fine-tune adjustments. Be aware that extracted materials will be applied to all of the effects it rests under. You can avoid this by switching the Material button under the Properties group. This will revert the material back to the embedded option.

Helium comes with a number of preset 3D models, but the real powerhouse feature is the ability to import OBJ files. This is as easy as applying the Model effect and then using the import button to bring the file into After Effects.

In this example, I’m going to put a 3D Eiffel Tower on a flat map.

First, I’ll create a plane primitive and then add a map as the texture layer. I’m using this beautiful map of Paris that I got from Shutterstock. To use it as a texture, I’ll drag it into the timeline, turn off the visibility, and then select it as the texture in the Plane effect. To get the right size, I’ll match the texture to the resolution of the image.

Next, I’ll add a Model effect and import my Eiffel Tower OBJ file. I’ll position my Eiffel Tower where it goes on the map and then add a spotlight to give me a nice shadow. Again, positioning the model is made simple via the Null control layer. Finally, I’ll keyframe and fly my camera around to create a subtle animation.

Once I got the hang of Helium’s workflow, I decided to see how many map animations I could knock out in just a few hours time.

First, I used the included terrain preset to recreate a terrain I previously created in Blender. You can check out how I created the terrain in Blender here in this tutorial. Helium provided incredible results, and the render took roughly fourteen minutes.

Next, I played around with the Scroll preset, and in no time, I had a very nice results. I was initially concerned that it might look too much like a template. However, simply changing the camera angle, depth of field, and lighting gave me a fresh and original look.

Helium definitely delivers in the user-friendly department. The number of animations I was able to crank out in just a few days was pretty phenomenal. I also reached a level of comfort quickly. This is obviously due to my existing experience in After Effects.

Blender introduced so many knowledge roadblocks for me, including understanding node and PBR workflows, various render engines, and all of the quirks that come with learning a new interface. This is a problem as my current After Effects clients need revisions delivered with an especially fast turnaround time. This seems nearly impossible in a noob Blender workflow. Helium solves this problem.

My main (and only) complaint with Helium was with importing OBJs. I had several issues with the textures not importing correctly or OBJs just responding slowly.

After an email to the support address, the creator responded very quickly to explain. Apparently, there are two different PBR workflows (knowledge to a 3D newbie), and Helium prefers the most common one, which is roughness/metal. Several of my OBJS were using specular/glossy, which made things difficult for me.

While the models were imported correctly, I couldn’t figure out how to properly apply the materials or if it was even possible. I’m still not sure 100% sure if this issue is partly due to my lack of 3D knowledge or if it’s a real issue with this tool to be remedied.

For me, trying to learn Blender was like diving into the deep end of a pool while not knowing how to swim. Helium is like drifting into the deep end with a set of water wings. Surprisingly, I’ve noticed that Helium is starting to spark my interest in Blender and the world of 3D animation programs again. Hopefully, it will ignite a passion that I can stick with this time.

But for the time being, I’ll be using Helium to add that extra depth to my map animations. 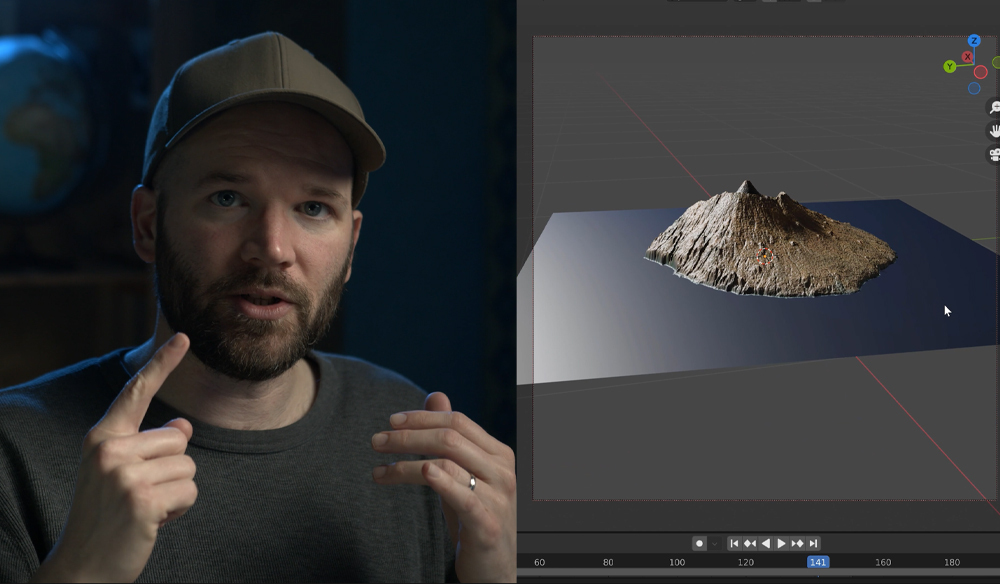