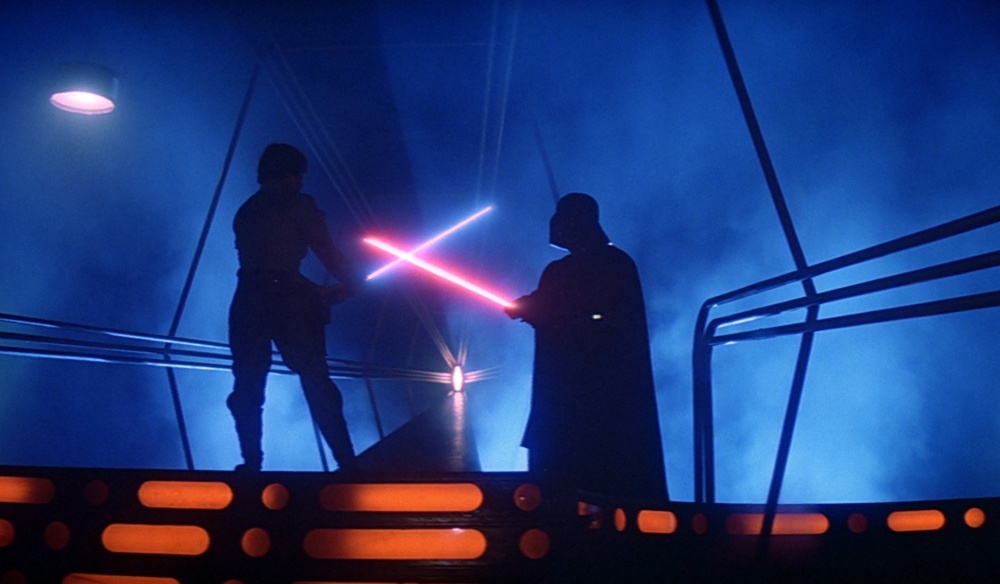 Creating the Cloud City Duel from The Empire Strikes Back

Let’s take a behind-the-scenes look at Vader and Luke’s Cloud City duel from The Empire Strikes Back.

Ask just about any filmmaker to identify their favorite Star Wars film and a majority of them will tell you The Empire Strikes Back. For many, Empire was just on another level in terms of narrative, cinematography, editing, pacing, and special effects. While many of us absolutely love A New Hope for taking us to places we had never been, Empire took us beyond that.

There are countless moments in The Empire Strikes Back we could deconstruct and study, but there’s one quotable scene that stands out from the rest: the Cloud City duel between Luke Skywalker and Darth Vader.

Pre-Production of the Scene

During the pre-production process, you always want to try and fully develop your scene ahead of time. For such a pivotal scene, concept design and storyboards were an absolute must. Producer George Lucas needed an artist who could conceptually design the scene he saw in his head, so he went back to his original legendary concept artist, Ralph McQuarrie.

I think Ralph’s contribution to the Star Wars world is incalculable, it’s him bringing the characters that I described in words to life… It’s one thing to describe things, and then it’s one thing to hold a picture up, and the pictures were so accurate to what I wanted.  – George Lucas, Star Wars Concept Artist: Tribute to a Master

Not only were the storyboards and concept designs of the scene important, but the choreography of the scene was vital as well. Having such a long duel between two characters was a logistical challenge. They had to work the sword play in through essentially four different areas, so for the actors there as a lot to learn on top of their dialogue.

Beyond the actual fight, the look and feel of the scene had to be perfect, as there was a lot of layered conflict going on in the scene. There was the obvious good versus evil — but there was also power versus weakness, control versus freedom, and order versus chaos. To portray this tangle of emotion and motivation, McQuarrie and the artists at ILM crafted a set that would stay fairly neutral, while the costumes and lightsabers would highlight the conflict.

Set Design of the Scene

Set designer Roger Christian worked diligently with Lucas, Kershner, and McQuarrie to get that look and feel that was needed for the film. As he did on A New Hope, Christian went against the grain and decided to use metal as his main material, versus the plastics featured in sci-fi films such as Star Trek and 2001: A Space Odyssey. Again, the result of this decision made the inner structure system of Cloud City seem flat and void or neutral.

All science fiction before was very plastic and stupid uniforms and Flash Gordon stuff. Nothing was new. George was going right against that. My first conversation with him was that spaceships should be things you see in garages with oil dripping and they keep repairing them to keep them going, because that’s how the world is. – Roger Christian via Esquire

There was great importance on making this final section of the scene feel isolated and dangerous. Because of the shocking revelation that Luke would receive from Vader, the set design should exist in such a way that it heightened the tension for the scene. With this in mind, Christian and set designer John Barry crafted the catwalk set on one of the sound stages at the legendary Pinewood Studios.

Behind the scenes of The Empire Strikes Back via Lucasfilm

Again, they needed the set to feel dangerous and isolated, not only for the audience, but for actor Mark Hamill as well. They achieved this by creating a massive set with a curved wall to highlight the inner structure’s depth. On the final section of the set, Hamill would find himself ten to twelve feet above the mattress-covered floor below, with a large fan blowing from this left. 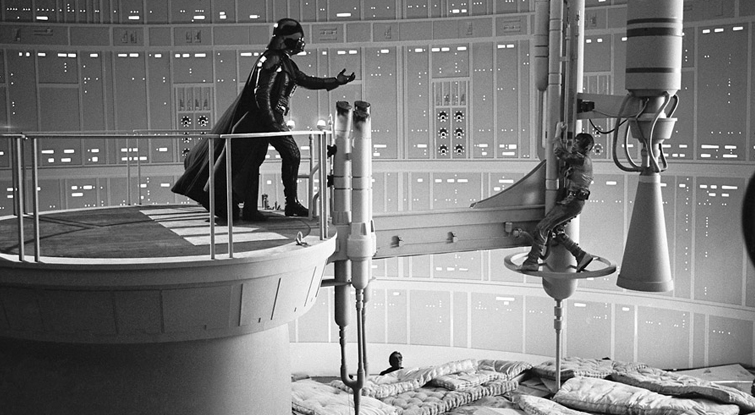 Behind the scenes of The Empire Strikes Back via Lucasfilm

This scene would have never been able to really come to life and highlight that good versus evil conflict had Christian and Barry not designed a muted and isolated set for the drama to play out.

Cinematography of the Scene

Just as with any fight sequence or great dramatic stand-off, Kershner opted to begin the sequence with an establishing shot. He effectively places Luke within a space that is vastly different to the rest of the Cloud City. We get a sense right from the start that Luke’s already at a disadvantage, which plays directly off of the previous scenes on Dagobah.

For a majority of the scene, we rarely get any character close-ups. Instead Kershner remains in medium or wide shots that allow the audience to watch the action unfold. This is in stark contrast with the current action-film trend of tightly cropped, jumpy camera work that makes it difficult for the audience to follow what’s going on.

Though dialogue isn’t heavy during this scene, Kershner still needed to establish a version of the shot/reverse shot. He was able to do this several times throughout the sequence by placing the audience just off to the side and over the shoulder of each character as seen in the incredibly impressive dolly shot below.

While simple in technique, its visual implication is massive to the story… Through this shot we gain a sense that Luke is not ready for the encounter, just as Yoda and Obi Wan warned.

Post-Production of the Scene

Post-production for the scene was heavy on visual effects. Today most people can simply add a lightsaber in After Effects, but the process to create such an effect was far more daunting in 1983. Still, the majority of what made this scene so special was the editing of Paul Hirsch.

Paul couldn’t have the fight scene drag out for seven minutes straight, as you saw in the video above. While it’s interesting to watch, he knew other things were going on at the same time based on the script. By working with Lucas and Kershner, he made cuts that would allow the duel to play out alongside the attempted rescue of Han Solo from the hands of Boba Fett.

Another editing technique he employed: jump cuts during the actual duel itself.  In order to amp up the pacing and keep the duel exciting and emotional, he would jump cut from wide to medium to close to wide and so on.

Again, the editing of the scene is what really makes it all work. The pacing and structure are so perfect. It’s why this is scene is one of the greatest scenes in not only Star Wars history, but film history.

What do you take away from the filmmaking techniques on display in the scene? Tell us your thoughts in the comments below.