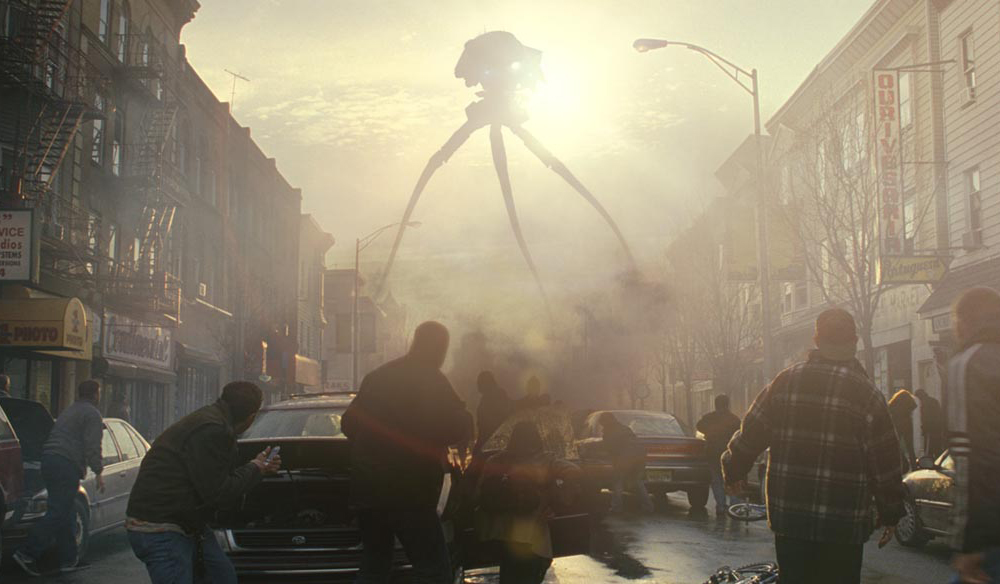 Deconstructing the Scene: War of the Worlds

Let’s take a detailed, step-by-step look at what went into creating one of the most riveting scenes in recent film history: the alien attack that launches the War of the Worlds.

A well-developed scene has a million moving parts. Let’s take a look at how those parts come together to make something amazing. We’ll take a detailed look at the craftsmanship of a scene from all major aspects of production. From pre-visualization to the final edit, we’re going to discover exactly what it takes to create something iconic.

For this experiment, let’s take a closer look at a scene from Steven Spielberg’s War of the Worlds. In this roughly two-minute scene, we’ll explore several aspects of the entire production, from previsualization, cinematography, staging, editing, and visual effects.

It All Begins in Pre-Production

Going into any scene, you must have a developed concept. Set yourself up for success by storyboarding the scene. This will be the foundation you work from before you ever even call action. For a scene like this one, there was a long and detailed previsualization process due to the high volume of visual effects.

I’m lost unless I’ve preplanned an action sequence – first in my head, then on paper, then finally, over a period of weeks, on film.  – Conversations with Filmmakers Series, Steven Spielberg Interviews.

Spielberg and the concept artists from Industrial Light & Magic didn’t just create static storyboards. They developed animated storyboards that allowed Spielberg to move around in the space and precompose his shots. By having this type of interactive storyboard, Spielberg was able to discover the best way to move the camera within the mocked up location space. He was also able to use them to give the actors a rough draft of the scenes they were filming.

Set Design of the Scene

The right location is everything. You can convey a lot to the audience by the locations you pick to go with your scene. For this particular scene, the scouting team selected Newark, New Jersey. It’s close to the big city, but has a very small town community vibe, which was crucial.

By utilizing a small township atmosphere, Spielberg was able to position the main character as an everyman, rather than a typical hero. Also, by choosing this location in conjunction with the narrative of the character, the film can now relate to a much broader audience.

It’s important that you look at the location in the full context of the story and in the details of the scenes you need to shoot there while keeping in mind the logistical requirements that must be met to actually shoot there. – Katy McCurdy, Location Manager

Cinematography of the Scene

In traditional Spielberg style, he sets up the action with a wide establishing shot, which includes our main character. He then gives us additional coverage of the scene to heighten the sense of space and numbers. He starts this by capturing a reactionary cutaway of stacked extras within the frame. This gives the audience a sense of unsureness and fear, which is amplified by the charging of the Tripod’s ray guns.

As we hear this charging take place, Spielberg and cinematographer Janusz Kaminski use several framing techniques to increase the tension. It starts with a quick dolly of patrons looking through a shop window, then cuts to a rack focus from our main character to a man holding a camera, which connects to another shot momentarily. They end this build-up of tension by utilizing a sweeping dolly shot, starting off as a medium and finishing as a close up on Tom Cruise.

By framing this section of the scene in this way, Spielberg and Kaminski are able to increase the visual tension to go along with the audio, which perfectly sets up the audience for the upcoming action sequence which jump starts the rest of the film.

Spielberg’s longtime editor Michael Kahn followed the pacing set by Spielberg and his crew.  But where Kahn really shines is when we have to transfer from the actual set location to a sound stage for a visual effects shot, and this happens during the department store sequence.

For this section of the scene, Spielberg had to film Cruise running through the door of the department store, then film him in a controlled set for an effects sequence, then film him on location again as he runs out the back door. This, of course, came with some major challenges for editor Michael Khan. To get around these challenges, he got creative.

To transfer the main character in and out of the store, Kahn utilized the movement of the people around Tom Cruise. So, as Cruise enters the store, he uses the crowd to mask his transition wipe. Then after the car bursts through the window, Kahn uses a b-roll shot of people running across the frame to help with the transition of Cruise leaving the building and running for his life. It is here that Kahn chooses not to cut, leaving a long take that allows the audience to connect with Cruise and catch their breath.

Developing the VFX for the Scene

The visual effects for this particular scene are nothing short of amazing. There are so many moving parts in order to get all of the elements in correct relation to one another. This is particularly evident during the initial attack, as our main character rushes through the street while other citizens are zapped and turned to dust around him.

In order to pull off this shot, Spielberg first worked with the VFX team at ILM in pre-production. They knew that they had to film a plate of people running down the street and pretending to be struck by a ray gun.

From this plate they built the VFX work on top by mapping the frame and tracking the camera movement. This was then applied to the 3D animation software they used to create the various elements. Not only did they use 3D elements, but they used practical elements as well, filming the clothes and dust in the air. Once all of the assets were placed together within the comp and rendered out, we end up with an impactful scene that sets up the action for the rest of the film.