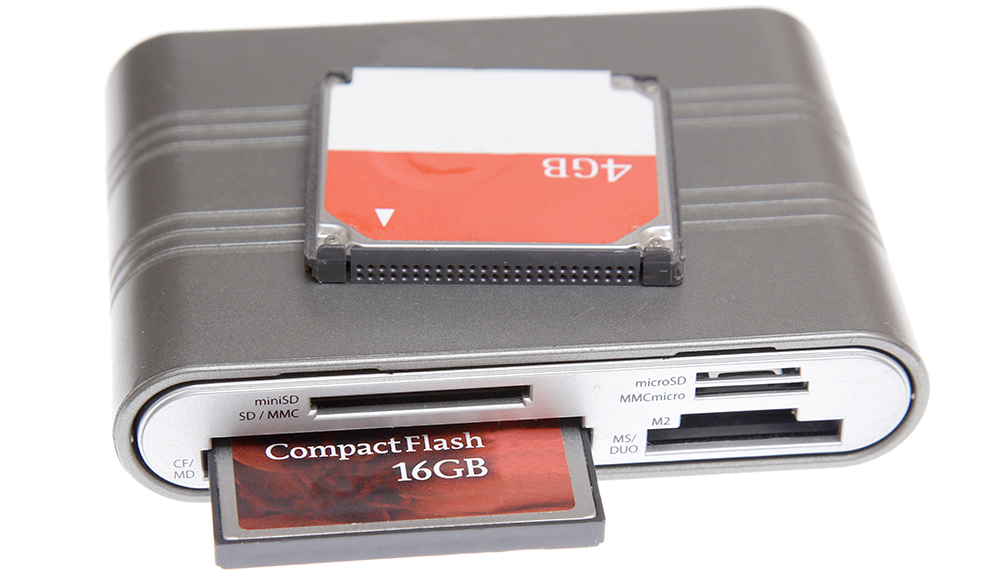 Everything You Need to Know About CF Cards

Shooting on Compact Flash cards? In this post we take a close look CF cards.

Let’s get the simple stuff out of the way first…

A CF card (CompactFlash) is a small memory card used in many modern camera systems. CF cards are durable, fast, and portable, making them a great option for professional photographers and filmmakers alike.

How to Read a CF Card

When it comes to CF cards, or any memory card for that matter, there are two important things to consider, size and speed. On a CF card storage size is usually prominently displayed on the front. At this point in time, CF cards come in a wide variety of sizes from 4GB to 512GB – quite a range in storage space!. Prices range anywhere from $10 to $900 depending on the size and speed of the CF card.

CF cards don’t always write at the same speeds either. So be sure to check both the minimum and the maximum read/write speed with your card. Just because your card can write up to 95mb/s doesn’t mean it can sustain that write speed for an extended amount of time.

Card read speed is usually displayed in either MB/s or “x”. It is more helpful to get the CF read speed written out in MB/s, but you can easily convert speeds shown to MB/s by dividing the “x” number by 6.6666. For example if a CF card has a speed of x1000 on the outside it will have a read speed of around 150MB/s.

On most modern CF cards you’ll see a small clapboard with a number . This refers to the minimum/guaranteed write speed we talked about earlier. If you’re a filmmaker this number is incredibly important because it is the speed at which a camera can write to the card indefinitely. Your needed card speed will all depend on the resolution, codec, and the camera you are using. For most non-RAW HD circumstances a minimum read speed of 20MB/s should do the job. As of right now some CF cards can reach write speeds of up to 155MB/s. However, as 4K and RAW recording becomes more prevalent the need for faster CF cards will increase.

Most CF cards also display what UDMA class they are a part of on the outside of the card. These classes are directly related to card speed. CF cards are backwards compatible, meaning you can use a UDMA 7 card on any camera that takes a CF card. However, just because a camera accepts all CF cards doesn’t mean it is optimized to get the most of that specific CF card. If you are wanting to use a newer CF card on an older camera make sure you update the firmware so you can use the maximum write speed.

Practically, CF cards work via 50 pin holes that connect inside a camera or CF card reader. These pins are definitely the biggest downside to using CF cards over portable storage cards. Because all 50 pins must line up perfectly they can sometimes bend, requiring maintenance to your camera or card reader. If this does happen to you it’s not the end of the world. A small screw driver should be enough to bend the pin back into place…but obviously, use caution.

Once connected, a CF card is completely straightforward. Just format the card and record. CF cards use either FAT32 or exFAT formatting making them cross compatible between Windows and Apple products.

There is a lot of debate over which memory card format is better. Both SD and CF cards have their advantages and disadvantages. SD cards tend to be much cheaper than CF cards, but CF cards tend to be faster and more durable than the smaller fragile SD cards. SD cards are easier to misplace or damage, but if you keep your memory cards in a memory card wallet (as you should) it shouldn’t be an issue.

As of right now there aren’t many significant technical differences between SD and CF cards so it really comes down to preference. If you are going to be shooting in rough conditions CF cards might be the way to go, but if you shoot more casually SD cards might be better.

CF (CompactFlash) cards should not be confused with CFast cards which were created to be the next step in the CF cards evolution. As of right now CFast cards are, as the name implies, faster than regular CF cards. However, they are much more expensive than their CF counterparts. A typical 60GB CFast card costs about $400! For that price you can get a 256GB CF card. It’s impossible to say whether or not CF cards will be replaced by CFast cards as of right now. However, some newer cameras like the Blackmagic URSA are already accepting CFast cards instead of CF.

The future of Compact Flash Cards

It seems like CF cards will be here to stay for many more years to come with the CF Association theorizing that cards could reach a theoretical 144 petabytes, or 144,000 Terabytes. Only time will tell, but for right now CF cards are a safe bet for photographers and filmmakers alike.

Which Brand is Best?

There is definitely a lot of debate as to what CF brand is better. Lexar and SanDisk are the largest (more people tend to use them) but other brands like Kingston, Transcend, and Komputer Bay are all very legitimate alternatives. I have owned CF cards from Lexar, SanDisk, Transcend, and Komputer Bay and none of them have ever crashed, even while running Magic Lantern (knock on wood!)

Do you have a favorite CF card brand? Share in the comments below.