Cheers to This Film-Developing Beer Made in Collaboration with Kodak

Dogfish Head and Kodak have partnered on SuperEIGHT, a mid-octane beer with taste, class, and a twist: it can also develop your film!

It’s not every day you get to talk about two of your favorite topics — filmmaking and booze. But with the collaboration between Dogfish Head brewery and film giant Kodak, you can get the best of both worlds.

Now, you have the option to choose whether you are going to drink a SuperEIGHT, the new sour German-style wheat beer, or use it to develop film.

Exactly how does this work? First, check out this quick short Kodak developed with SuperEIGHT.

You might be wondering how this collaboration came to be. Well, it all started during a chance conversation. Dogfish founder & CEO Sam Calagione first learned about this process while on a Kodak podcast. He learned that if the pH of a beer is low enough, it could develop Kodak Super 8 film.

Calagione took that challenge, creating SuperEIGHT. Here’s what he has to say about the project, and new brew.

SuperEIGHT, a clever play on the Super 8 Kodak film, is a beer brewed with eight extraordinary ingredients: prickly pear, mango, boysenberry, blackberry, raspberry, elderberry, kiwi juices, and toasted quinoa. With some Hawaiian sea salt tossed in the mix, the beer develops into a 5.3% ABV Gose.

The beer was designed to be high in vitamin C, with an acidic punch, making it ideal for film development.

Calagione went on to say the following:

With the meteoric success of SeaQuench Ale growing to be the best selling sour beer in America, we learned from consumers that approachable, refreshing, super-flavorful beers are what they’re seeking, when making choices about beverages. We’re listening, we heard you, and we think you’re going to love our wildly delicious SuperEIGHT.

Dogfish Head and Kodak are committed to making a film using SuperEIGHT — to be released later this year. If you’re interested in trying the beer, and processing some film with it yourself, Kodak has provided the following recipe. 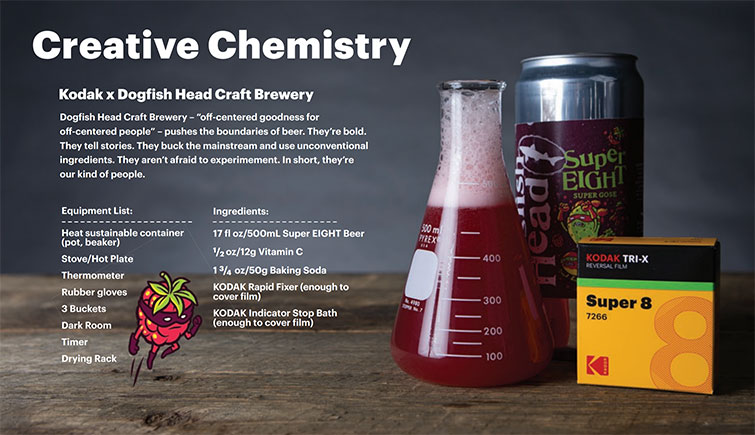 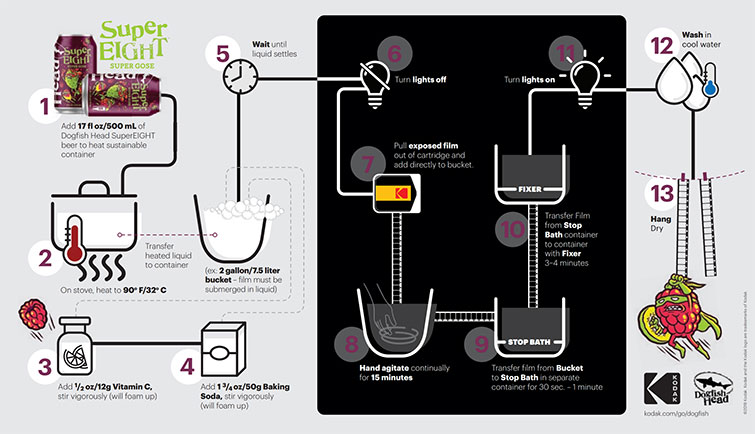 Directions for Developing with Super EIGHT

Add SuperEIGHT beer to your container.

Congratulations, you just brewed your batch of film!

Dogfish SuperEIGHT will be available in 12 oz. cans in April.

So, next time you’re caught with a case of beer in the grip truck, tell them “Dude, it’s actually for processing.”

Whether you’re processing your film or your buzz is up to you.

All images via Dogfish Head/Kodak.