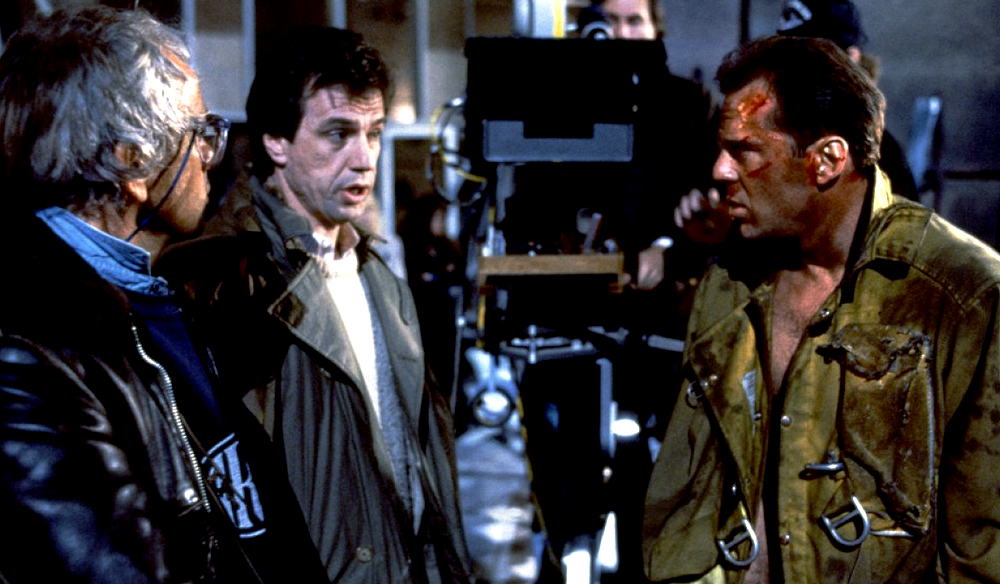 Learn how to frame action sequences from the undisputed masters of the action film genre. From storyboards to lens choices, here’s what you need to know to make things go boom.

Top image: John McTiernan and Bruce Willis on the set of Die Hard

When we think action films, we immediately think of the 1980s — the genre’s heyday. What made these films so great was the way the filmmakers approached the concept of how to frame the action they wanted to see. It was more calculated and specific.

It’s hard to pick the ultimate action director of the 1980s. The list of possibilities is long and includes directors like John McTiernan, Tony Scott, Steven Spielberg, James Cameron, Richard Donner, George Miller, and others. Let’s look at what made them so great at framing action sequences and look at the way they influenced the action films of today — for better or for worse.

How to Frame the Action

Before you shout out action, you need to have an idea of what you’re filming. You need to go through the previsualization process. This includes many things, but chief among them is storyboarding. By taking the scene from your mind to paper, you’ve given yourself a leg up when it comes time to choreograph the stunts. Storyboarding also makes the rehearsal process much easier.

Remember, previsualization is the part of the process where you make a bulk of the decisions on how the scene will go. So take your time storyboarding and know that there are two different ways to go about it. One way is to draw them, like The Matrix storyboards above. You don’t have to be Leonardo da Vinci to draw storyboards… crude drawings are just as good to figure out how to frame the action and get the shot you want.

If you/re not an artist, rest easy. You can replace the drawings with written text detailing your scene. Just place the text into squares. Either way, storyboarding ahead of time will make things so much easier for you, especially as we go into the next step.

Now that you’ve got your scene down on paper, you can begin the process of rehearsing it. And believe me, no matter what type of action scene you’re putting together, you’re going to want to rehearse it before you frame the action. If it’s a lightsaber battle, rehearse it. If it’s soldiers exchanging gun fire with explosions around them… rehearse it. Even if it’s a simple fist fight, rehearse it. There are two reasons for doing this.

The first and most important reason is safety. You want your cast and crew to be as safe as possible, and you can do this by rehearsing the scene so everyone knows where they need to be and how they need to play the scene out. Think of all of the lightsaber duels we’ve seen throughout the years. If actors like Mark Hamill didn’t rehearse those ahead of time, they wouldn’t have looked as good — and the chances of injury would have gone up dramatically.

The second reason is artistic in nature. You may have storyboards and the scene in your head, but once you get the actors in place for a rehearsal, you may find that there is a better angle. If you didn’t rehearse the scene, you would have gone into production having to make those changes in the heat of the moment instead of locking down and framing the action.

In order to capture and frame the action you need the equipment to get the shots you want. I like to storyboard my scenes and have a plan in terms of which equipment I want to use. When I go into the rehearsal stage, I’ll check that equipment and make adjustments as needed. But again this all depends on the type of frame you want to use to capture the action.

When thinking of framing, you should know that how you frame the action relays a specific emotion to the audience. With fight scenes in particular, you want to use the frame to your advantage in order to give the audience a breather… or wear them completely out.

One of the best modern films to give us solid action mixed with “quick breath” moments is Kill Bill. Here we see the fight between the Bride and Vernita. Where Quentin Tarantino really shines is by cutting back and forth from a wide to a close shot. This immerses the audience right into the fray, but then also gives them moments to orient themselves and take a breath.

If you want to frame the action in such a way that your audience is as worn out and tired as the protagonist, then pull them right into the thick of things and don’t take them out. One scene that jumps into mind is one of the last fight scenes in the Batman Begins. Here Christopher Nolan crops the action really tightly… even the one wide shot is cropped in pretty tight. This places the audience right in the thick of the exhausting action.

Another way to frame the action is to place things in the foreground. Steven Spielberg does this just about better than anybody. For instance, he captures much of the action in a wide angle, but gives the scene spacial reference by placing things between the main action and the camera.

When framing action where explosions are taking place, you want to capture most of what you need in a wide shot. This way you can get a real sense of the total destruction. Of course, you should capture close-ups of the explosions in order to give the scene a more chaotic feeling. We can see this clearly in Mad Max: Fury Road.

A great example of how to film a gun fight is from the recent film John Wick. Here we see a mix of medium and tight shots. For the most part, we live in the medium shot, which allows the audience to develop a sense of space and see where enemies are coming from before the character does. Then by using the steadicam to move freely in the space, the audience can feel as if they are only a few feet from the action.

Car chase action scenes are an entirely different beast. If you don’t have Tom Cruise, chances are you’ll be staying wide for the most part. But if you do happen to have a skilled actor like Tom Cruise to drive the car (as Christopher McQuarrie did in Jack Reacher), then you can easily capture wide shots, then mix in medium shots from another car rig, while even grabbing close shots of the character in action.

What are your thoughts in terms of framing action sequences? Were these tips and inside looks helpful to you? Sound off in the comments below.