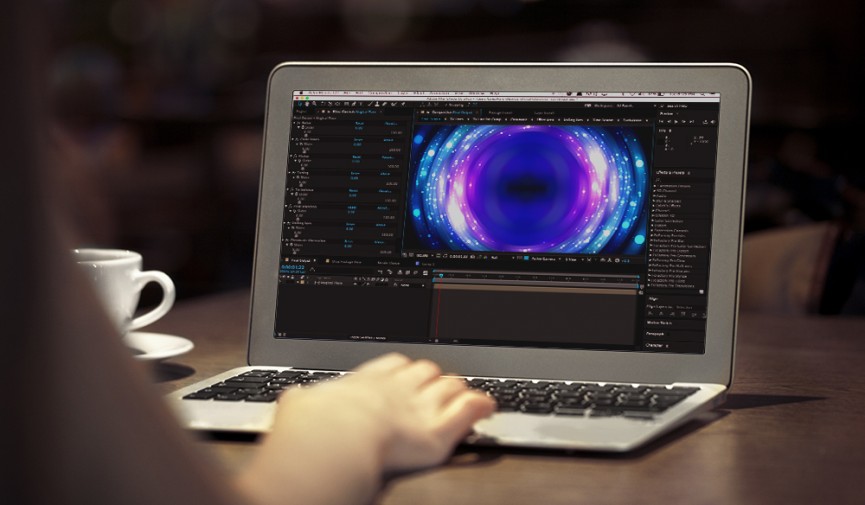 Tutorials are a great way to learn something new, but at what point does an awesome tutorial go from being a good thing to a bad thing?

In the following post we’ll take a look at how to stay inspired and create ‘original’ work. Motion graphic mastery is a journey that can only be traversed one step at a time.

Why Does My Original Stuff Look so Bad?

If you’re like me, then you probably set out on your motion graphic journey through the help of an inspirational source. Maybe it was VFX in a movie. Maybe it was an animated short. For me it was Video Copilot, or more specifically Andrew Kramer. Andrew taught me that you can create amazing effects through creatively thinking through a problem and finding a visually pleasing solution.

Each tutorial’s end result was always more impressive than the last, and pretty soon I was creating amazing effects like bullet hits, light sabers, and fancy titles just like the movies — or so I thought.

While some of the videos were hard to follow, I was, for the most part, able to create amazing effects in only a few minutes. The mindset was: if I was able to follow a tutorial with ease, surely that meant I could create effects of equal visual awesomeness on my own? Right?

Well, not so much. I’m sure that you are on, or have been through, a similar journey and you’ve likely found that there is much more to creating visually stunning compositions than watching a tutorial. A true sign of motion-graphic mastery is being able to create something new, yet it’s the originality part that paralyzes so many motion designers in the industry today.

Try it yourself. Open After Effects and create something that is both original and awesome in 30 minutes. Every now and then, you might be able to come up with something amazing from scratch. More often than not, however, time will expire and you’ll have an end result that is not even close to the latest Video Copilot tutorial.

Don’t let this likely reality discourage you, in fact, there are very few people who can simply create something from nothing at the drop of a hat, and even those who can are subconsciously drawing their ideas from past inspiration. It’s innovation — not originality — that will help you refine your skills as a motion artist.

Have you ever been watching a video tutorial and the host says something to the effect of, “Why don’t we make this blue instead of pink, and… how about we use this font” and boom… suddenly they’ve created the most amazing motion graphic piece you’ve seen all week. It can sometimes be discouraging.

You can’t make a decent title sequence to save your life, yet this person has somehow created an incredible typographical sequence with just a few mouse clicks. It’s a sure sign that you should just give up now. They’re clearly at a level you will never be, right? Not exactly. Here’s a few reasons why:

In the age of the internet, brevity is rewarded and tutorial makers know this. What you don’t see in 15 minute tutorials is all of the messing around in After Effects that took place in order to show you how to create something awesome. Now, I’m not talking about simple tutorials, but rather the visually stunning examples of mograph ingenuity. These tutorials were either inspired by a real shot (in which the host is simply emulating an existing scene) or created from scratch, which takes some serious time. So don’t worry if you can’t create stuff that’s equally awesome in 15 minutes. Good design takes time… and over time you’ll be able to create awesome stuff faster.

2. Hosts Draw on Past Inspiration

Creativity doesn’t happen in a vacuum. Whether you’re aware of it or not, you and every other artist in the world is being affected by the world that surrounds us. William Ralph Inge, a famous English author, said:

“What is originality? Undetected plagiarism.”

This statement, when you first hear it, sounds untrue. However, if we really dive into it, it’s actually a very accurate way to describe creativity. Whether we know it or not, we, as motion graphic designers, are drawing on past inspirations. Decisions like font choice, how long to keep an object on screen, and animation timing… it’s all predicated on the fact that we have tried to use something different in the past and failed. It’s through trial and error that we become better as motion designers and learn what does and doesn’t work.

Tutorial hosts have gone through this process for every awesome thing they’ve created. There are many more terrible things that you’ve simply never seen before and they’ll be the first to tell you.

This is all fine and dandy, but what are we to do with this information? Well, the short answer is: don’t give up! Here are a few tips for overcoming motion graphic paralysis.

Before your next big motion graphic project, try doing some research to figure out what style you want to go for. Take bits from multiple sources and put them together to create something entirely new.

Think of something awesome? Write it down. You’re much more creative than what you give yourself credit for, it’s just that creativity tends to happen at the most inconvenient times. If you write down your ideas, you can reference them later.

When you think you’ve hit hit your creative limit, you’re probably right. Go out, find some inspiration, and start creating again. Creativity is a cycle. Constant inspiration can help you break up your routine and try something new. There are a lot of great inspirational resources out there, from Vimeo channels to blogs. You just need to know where to look.

4. How Can You Make it Better?

There has never been a perfect animation. While things may seem amazing now, it’s likely that they will seem lame in just a few years, so there’s always room to improve. In everything you watch, ask yourself: how could the artist have made this better? Or, better yet: how can I make this better?

Chances are you’ll be able to come up with a lot of really good ideas off the top of your head. The trick is applying this same logic to your animations. Be grateful for your progress, but discontent with where you are. There will always be more to learn, no matter your skill level.

“The reason we struggle with insecurity is because we compare our behind-the-scenes with everyone else’s highlight reel.”

It takes time to become a motion graphic expert, so don’t give up. It doesn’t happen over night. Through trial-and-error, and some awesome tutorials, you can become a mograph master.

Want to add fuel to your creative fire? Check out a few of these awesome resources:

How do you stay inspired? What’s your secret? Please share in the comments below.