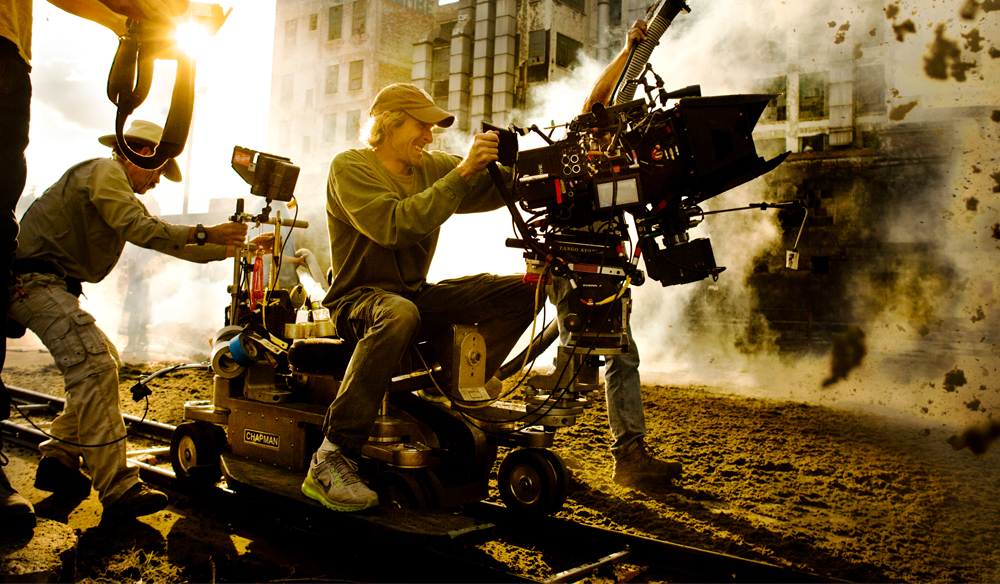 How to Craft an Epic Tracking Shot Like Michael Bay

When you need a truly EPIC tracking shot, turn to the undisputed master of bombastic cinema: Michael Bay.

Most filmmakers love to utilize tracking shots in order to add motion and pacing to a scene. Stanley Kubrick captured that motion through the use of a Steadicam. Michael Mann puts the camera on a shoulder rig. David Fincher keeps the camera locked down and uses a dolly system to capture movement.

While all of these filmmakers produce amazing work, none of them quite capture epic tracking shots like Michael Bay.

Love him or hate him as a director, there is one thing Michael Bay does better than anyone else: epic tracking shots, using multi-layered composition to capture a moment in time. Let’s look at how Bay captures these epic tracking shots after watching this reel that highlights his special brand of Bayhem.

Nicolas Cage in The Rock via Hollywood Pictures

For lens options, Bay will always use a telephoto lens. By using this lens, he can compress visual information down and focus on the subject or object, forcing the background to pass by at an incredible rate. The lens is almost always placed at a low angle, which really adds to the scale factor and turns the shot from a really cool tracking shot to an epic one.

As we stated before, the camera movement accompanied by the telephoto lens forces the background of the shot to move across the screen at a fast rate, an effect called parallax. One of Bay’s greatest skills is his ability to place visually interesting backgrounds behind the characters or objects. By adding backgrounds with a lot of visual information, he can enhance the movement and parallax effect.

Dwayne Johnson in Pain and Gain via Paramount Pictures

Now, in order to really pull off the epic tracking shot, Bay almost always has his actors moving vertically and turning in a horizontal motion that contrasts that of the camera. The actors are always looking just off screen at where ever the action is or was. More often than not this shot is used as a reactionary shot. It’s sometimes referred to as “the hero shot,” as it really highlights the character or characters.

Finally, to make the epic tracking shot truly, well, EPIC, Bay will slow things down. He doesn’t slow things down to a crawl. Rather, he slows it down slightly. By doing this, the shot paces really well, but becomes more dramatic at the same time. Slow motion is a good technique to use in action films when you need to add some tension and give the audience an opportunity to really sit in the space.

Again, love him or hate him, these epic tracking shots are visually impressive. There’s really no question that Michael Bay knows how to frame an action set piece or dynamic shot. Now, overall storytelling is another matter, and one we won’t get into here. But this does beg the question… is Michael Bay really that bad of a director? Or is he a genius in disguise? Thankfully, we have Cracked to help us sort through it.

What do you think of Michael Bay’s epic tracking shots? Love them? Hate them? What is your favorite type of tracking shot? Give us your opinions in the comments below.