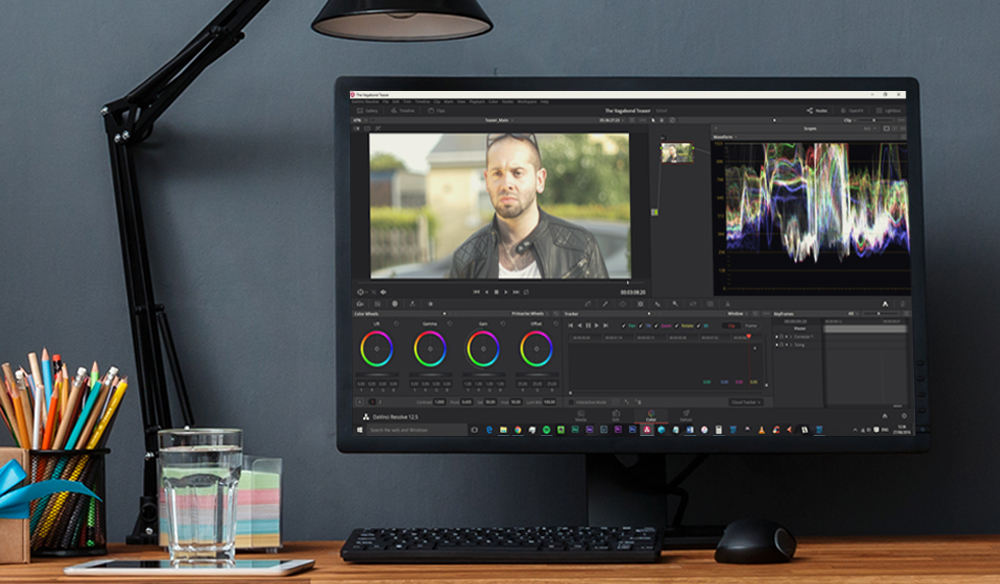 How To Salvage Overexposed Footage

You’ve overexposed your shot. Now what? Thankfully, all is not lost. Use these techniques to salvage overexposed footage.

When you’ve accidentally overexposed a shot, you’ll likely want to try to find ways to correct it. Unfortunately, it’s just not that simple. In fact, it’s not so much about correcting an overexposed shot, but how to salvage it.

As soon as your whites are sitting at the top of the waveform monitor making a straight line, that detail has been lost — and you’re not getting it back. Overexposure is, for the most part, incurable for digital footage. With film (celluloid), it overexposes with more of a beautiful aesthetic. The light shifts between the different layers of emulsion which can cause a soft glow to overexposed film.

The difference between an overexposed image in comparison with an underexposed clip is when a sensor is overexposed to the point that all RGB channels are maxed out, the particular area of the image contains no data whatsoever. You can try and lower the highlights, but it’s not going to bring back any detail. It will, however, give you a gray spot within that area. If your scene is unreasonably overexposed, well, there’s no fixing it I’m afraid to say; you either reshoot or scrap the scene.

However, if you find that there’s a particular small spot in your scene where the highlights are clipped, there may be a few things you can do to make the scene look a little better.

Add Color To The Overexposed Area

In the first take of the shot below, I had stupidly exposed for the actor while he was in the shade instead of his end point which was directly in the line of the sun. 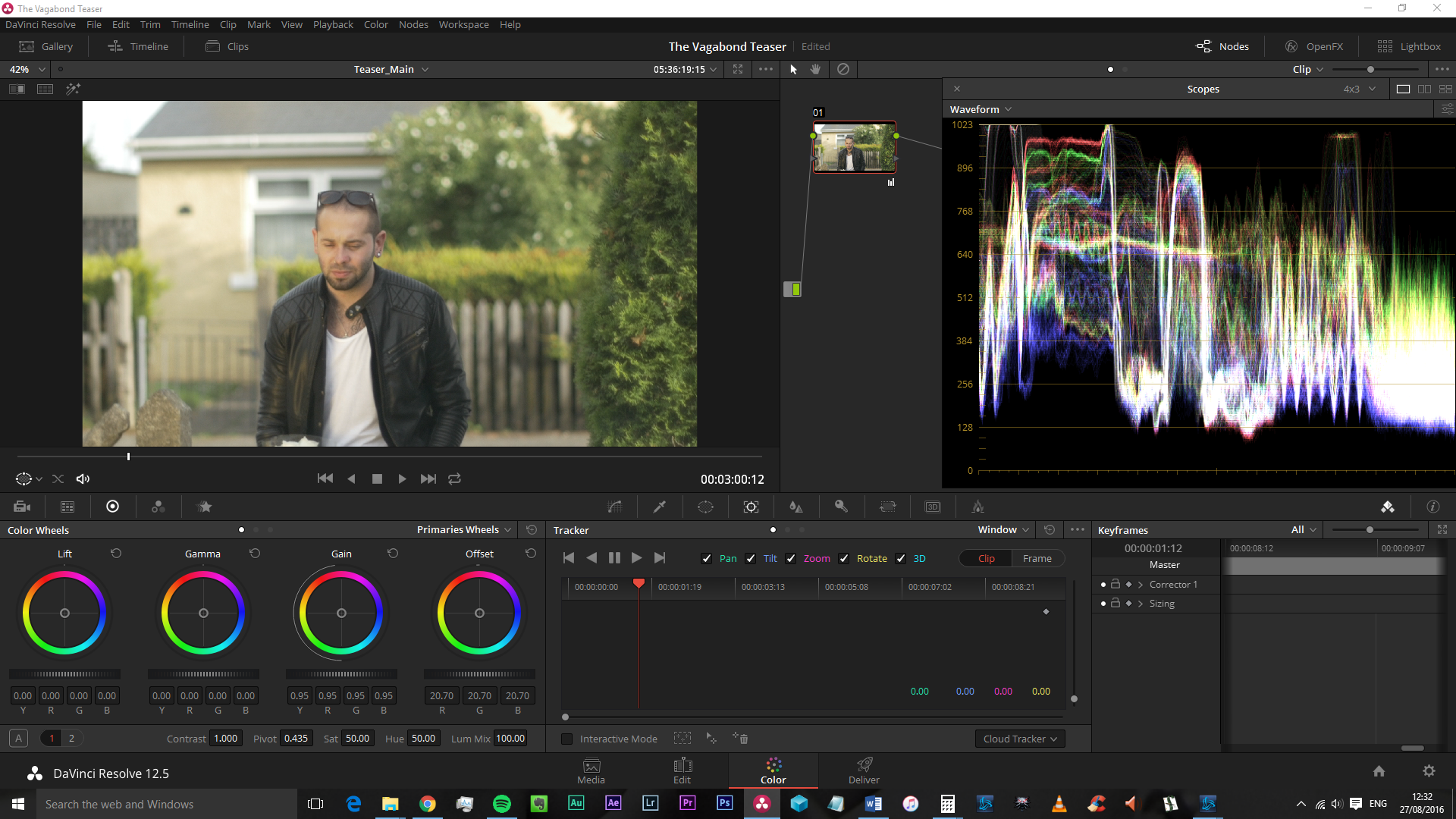 When he stepped into his final position, there was an area on his cheek which was overexposed. Admittedly, it could be worse. Nonetheless, as you can see from the waveform monitor below, I lost a small bit of detail within his cheeks. When he is still in motion, the overexposed area is very noticeable. 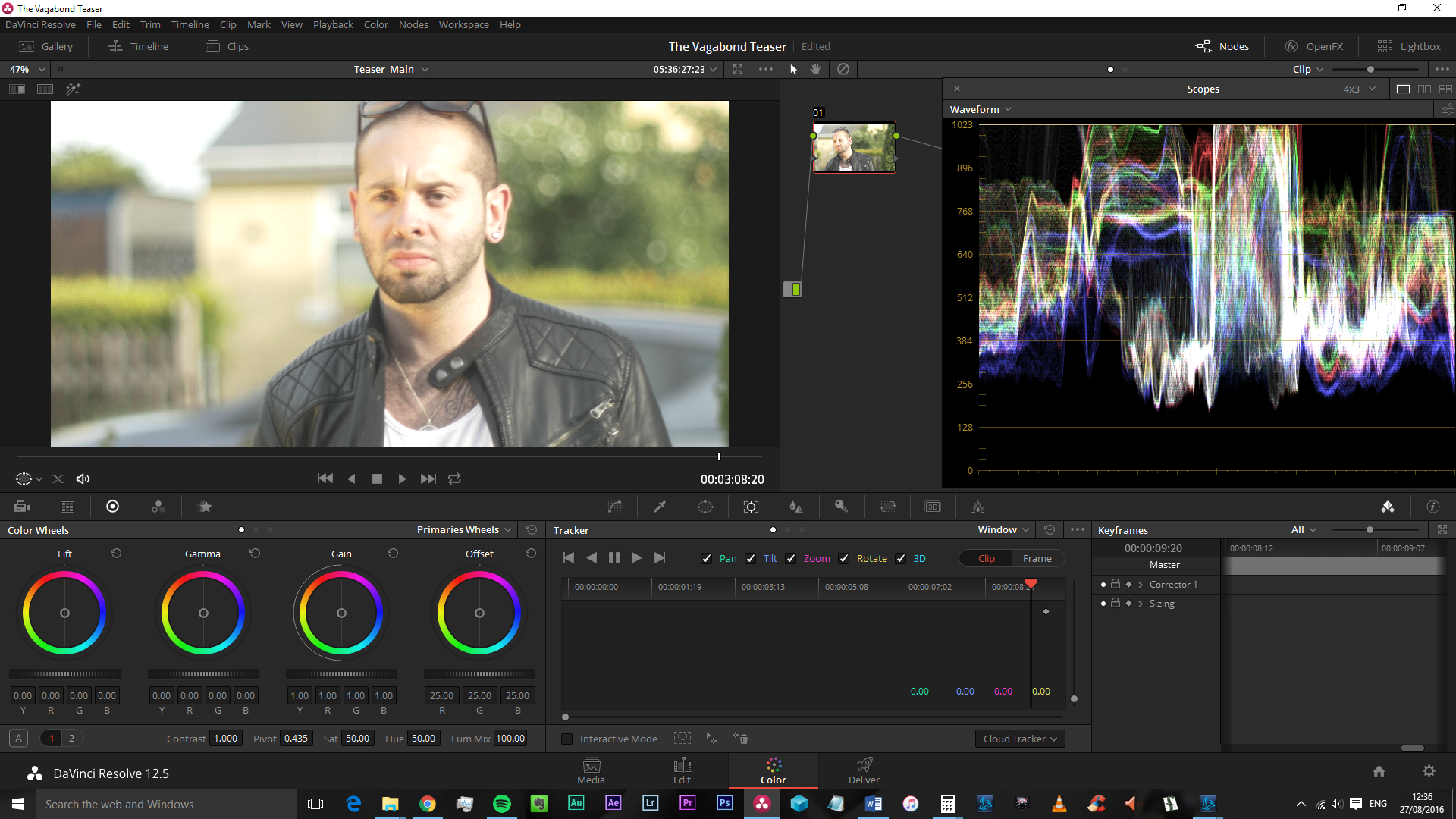 To limit the amount of highlights in the overexposed area, you can add color to somewhat hide the damage. You do this by doing the following: First, you need to bring the highlights down so you can add saturation to the image. Around 85/90 percent white value should be okay. As you can see in the waveform monitor below, there’s a straight horizontal line towards the top of the graph. This represents that there are some highlights that have been clipped. 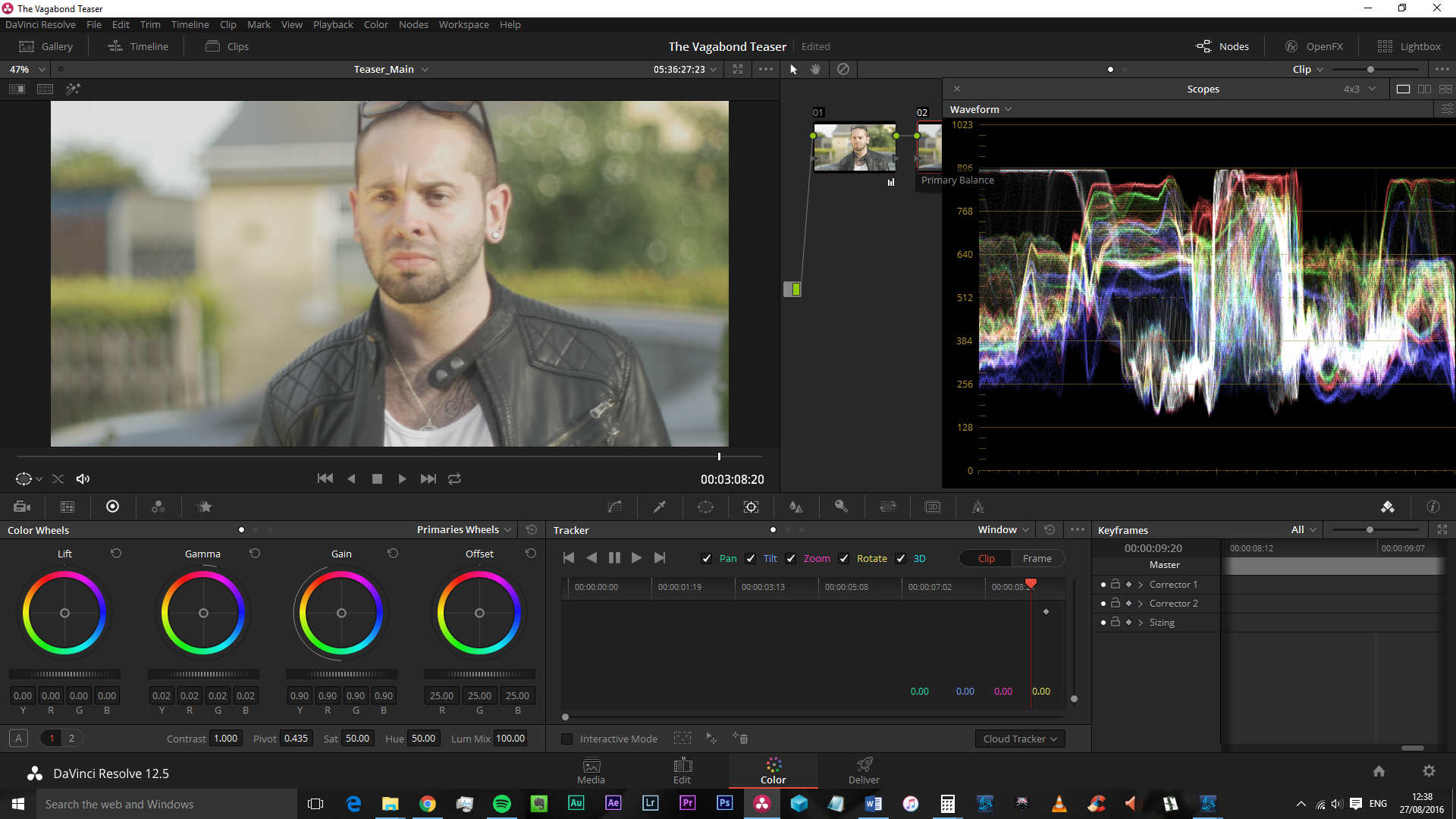 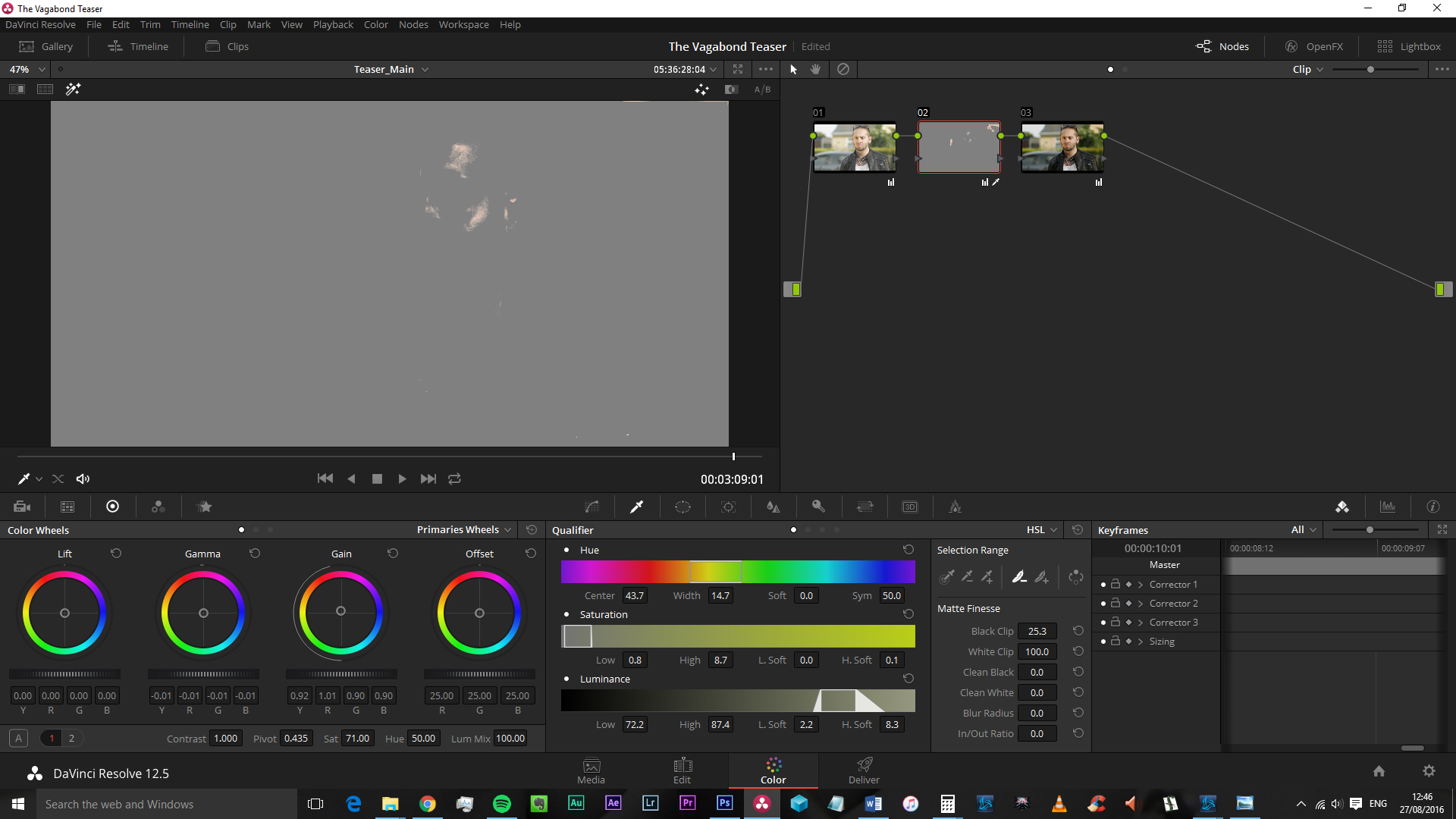 You may need to lower the highlight control and possibly increase/decrease the saturation of the patched area to make it blend in better with the surrounding area. With this, as seen below, your overexposed area should look a lot better.

Add a Haze to the Highlights

In the introduction, I mentioned the halation that can occur with overexposed film. You can mimic that effect with digital footage to ease the visual stress of having overexposed patches.

First and foremost, you need to bring down the overexposed highlights into the legal region. You need that white line at the top of the waveform monitor to fall around the 85-95 mark.

Next, like adding the color to the area, you need to isolate the overblown area using the luma control of the HSL qualifier. However, this time, extend the key to a slightly larger area than you did in the method above. In DaVinci Resolve, you have the option of blurring the area you’ve just isolated. You want to increase this according to your image. The more you blur, the more of a haze you will get. 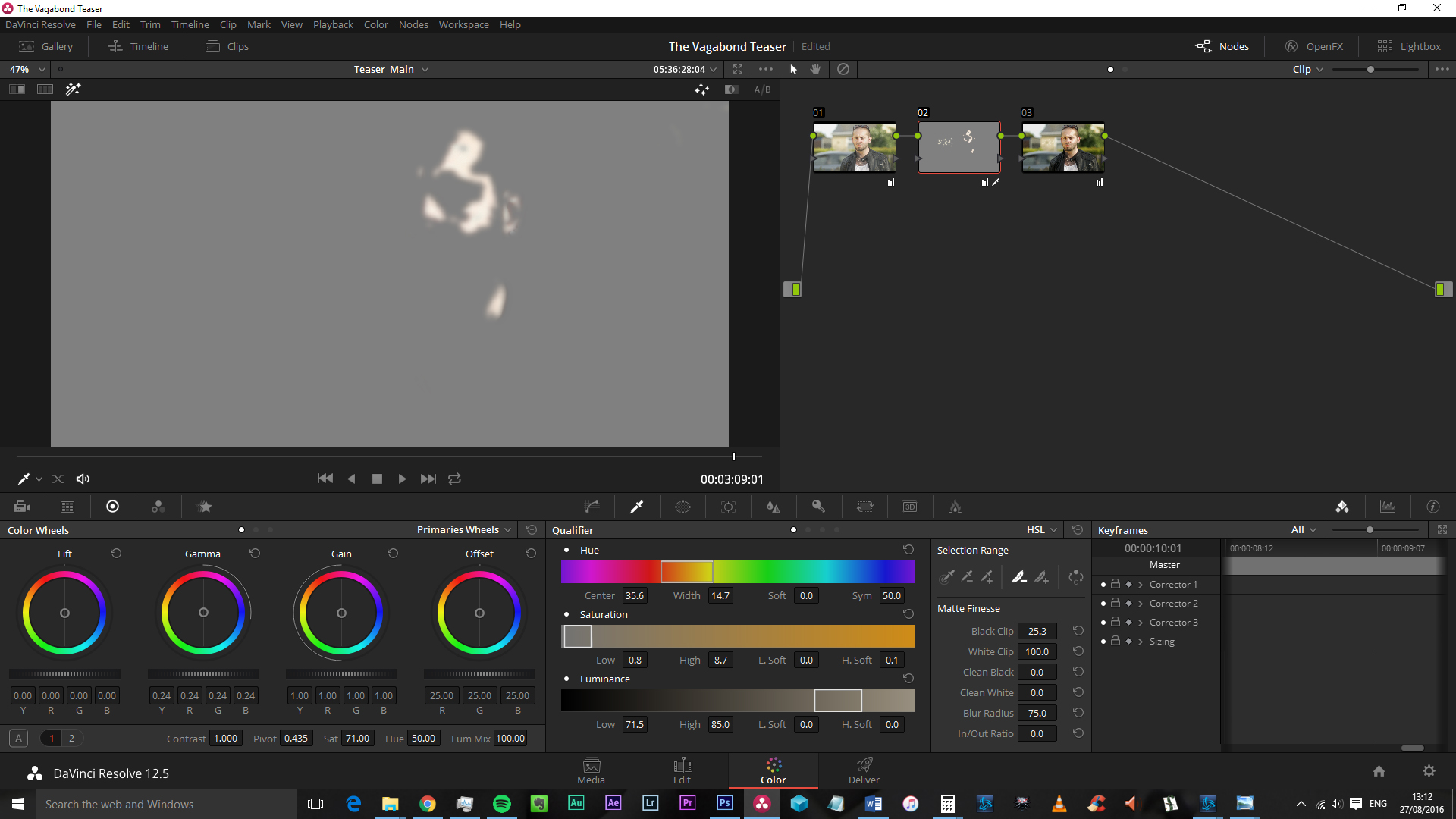 You then want to raise the midtones/gamma control to that layer/node you’ve just adjusted. The result should give you somewhat of a glow, similar to the way celluloid film glows when overexposed.

With the first method, we tried to mask the overblown highlights. With the second approach, we used the overblown area on his cheeks to our advantage and gave the image a soft glow. It’s actually smoothed the actor’s skin out quite nicely.

You’ve probably noticed that these aren’t fixes that will completely repair an overexposed area. It’s incredibly hard to set overblown highlights. However, it’s important to note that keeping certain elements — such as windows — in balance is a creative aesthetic. Some choose to blow out their windows, while other filmmakers will go to great lengths to keep their windows balanced.

There are some highlights which might not be worth preserving because they occur naturally, such as a sun glint on the side of a chrome motorbike handle. As long as these highlights are legalized, you’ll be ok to proceed with the image.

Got any additional tips for dealing with overexposed footage? Share them in the comments below!