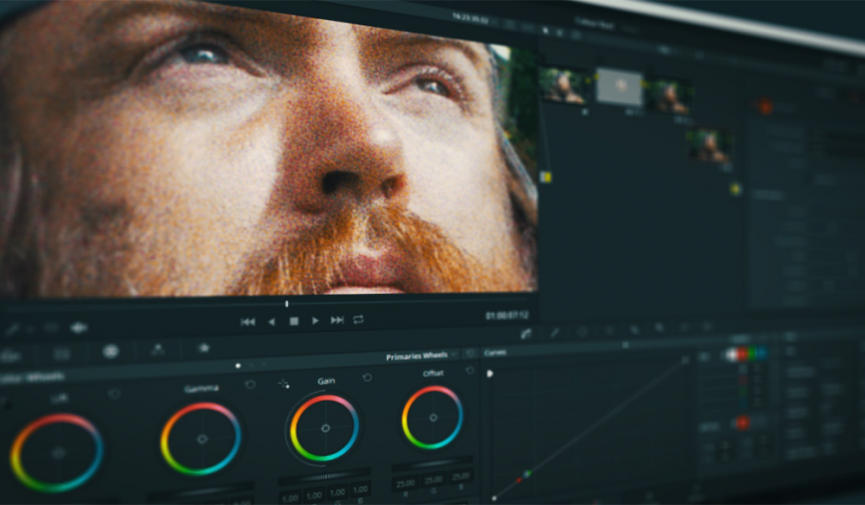 With the rise in accessibility of HD cameras, there’s one digital asset that has grown tremendously in popularity over the last decade, and that is film grain. From websites that supply grain overlays (like RocketStock) to companies that provide plugins that can help emulate film stock down to the color properties (such as Film Convert), the options for filmmakers are plentiful. To some, it’s somewhat paradoxical to layer a clean HD image with film grain, but for many, it’s a creative necessity.

In the studio version of DaVinci Resolve, there’s a ResolveFX Texture Film Grain effect. You can change the film type, the grain opacity, the composite mode, and plenty more. Given that Resolve 14 Studio now costs just slightly more than most grain plugins, let’s see if it would be worth it to pay a little extra and bag the studio version of Resolve — or if this grain effect is something completely different.

(It’s important to note that in Resolve, the grain is a procedurally generated layer of simulated grain. So we’re not receiving a scan of actual film stock. It’s a digital interpretation.)

Another important factor is that if you do decide to apply grain, or any effect, on the edit page, your nodes won’t have the FX logo to notify you that there is an effect present. However, if you display the thumbnails of each clip, you’ll be able to see which clips have effects applied to them on the edit page. 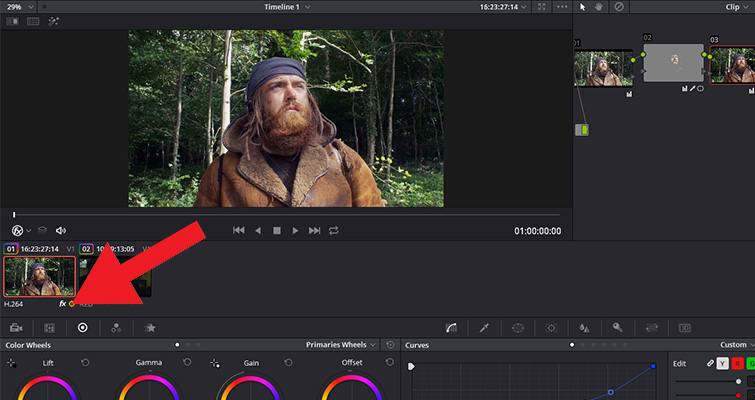 What effects exactly? That, it doesn’t tell you. Therefore, again, I would suggest applying effects that will affect the color and image quality in the color page.

To apply the film grain, first, create a new node, and open the OpenFX panel in the top right corner. With the panel open, scroll down until you find ResolveFX Texture — Film Grain. As the grain is quite far down the list, you can make it easier to find by either searching for the effect with the search tool or setting the grain as a favorite and selecting show favorites only.

With the node selected, your effects panel should automatically jump to the settings control of the recently added effect. This is the control panel for adjusting all of the customizable elements of the applied grain. The menu controls are broken into three different categories: main controls, grain params, and advanced controls. 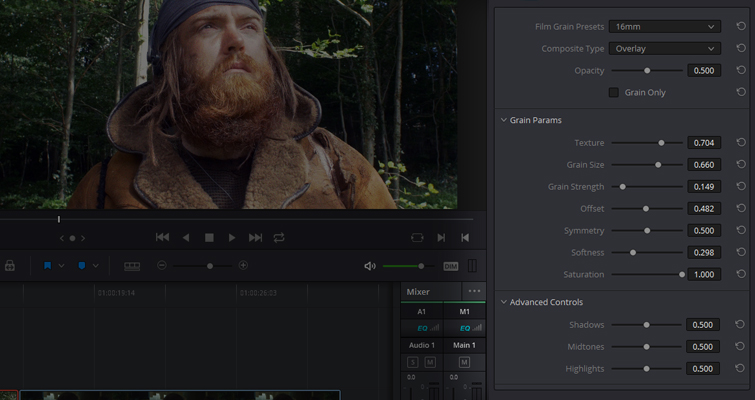 The main controls are going to be where you choose which film grain preset you want to work with, and how you want to apply that to your footage. If you open the film menu type, you’ll notice that along with the film size, there are also numbers and letters that appear alongside the size. These represent specific film stocks — different brands will have slightly different grain structures. We’re going to come back to this submenu later because it represents an important distinction over other grain plugins.

The param controls will be the settings panel that gives you creative control over the grain elements. For example, in this shot below, I think the grain is a little too strong and too colorful. It resembles ’90s television noise more than 35mm film grain. 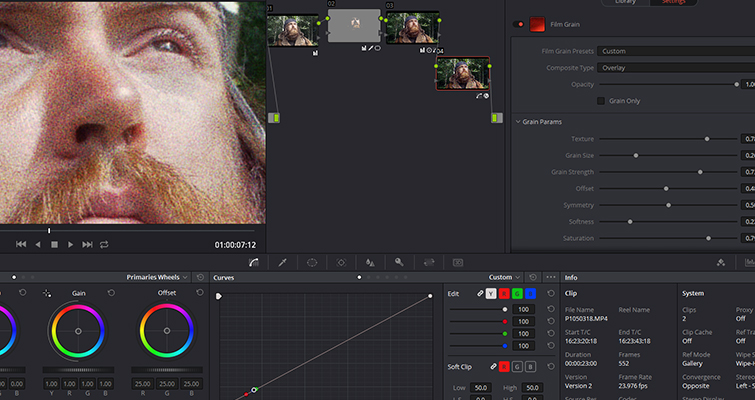 Therefore by adjusting the strength and saturation, I can adjust this preset to feel more organic. It’s a fantastic feature, and certainly, it’s something that you cannot achieve with a grain overlay. 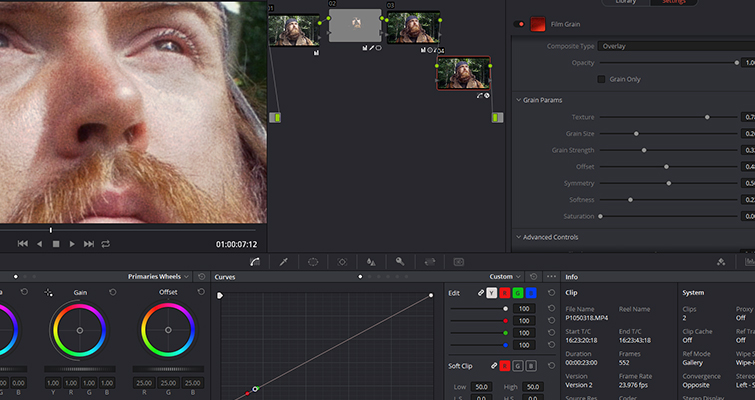 The advanced controls may be the best part of this built-in effect. The panel has three sliders: shadows, midtones, and highlights. These sliders will control the amount of grain that applies to these tonal regions. As a confirmed grain addict, one of the most significant issues I often face is applying a grain texture on a clip where there is already visible noise in the shadows. In this case, the noise becomes more prominent with the added boost from the grain. In Resolve, with these advanced controls, you can control the amount of grain that composites into these regions. 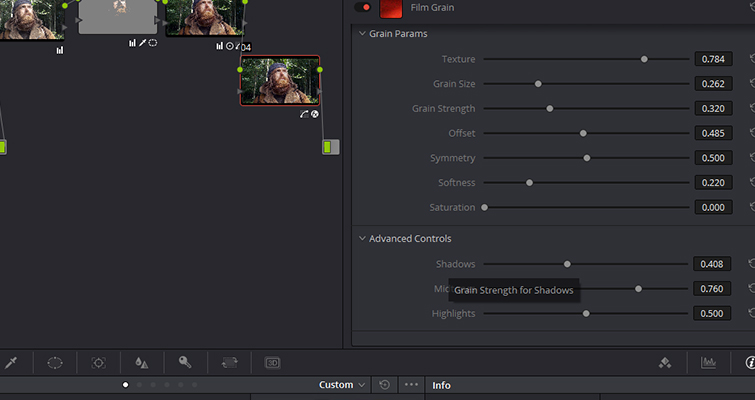 To wrap up, let’s jump back to the main controls. When you switch film types, you may notice the lack of artistic difference in the image, especially if you’ve come from using the FilmConvert plugin. As in FilmConvert, a simple switch from 5207 Vis3 to Portra 400 would drastically alter the color, the grain, and even the exposure intensity. And I think this is an important thing to highlight with ResolveFX grain, as it’s not an effect that is going to magically convert your HD media to footage that looks like it was shot with Kodak T200. It’s more of a tool that will help blend digital footage with celluloid footage — a tool that lets you add grain back to a denoised shot. At the very least, it will give you a basic starting point to work on building the 35mm film look. However, this isn’t a FilmConvert-like plugin. You will still need to correctly color the footage and adjust it to mimic a film stock.

On that note, for those who seek a method that will help convert their footage into celluloid-like media, this isn’t it, I would suggest looking at the various plugins on the market.