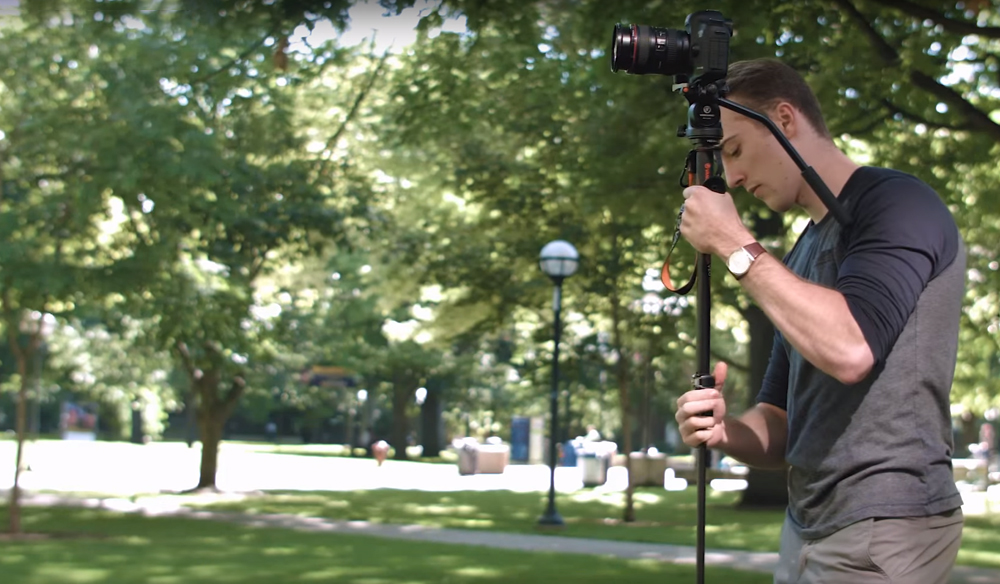 The Traveling Videographer’s Guide to the Monopod

Monopods advancements are the newest developments in the travel videography world. Here’s what you need to know.

A monopod is an excellent tool for traveling videographers who need that extra bit of stability and production value. They’re compact, lightweight, portable, and they are relatively inexpensive. Over the last five years, we’ve seen a number of different camera technologies emerge from development. As a result, many companies have designed monopods for these various systems, and with so many on the market, you may purchase one that can only hold the weight of a compact camera and not a DSLR with an 85mm lens attached to it. There’s even a monopod that can double as a selfie stick — if that’s your thing.

Let’s take a look at few of the various monopods available, and which type you need, depending on your camera. I have used all of the monopods below at least once, and I still currently own the Manfrotto MM290C4 Carbon Fiber Monopod. 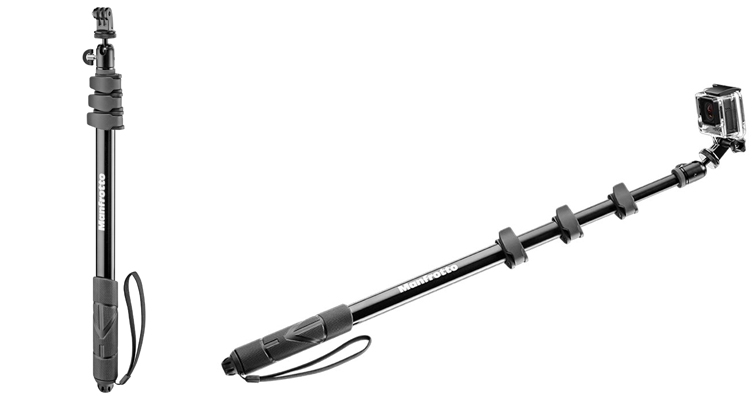 The Manfrotto Compact Xtreme 2-in-1 is a great monopod for smaller cameras such as the GoPro or Blackmagic Pocket Cinema Camera. It weighs just 320g and can reach a maximum height of 131cm. With a steady hand, you can get a stable recording with a small camera very easily. However, even though the maximum load of this monopod is 1kg, I found when attempting to test this monopod with a Gh4 coupled with a 50mm and ND filter (which at an estimate weighs around 950g) that it felt a little too top-heavy.

While the monopod has a 1/4″ thread, it also comes with a GoPro adapter, so you don’t to have to acquire one if you’re purchasing this monopod for a GoPro. Since the monopod has a hand strap at the rear of the pole, you can quickly switch from a “selfie” recording angle to a capturing a landscape scene in seconds.

For bonus merit, this monopod works well with the TwistGrip Universal Smartphone Clamp. Just attach the clamp to the 1/4″ thread, and you now have a professional selfie-stick/monopod for your smartphone. 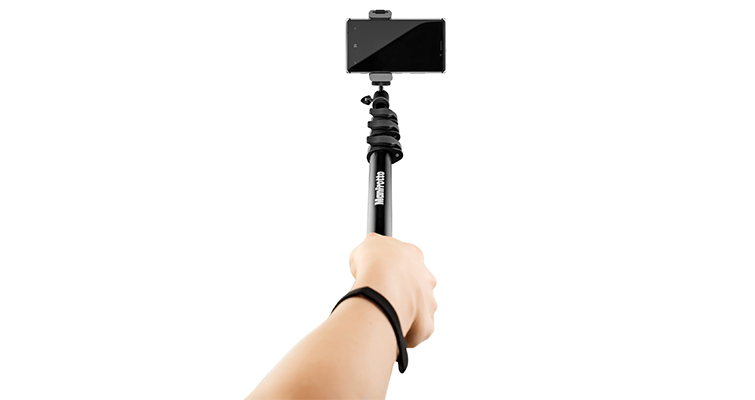 If you’re traveling with a mirrorless camera such as the Sony A7s II or a DSLR such as a Canon 5dMkIII, the following monopods are great choices.

The Manfrotto MM290C4 Carbon Fiber Monopod is a lightweight professional monopod that is perfect for turning that quick, whimsical shot into beautiful, steady footage. It can extend to 151cm and has a max load of 5kg, which will support the heaviest DSLR and lens kit. At 49cm tall, it just fits into the hand luggage category. So if you’re a traveler who likes their equipment all in one bag, you don’t have to worry with this monopod. 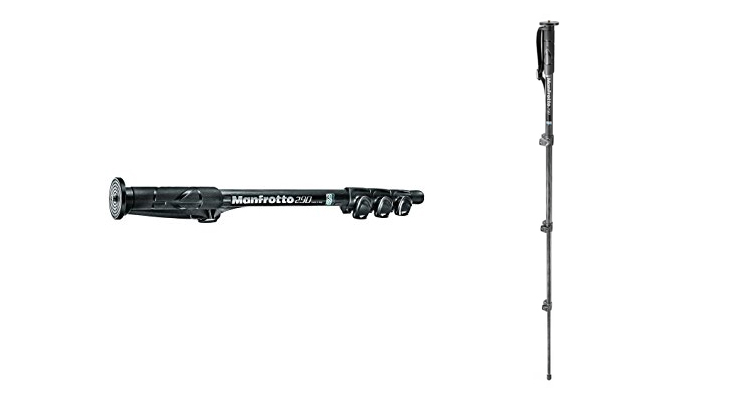 I love the MM290C4 because of its versatility when getting from point A to point B. It’s light, sturdy, and reliable.

However, if you’re not worried about the minimum fold height and want something that offers even more stability, you can look at a monopod that has a tri-stand, such as the Vanguard VEO AM-264TR Aluminum Monopod.

This monopod has a maximum height of 163cm and a load capacity of 6kg. Its foldaway height is 56.5cm, which puts it out of hand luggage category by 0.5 or 1.5cm depending on the airline you travel with.

However, this is offset by two amazing features: the tri-stand and the ball joint. The tri-stand allows the user to get more stability than a single rubber mount of a standard monopod. When filming in a windy location, for example, the three feet really help you fight the environment. If you’re shooting guerrilla, the monopod still has a rubber floor mount, so you don’t have to spend time locking out the tri-stand every time you want to use the monopod. 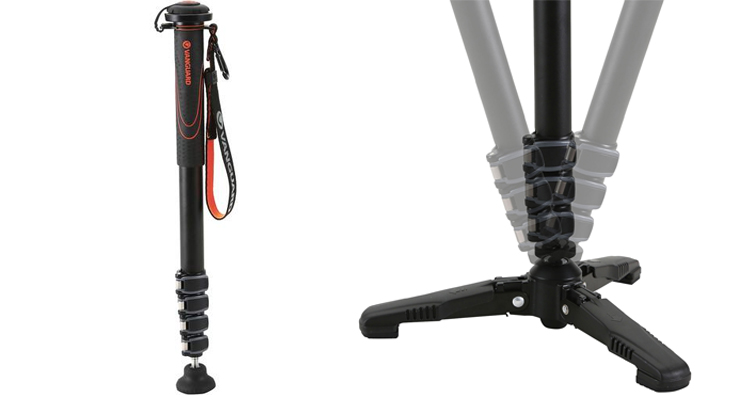 The second great feature is the ball mount; this allows you to tilt the monopod left to right, or forward and backward, which will open up a lot more creative options when filming. 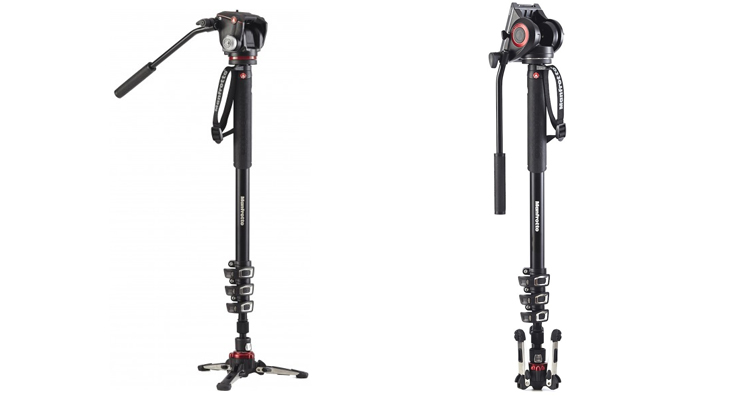 The monopods listed above are primarily for photographers. However, it just so happens that DSLRs now have amazing video recording capabilities. If you are looking to incorporate a monopod into your filmmaking, however, don’t worry. There are monopods specifically designed for the DSLR video shooter. They are more durable, they can handle heavier loads, and they can also reach higher.

In the case of the Manfrotto XPRO 4 Section Video Monopod (with 2-Way Head + FLUIDTECH Base), it has a maximum height of 203cm. While these monopods aren’t as compact as the Manfrotto Compact Xtreme 2-in-1, they still reign supreme compared to carrying a heavy video tripod through a busy city. For example, you could easily use the XPRO at a music festival while taking up little to no ground space. (A tripod in that situation would be very cumbersome.)

The primary feature of a video monopod is a fluid head. When paired with the three retractable feet, you can record beautiful, stable footage that many viewers will think you captured on a tripod. (If you’re filming with a camera such as the Gh5 at 4k, you can also warp stabilize any additional shake in the video.)

As you might imagine, a video monopod weighs a lot more than your standard photography monopod. The XPRO weighs just under 2kg, and at a minimum height of 78cm, it’s not the ideal monopod to use if you’re backpacking through eastern Asia. It is, however, a great monopod to use when you have a hotel or hostel you can return to and store your equipment.

Once you have chosen your monopod, be sure to check out Cinecom.net’s 5 creative camera TIPS and TRICKS.

Which monopod do you prefer for DSLR videography? Let us know in the comments.