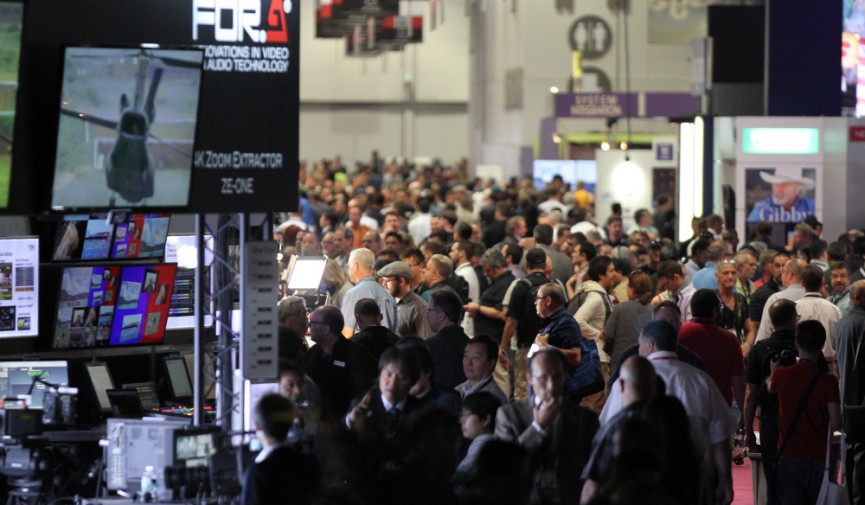 It was a big week in Vegas with tons of exciting gear and software announcements. Make sure you didn’t miss anything with this handy NAB 2015 roundup.

Unfortunately, NAB 2015 has come to a close. So, while all the major camera companies are taking down their booths, we thought it might be helpful to spotlight the most important announcements with this NAB 2015 roundup. Let’s begin!

As one of the biggest announcements of NAB 2015, the Blackmagic URSA Mini is a welcomed addition to Blackmagic’s ever-growing line of cameras. The URSA packs 15 stops of dynamic range into a super 35mm sensor. The camera comes with a flip out touch screen and can shoot up to 4.6K with optional global or rolling shutter. Definitely a camera to consider buying after we see some test footage.

To appeal to the drone lovers of the world, Blackmagic also unveiled the Blackmagic Micro Cinema Camera. It’s specially designed to be small in size and weight. With 13 stops of dynamic range and a 16mm sensor, the camera looks to bring cinematic quality video to drone videos very soon. The camera can also be controlled remotely.

With a sleek carbon fiber design, the DVX200 is the Cadillac of camcorders. Designed with professionals in mind, this 4K camcorder has built-in ND filters, iris rings, and 2 XLR audio ports. Unfortunately, the camera has a fixed lens, but with a 13X zoom, the DVX200 has almost every desirable focal length covered. No word on the release date, but if you like having all of your equipment in one place, the DVX200 might be the camera for you.

The long-anticipated C300 Mark II was announced at NAB 2015 and the specs are incredible. With 15 stops of dynamic range and up to 120fps recording, this 4K camera is going to be amazing. The only problem is the price point. With a base model price tag of $16,000, the C300 is quite the financial commitment.

JVC’s highly-adaptable 4K camcorder, the LS300, has received a price drop down to $4,000. This camera packs quite a punch with 2 XLR ports, SD card slots, and of course 4K video recording. While it may not have a sleek design like the DVX200, its specs are very comparable.

Everybody’s favorite drone company announced their latest drone at NAB 2015, the DJI Phantom 3. The Phantom 3 comes in two flavors: Advanced and Professional. The only difference being that the Professional drone has a built-in 4K camera. Both drones can be controlled from up to 1.2 miles away.

With 2 computers built-in, the Solo Smart Drone is claiming to be the first “smart” drone in the world. The drone, built for use with GoPro, has a few extremely advanced features, including the ability to move between a virtual zipline in the sky, orbit around a fixed point, and pull out to place your subject in the center of a large environment.

The new Freefly ALTA is a revolutionary drone that allows users to mount the camera to the top or bottom of the drone as desired. The drone also features 6 blades instead of 4 for added stability. The Freefly ALTA can carry cameras that weigh up to 15lbs.

The Freefly MIMIC is one of the most impressive products to come out of NAB 2015. Essentially, the MIMIC gives users the ability to control MOVI movements from a separate MIMIC Device.  So one person can hold the MOVI device while the other controls the movement. If this device turns out to have low-latency, it could radically change the entire stabilization industry.

At half the weight and a fraction of the price, the DJI Ronin-M serves as a welcome alternative to the already awesome original Ronin. The Ronin-M is designed to work with small to medium size cameras, up to 8lbs. The entire rig can also be condensed to fit into most backpacks.

GoPro is trying to target professional broadcasters with their latest HEROCast announcement. HEROCast is essentially a low-latency broadcasting device that an be attached to a GoPro for live-stream. GoPro states that the device is the smallest professional broadcast device in the world. However, for such a small device, the HEROCast boasts a pretty impressive price tag.

SmallHD wowed crowds at NAB 2015 with their 502 + Sidewinder announcement. Essentially the combination is both a viewfinder and an external reference monitor. Users can either view the 502 reference monitor to monitor colors with extreme accuracy or attach the Sidefinder to make the combination an EVF. The combo can be easily attached to professional cameras like ARRI and RED via external accessories.

13. Atomos Shogun Gets an Update and a Little Brother

Everyone’s favorite 4K monitor/recorder, the Atomos Shogun, will receive a new update. The Shogun is getting an anamorphic de-squeezing feature that should allow users to playback their anamorphic footage the way it was meant to be viewed. This is great news for Panasonic users, as the Panasonic GH4 has just recently received an anamorphic update. Users now have the option to record RAW Cinema DNG, ProRes, or DNxHR directly to their Shogun. Other minor updates include expanded RAW compatibility with Sony, Canon, Arri and AJA, Cinema 4K and 2K DCI support, and 3D LUTs on output and in recording.

Adobe released a ton of new features for the Creative Cloud just in time for NAB 2015. There are many amazing features to talk about, but the most important is the inclusion of a new Lumetri color panel in Premiere Pro. The panel will allow users to color grade using a Lightroom-like interface.

Apple’s update to their professional video applications mainly focused on the ability to create 3D objects directly in FCPX. Users can now make 3D text and basic objects in FCPX and adjust various parameters like lighting and texture. Motion also received a few updates to its 3D interface. You can read more on the announcement on our blog.

DaVinci Resolve is due to get a big update with the unveil of DaVinci Resolve 12. Notable enhancements include an updated user interface, multi-cam editing, and enhanced color grading tools. What other features do you want to see in DaVinci Resolve? Let us hear about them in the comments below.

19. Fusion is Coming to Mac

Fusion, the high-end compositing software, is now coming to Mac. Last year, Blackmagic announced that the previously expensive software could be downloaded for free, which was great news for PC owners – but not-so-great for Mac users. We can expect to see Fusion for Mac available later this year.

In a surprise announcement from Sony, we’re going to be seeing a series of new editing and file management software in the near future. Catalyst Browse, Edit, and Prepare will soon allow users to organize their video files and perform basic editing functions in a sleek new redesign. Sony Vegas users don’t panic, they aren’t killing Vegas – at least not yet. This software is meant to be an alternative. We’ll be interested to see how practical this software is once it hits the market. You can read more about Catalyst on Sony’s website.

Want to get more in-depth information about the gear announcements listed here? Check out a few of these overview posts:

What did you think about NAB 2015? Any gear that you’re particularly excited about? Please share in the comments below.