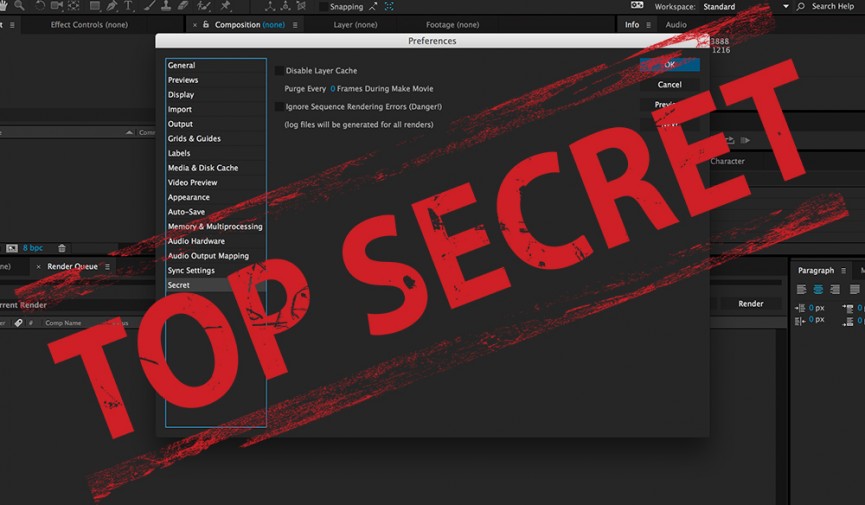 Navigating the After Effects Secret Menu

Did you know that After Effects has a ‘secret menu’? In this post we’ll show you how to access this little known menu and modify it to fit your needs.

Even if you are a skilled After Effects veteran you might be surprised to find out that there is a secret preference menu inside of AE.

There are quite a few hidden treats inside of After Effects including a secret project, a mysterious sheep sound effect, and the cryptic Mask Embiggen effect. However, the only secret that actually serves a useful purpose is the secret menu. Let’s dive in…

While holding down “Shift” navigate to After Effects>Preferences>General. Click on ‘General’.

Release the Shift key. You will now see the normal preferences with a new ‘secret’ category at the bottom of the Settings menu. Simply click on this ‘Secret’ category.

What does the After Effects Secret Menu do?

The settings are somewhat cryptic so lets break each one down….

When you RAM preview, After Effects not only renders out a preview-able video, but it also renders out information about each individual layer in the scene onto your memory (RAM). This is helpful because if you end up changing one layer and rendering again, theoretically it shouldn’t take as long.

By selecting the checkbox next to Disable Layer Cache you are telling After Effects not to render out the information from each individual layer. This will lighten up your ongoing RAM load, but will result in each render taking longer (AE must rerender everything). It’s only advised to Disable Layer Cache if you’re working on a computer without a lot of RAM memory.

Purging is the process of emptying your memory cache. By purging your RAM you will free up space for After Effects to do more rendering. By default, the ‘Purge Every X Frames During Make Movie’ is set to 0 (meaning it never happens), but if you move the slider you can change it to match your needs.

For example, if you move your setting to 10, After Effects will empty the memory cache every time 10 frames are rendered. If your renders keep crashing you might want to start at a higher number like 15 and work your way closer to 1.

As the name implies, when you have the ‘Ignore Sequence Rendering Errors’ box checked After Effects will disregard errors during the rendering process. This can be helpful in some instances, like rendering image sequences, but it’s generally not a great idea to have this box checked. You can severely damage your computer’s hard drive, memory, and CPU by bypassing render errors.

If you have any other questions regarding disk cache or rendering in After Effects, check out a few of the following resources:

Do you use any of these ‘secret’ After Effects settings? Let us know in the comments below!