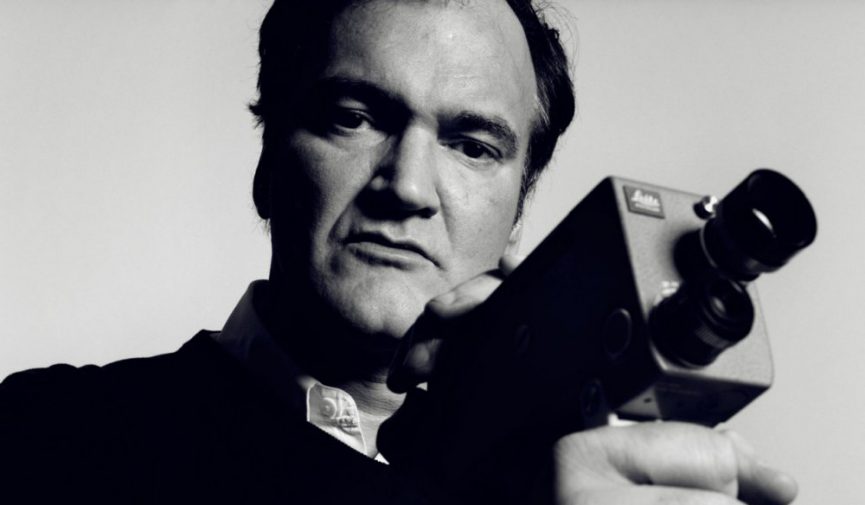 10 Quotes from Quentin Tarantino on Filmmaking

Quentin Tarantino is one of the most influential directors in film history. For those looking to follow in his footsteps, here are ten of his best quotes on filmmaking.

Last week at Adobe Max, Quentin Tarantino reaffirmed his declaration to retire after completing ten movies. For those keeping track, he’s currently standing at eight (he doesn’t count Death Proof). If he stays true to his promise, that leaves one of the most successful, most influential, and, at times, most controversial directors with only two films left to make.

A true cinephile who made his rise in the 1990s with Reservoir Dogs and cemented himself into mainstream cinema with Pulp Fiction, Tarantino has been a highly visible film advocate who rarely shies away from interviews and the limelight.

His rags-to-riches success story from video store clerk to big-budget director has been very well documented and recanted throughout the years. As such, for those seeking advice on how to follow in his filmmaking footsteps, here are some of his most important quotes for aspiring filmmakers.

Filmmaking Can Be a Democratic Process 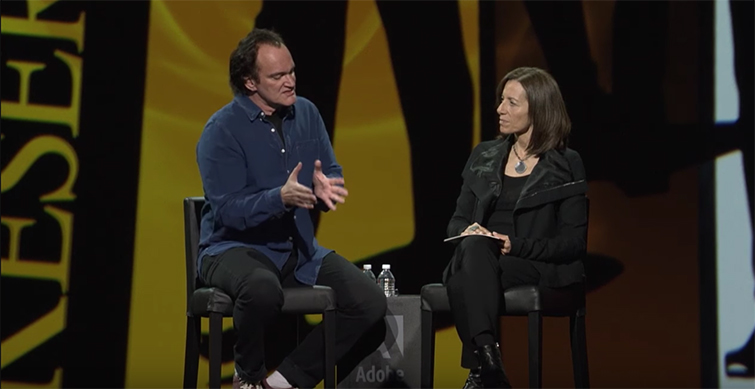 Speaking at Adobe Max, Tarantino talked in depth on how digital technology is drastically changing the filmmaking process from when he started out. While he’s always been a film-stock preservationist, he’s grown to appreciate the accessibility of digital filmmaking and how it opens filmmaking doors for those who haven’t had access in the past.

There’s a parenthetical downside to it that is completely dwarfed by the upside. The upside that exists today, filmmaking can be a democratic process. In which other people, other than rich white men, can make movies.

Have a Passion and Don’t Give Up 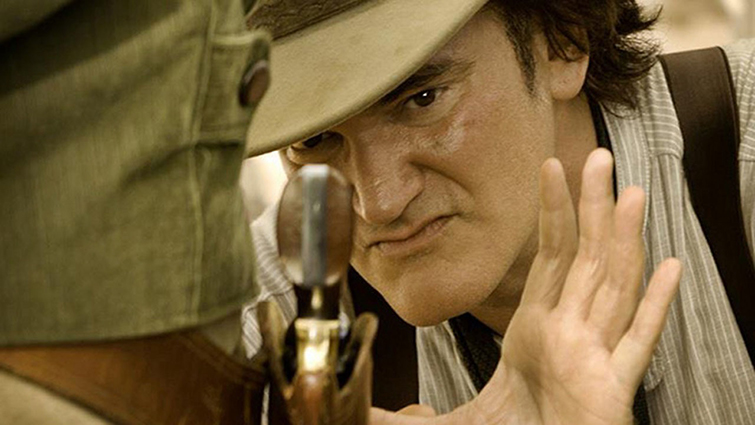 Tarantino has made many mentions of his failed first foray into filmmaking. While, like many popular directors, he may not have attended film school, his first film served as his de facto film school curriculum. Needless to say, it takes lots and lots of passion to stay with it and make it through.

If you have the passion to do it, and you do it and it doesn’t work out — I worked for 3 years on a 16mm movie that became nothing but guitar picks. And I was very disappointed when I realized it wasn’t any good. But it was my film school — and I actually got away really cheap. When it was all over I knew how to make a movie.

Let Your Subconscious Guide You

In the interview below with the Village Voice, Tarantino talks about his creative process and his focus on the subconscious. Tarantino’s works are all very character-driven stories. As such, he puts a lot of effort into making them visceral. They are all deeply connected to his subconscious.

Oh, very much so. Most of it should be subconscious, if the work is coming from a special place. If I’m thinking and maneuvering that pen around, then that’s me doing it. I really should let the characters take it. But the characters are different facets of me, or maybe they’re not me, but they are coming from me. So when they take it, that’s just me letting my subconscious rip. — Village Voice

Be a Sponge of Stories

As with most great filmmakers, Tarantino considers himself a writer first and foremost. When working on a film, the original idea and the story should be strong enough to guide the rest of production. Tarantino’s films are so successful in part to his endless dedication to the writing process and how he uses the writer’s mindset to view the stories around him.

I am a writer. That’s what I do. It’s a writer’s job not just to write about himself but to look at the rest of humanity and explore it — other people’s way of talking, the phrases they use. And my head is a sponge. I listen to what everyone says, I watch little idiosyncratic behavior; people tell me a joke, and I remember it. People tell me an interesting story in their life, and I remember it. — The Talks

Let Your Film Be Interactive 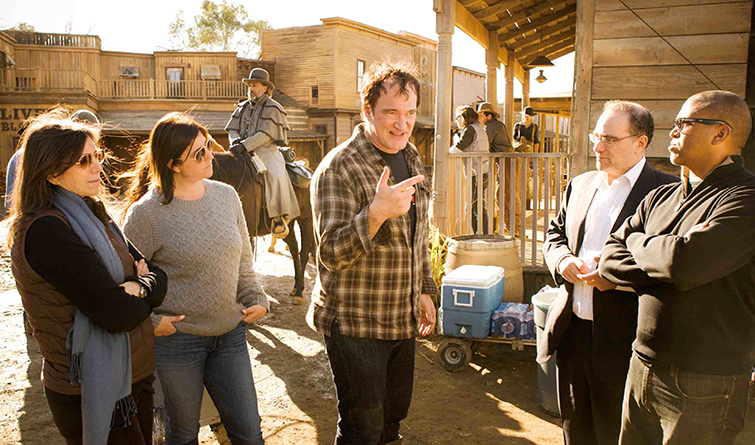 Image via The Playlist

Tarantino has been quite lucky in some regards to have consistently worked with all-star casts. While he can be considered a control freak on set (more on that later), he is also able to encourage his actors to add to their roles as he works to bring out the best in them and the project.

Inglourious Basterds and Django Unchained, you can read almost as a piece of literature, but I still had to figure them out [before shooting]. It’s not for sure that I’m going to pull them off. There is a “finding it” in the course of making it. But with Hateful Eight, it was right there. I mean, if I had those actors and we did it in a little theater on Santa Monica Boulevard, 99 seats, it would kill, it would be terrific. — Hollywood Reporter

It’s About the Characters Over the Actors

By the same token, it’s important to note that it takes great actors to realize that it isn’t about them — it’s about the character. When you focus and put as much into your characters as Tarantino does, it gives the actors ample material to further bring those characters to life.

I’ve been making movies for 20 years, and as great as some of those decisions I made in the first ten years were, I probably wouldn’t make them again. What I mean is, I really liked the scripts I wrote, and I really liked my characters, but I wasn’t over-enamored, and I wasn’t that precious about them. Back then, I got much more excited by cool casting. I liked the idea of taking an actor I’ve always liked but wasn’t being used much anymore and putting him in the movie and showing people what he could do. But I don’t feel that way anymore. Now it’s all about my characters. I actually think my characters are going to be one of my biggest legacies after I’m gone. So I have no obligation whatsoever other than to just cast it right. — Slash Film

Care About the Movie You’re Making

In a 1994 interview with Robert Ebert, the famous film critic described Tarantino as a “joyous, arm-waving, head-shaking, table-pounding cascade of cinematic theory and big plans.” Ebert’s early reviews were spot on, as Tarantino’s enthusiasm and cinema knowledge has led him to make successful film after successful film. If not his signature trait, Tarantino’s passion and enthusiasm for every project he works on is paramount to his success.

My integrity will always be the same. I mean, I might fail. But I find it almost impossible to believe that I’ll ever do a movie for the wrong reasons because — it’s just too hard to make a movie! It takes too long! It’s a year of your life! And I can’t believe I’ll ever do something completely for money because I’m making enough money now. I never want my overhead to get so big that I gotta do stuff I don’t care about. — Roger Ebert

It’s Okay to Rely on Dialogue

If there is a criticism of Tarantino’s work (besides the violence and profanity), it might be in his, at times, over-reliance on dialogue instead of action. The old film adage is “Show, don’t tell,” however Tarantino’s dialogue in itself would hardly be described as “telling.” It’s more often meandering and off-topic, but is always so riveting that it can drive the story and capture that audience’s attention.

It’s not only dialogue, it’s also mood, situation and mise en scene. But I have no problem relying on dialogue. It’s one of the reasons I can direct my material better than anyone else, because I have a confidence in my material that no one else would. — Timeout London

Be the Captain of Your Ship 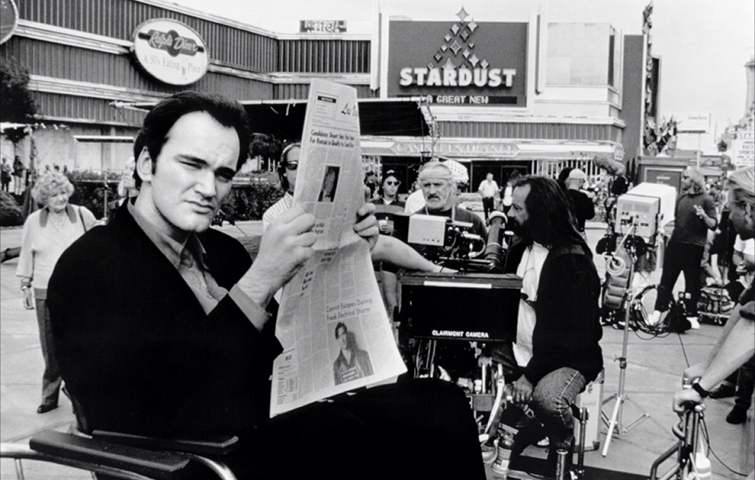 Tarantino is also notorious for how he manages his set. He has a reputation for being a bit of a hot-head and control freak, famously firing crew members on the spot for a cell phone ring. However, his job is not to be friendly — it’s to be loyal to his vision, get the most out of his actors, and to see the project through to the end.

Not Every Movie Needs to Be Made

Ending back where we started. In his most recent interview at Adobe Max, Tarantino was at his unapologetic, highly animated and obviously passionate best. In his meandering conversation, he shows how he’s grown and is able to look back at his filmography with sympathy and admiration. With his ten film limit, he likens his legacy to those of famous directors before him. However, as is true to his form, he points out that not everyone can be the next Tarantino and that every film does not, in fact, need to be made.

When you had to go and convince people and get the money to make a movie. There [are] some hurdles that aren’t bad to go through. There was a filtering out process. Not every movie needs to be made. Not every movie should be made.

Maybe Tarantino’s advice and legacy will precede him as his career winds down for being the last of a great generation before a tidal wave of mediocracy overtook the industry. Or maybe, in his own words, he’s just laying out an expletive-filled challenged to the next generation of filmmakers to step up.

Yeah, two more. That’s it. And then drop the mic. Boom. Tell everybody match that sh*t!

What’s your favorite filmmaking quote? Let us know in the comments.