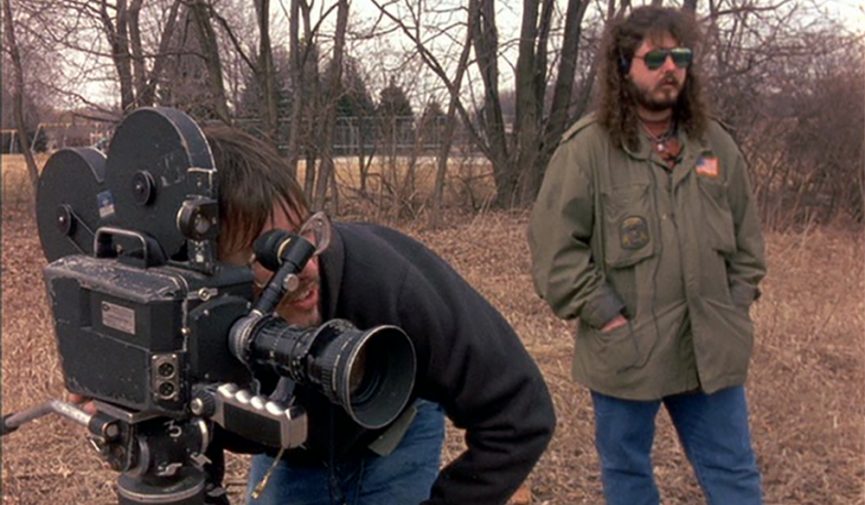 The 7 Best Films About Filmmaking

Skip film school and watch these seven films about the art of filmmaking. They’re entertaining, educational, and essential.

If you’re interested in becoming a filmmaker, you’ve got to surround yourself with the culture. You’ve got to create. You’ve got to spend time on set. You can also watch how other filmmakers do their job. These seven movies are perfect for that. Let’s explore how filmmakers making films about filmmaking can teach you how to make your own films.

What to Watch For: Basics of cinematography and the beginning of self-aware filmmaking.

The original film-within-a-film film, this Russian classic is a film-school textbook staple for its montage and mise en scène innovations in the late 1920s.

Filmed over a three year period, the film was an experimental look into daily urban life inside a typical Russian city. Of its many groundbreaking techniques (including double exposure, slow motion and split screens), its self-aware narrative gave iconic insight into the mind of a filmmaker.

What to Watch For: Introspectiveness within yourself and innovation within your film.

The lines of reality and fiction are blurred (along with the lines of documentary and docu-fiction) as David Holzman struggles and searches for meaning in his film’s existence (see his quote below).

What to Watch For: The compromises a filmmaker must make on a film set and with him or herself.

François Truffaut’s look into his filmmaking process is one part behind-the-scenes featurette and two parts introspective review of who he is and why he’s a filmmaker. The film features the frustrations faced by a filmmaker as they must deal with everything from actor relationships to uncooperative animals on set. The facade of control is withdrawn as Truffaut shows how the filmmaking process is a series of compromises to simply get a film finished.

The film’s ramshackle-style was homaged by the Truffaut devotee Wes Anderson for an American Express commercial that shows how the process is pretty much the same for everyone.

What to Watch For: How battle through the madness of filmmaking and being a filmmaker.

Technically speaking, Hearts of Darkness is the behind-the-scenes documentary about the making of Francis Ford Coppola’s universally acclaimed Apocalypse Now. However, viewed within itself, Hearts of Darkness is considered one of the greatest films about filmmaking, as it shows the sheer madness behind the filmmakers making the film.

Filmed on location in the Philippines, where a typhoon closed down production and everything that could have gone wrong went wrong, it’s amazing that the filmmakers were able to just stay alive, much less make a film about it.

What to Watch For: Tribulations of low-budget filmmaking and determination to never give up.

What to Watch For: How to embrace both failure and success.

Best Worst Movie is perhaps the best film made about the worst filmmaking ever. The film tells the story of Troll 2, which is widely considered in contention for the worst film of all time. However, the film about the film picks up two decades later and follows how the film’s makers have coped with their failures and, ironically, learned to embrace its success as fans find joy in its awfulness.

What to Watch For: The future of film as told by filmmakers.

From noted filmmaker Keanu Reeves, Side by Side is an exploration into the budding divide between digital filmmaking and classic film filmmaking. With interviews featuring everyone from David Lynch to James Cameron to Martin Scorsese, the film’s behind-the-scenes peeks into the minds of filmmakers offer terrific insight and inspiration for how filmmakers see the future of film — all through a film.

What’s your favorite film about filmmaking? Let us know in the comments.