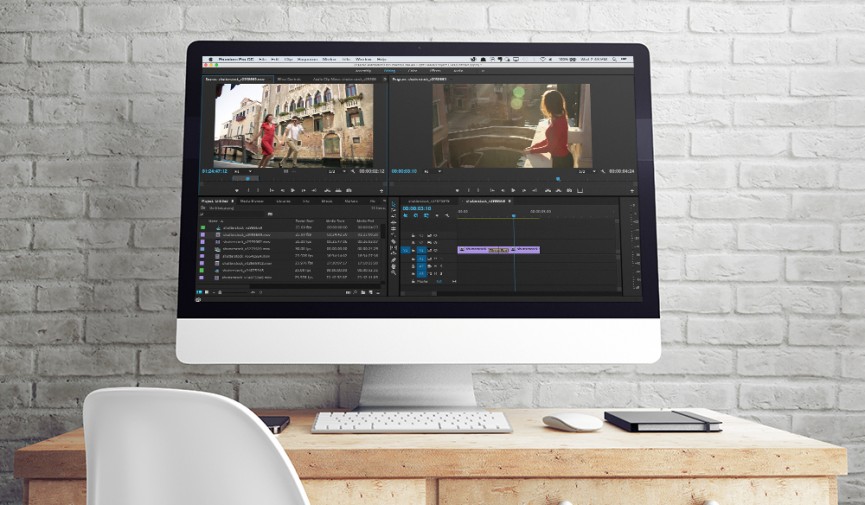 There’s more to video transitions than simply moving between scenes. Let’s look at the reasons behind the cuts.

In video editing, each cut and every transition holds a deeper meaning. Let’s take a look at the hidden narratives behind four of the most common video editing transitions.

This example of fade to black symbolizes implied action between happiness and sadness.

A fade to black eases the audience’s emotions into the next scene or the end credits. A fade symbolizes a passage of time. It would be confusing to an audience if you were to fade to black and then fade up a scene that is chronologically no different than the scene before it.

Fade to blacks imply action, depending on the clips before and after the transition. If you were to fade to black in a scene, it would imply that the narrative tension or emotions have transitioned to the next, even if they aren’t easily apparent in the next scene. In the example above, we first see a happy couple. Next, a girl looking over the balcony of her room. Despite not knowing anything else about this story, we can imply that she is reflecting on the happiness she experienced in the previous scene.

Gif from Jacob T. Swinney’s ‘Fade to White’ (seen below)

Where a fade to black symbolizes completion, a fade to white does the exact opposite. A fade to white tells the audience that the hero’s journey isn’t quite over. Despite all of the visual information on screen telling you the action is completed, there is still something left. This is why you will often see a fade to white at the end of a dramatic film with an ambiguous ending.

A fade to white gives the audience a perception of hope. Perhaps the hero did change in the end? Maybe the girl didn’t really die? A fade to white tells us that, despite a bleak or undesirable ending, a positive outcome was still accomplished.

The example above from Black Swan is a symbol of hope or happiness. Nina, after becoming the dark swan she feared, has now transitioned into the heavenly realm which she fantasized about. The character, despite the forces surrounding her, has achieved the beautiful result she imagined. In a way, the fade to white is dissonant to her surroundings.

In this fantastic video roundup from Jacob T. Swinney, we see quite a few popular examples of fade to white in popular film. In the description Jacob writes “fades to white are often used to express disorientation and euphoria, among many other similar sensations.”

Dissolves have admittedly been on the decline over recent years. While you will find lots of instances of cross dissolves in classic cinema, modern filmmakers don’t tend to use them as often. A cross dissolve symbolizes a passage from one scene to the next. This could be a passage of time or simply a passage from exterior to interior. Cross dissolves symbolize overlapping ideas between scenes.

The duration of a dissolve is directly related the the implied duration between clips. A quick dissolve might symbolize only a few minutes, but a long dissolve could symbolize years. It’s very rare for a film to use a quick one-second dissolve to symbolize a long passage of time.

In the example above, we can see two scenes connected by a cross dissolve. From the dissolve, the audience can infer that the building seen in the second clip is the same building being designed in the first clip. A simple cut might have not drawn the same conclusion.

This example from Citizen Kane highlights the symbolic change between these two scenes.

While all of the transitions on this list stand for a passage of time, a wipe implies continued action that is unresolved. A wipe works well in a film that is full of action and movement, which is why you’ll see it throughout films like Star Wars. A great example from modern film is Edgar Wright, who uses physical objects to wipe between scenes to control the pacing.

You will typically find wipes in films with multiple storylines that are playing out in separate locations. A wipe implies tension between one shot and another. A wipe can also serve to juxtapose good and evil or light and dark. Typically the actions in Scene A of a wipe will affect the actions in Scene B and vice versa. While it does depend on the situation, a wipe can serve as a cliffhanger, implying to the audience that they will be returning to the scene once the parallel story has moved forward.

This amazing roundup from realityoccasionally shows us a few of the wipes from the Star Wars film franchise.

Do you need transitions for your project? We’ve got you covered with this pack of 200+ transitions and assets!

What is your favorite type of editing transition? Share in the comments below.