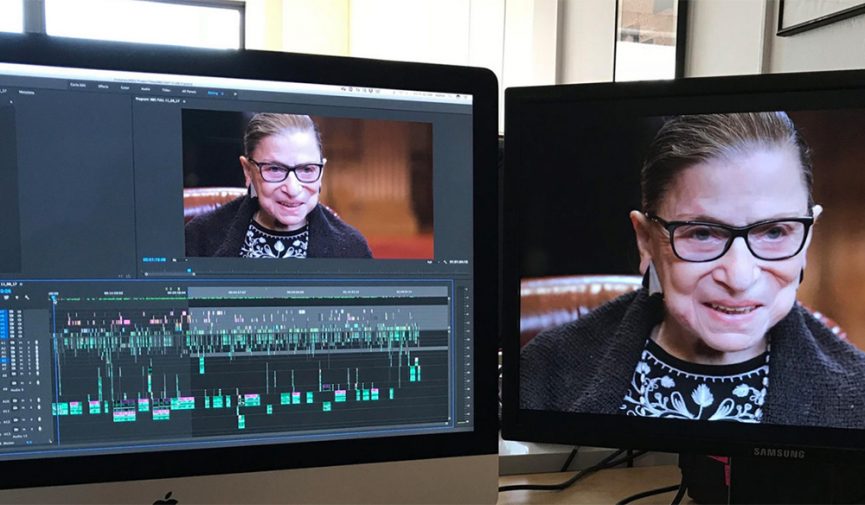 Tips from the Team Behind the Ruth Bader Ginsberg Sundance Documentary

The team behind RGB shares insights into how they built their all-female leadership team — and breaking into the documentary-editing industry.

In 1993, Ruth Bader Ginsburg became the second female justice to be appointed to the Supreme Court of the United States (the first being Sandra Day O’Connor), a seat she still holds today. At the Sundance Film Festival this year, RGB premiered — a documentary film that explores Justice Ginsburg’s life and career — directed, produced, shot, and edited by an all-female leadership team.

In a conversation with Adobe’s blog, filmmakers Julie Cohen and Betsy West, cinematographer Claudia Raschke, film editor Carla Gutierrez, associate producer Nadine Natour, and associate editor Grace Mendenhal sat down to chat about how they put their team together, and they shared some tips on collaborating and editing a project inspired by Justice Ginsburg herself.

Bringing the Team Together

We made a spreadsheet of talented women cinematographers and editors and started asking around. Nadine has been working for me for four years on various projects, so that was a natural progression for her to work on this project, too. Then Grace came along. We also made a list of other people we needed. —Julie Cohen

Cohen and West met while working on a digital archive about the modern women’s movement that interviewed Justice Ginsburg. From there, they realized that many of her millennial fans didn’t know the full story of how Justice Ginsburg rose to her position, so Cohen and West put together a treatment and pitched it to CNN Films, who agreed to take on the project and let them assemble their team — their way.

I have been described as opinionated in the past. As an editor, you are hired specifically to give your opinion. But it’s different with women directors or female crews — instead of “opinionated,” the word used to describe my collaboration was ‘confident.’ I like that better. —Carla Gutierrez

When filmmakers like West were breaking into the industry and starting their careers anytime between the ’70s and the ’90s, there were few women involved, and it could often feel like there wasn’t an even playing field. On their all-female RGB team, however, as Raschke describes it, they “listen to each other because we all are filled with mutual respect because we already know that you know what you’re talking about.” The focus is on appreciating the best you can do, then enabling each other to do the same.

Working with Your Subject 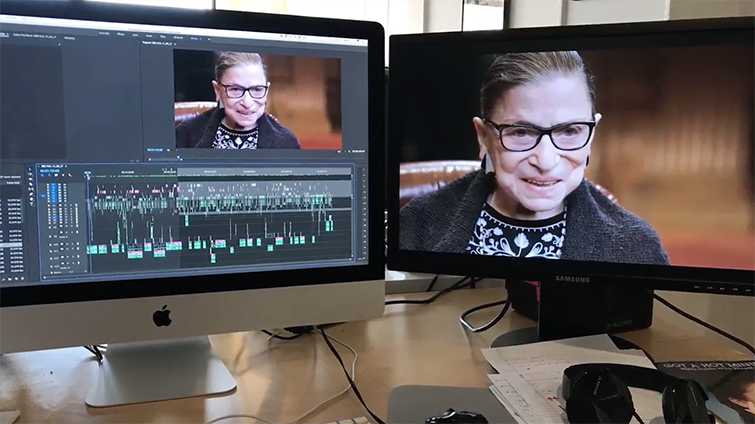 It was amazing and intimidating. She’s tiny, but a giant, and you feel that in her presence. She’s not somebody who just jumps right into a conversation. She has a very deliberate pace. When you ask her a question, she stops and thinks, and considers everything. She also has an encyclopedic memory for every case she’s argued or heard. If you tell her about a case from 1973 and get a detail wrong, she’ll correct you. She has a great sense of humor and she’s very witty. —Julie Cohen

Justice Ginsburg has been a true patriot of civil rights throughout her lifetime — not just during her time on the Supreme Court. Raschke describes Justice Ginsburg as holding up the flag of equality, which the filmmakers took as an example when working with her (and each other): “these amazing women who have withstood so many challenges in their own careers, and here’s RBG, who’s a leader and hero to us all.”

Breaking into the Industry

The most important qualities to succeed in this industry are persistence and confidence, and those are often hard for women to cultivate. But learn how to develop the confidence you need to push forward through your doubts. When I get a rejection, I always move forward by doing three new things right away. —Julie Cohen

While the filmmakers each followed their own paths into the industry, West stresses the importance of not getting discouraged or giving up. “Be like Justice Ginsburg,” she says. “Try to see your way around obstacles and see obstacles as potential opportunities.” While Gutierrez advices honing your chops on tools like Premiere Pro, she also encourages learning how to “be present in the room, ask questions, stay curious, and find mentors.” 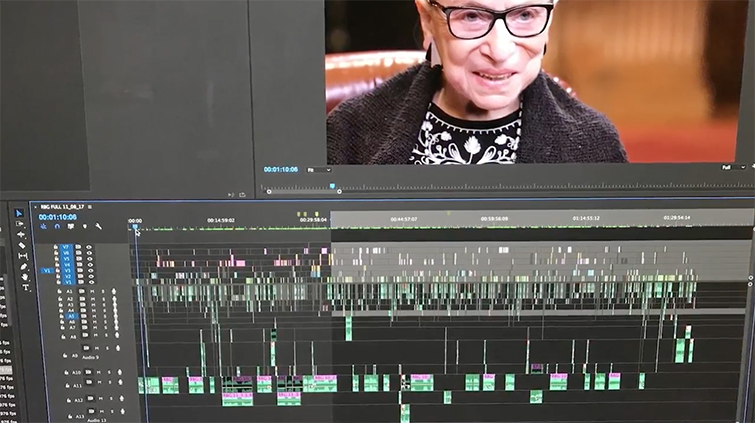 Be an expert in your craft, and that means having excellent technical skills. In this project, I started as an assistant editor, but moved into the role of associate editor in part because of my passion and dedication to learning and growing my skills, and in part because of my editing and graphics skills. It was really beneficial knowing Adobe After Effects and being fast and knowledgeable about Premiere Pro so I was able to have the time to take a stab at an edit or do some additional graphics work, after I had completed my assistant work. —Grace Mendenhal

For those looking to launch a career in editing, learning to masterfully use Adobe After Effects is a way to get a leg up, as Mendenhal learned. (She handled much of the additional graphics work on the project.) For more resources on working with After Effects (as well as increasing your Premiere Pro knowledge), check out some of these links.