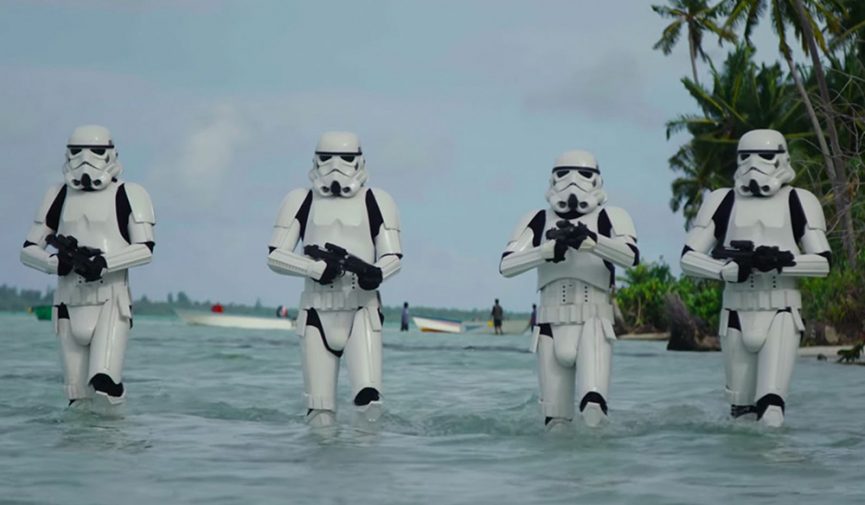 It seems more trailers than ever are featuring footage that’s not included in the final film. Is this deceitful marketing? Or does it even matter?

The release of Rogue One: A Star Wars Story was met with thunderous applause from critics and fans alike. While I’ve always enjoyed Star Wars, I’m not really a die-hard fan, though I do admire the mythos and universe George Lucas brought to life. After my viewing of Rogue One, I was almost sure the film might be pushing toward the top spot of my ranked Star Wars film list. Possibly.

Seriously. If you want to avoid spoilers, don’t scroll past this picture of K-2S0! 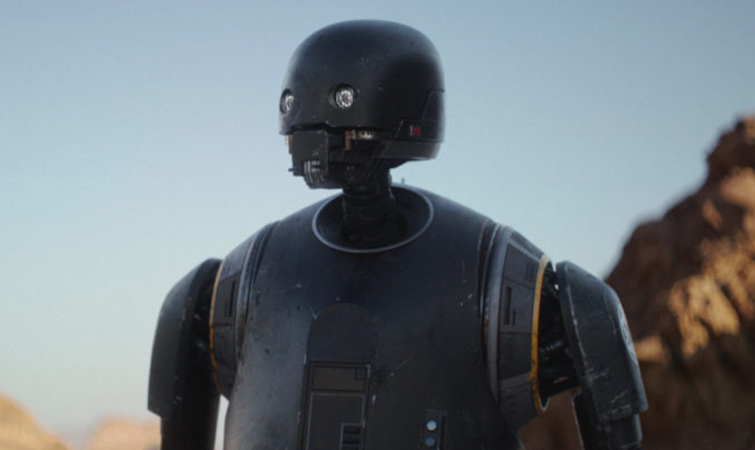 After the dust had settled, I started to think about something else, and I haven’t been able to stop thinking about it since. Where on earth were all of those cool shots and lines from the trailers? “This is a rebellion, isn’t it? I rebel.”

The Ever-Changing Nature of Trailers

Trailers are ultimately the fundamental tool to entice the public to watch a film. They can become a viral sensation (the trailer for Star Wars: The Force Awakens garnered 112 million views in only twenty-four hours), or become the cause of much controversy because they give away too much of the plot (looking at you, Batman v. Superman).

Hollywood’s approach to trailers is always evolving. Studios have to adapt because audiences eventually become familiar with the tried-and-true characteristics and trends of trailers, and familiar doesn’t sell tickets quite like groundbreaking and new. Ask yourself — when was the last time you heard the voice of the classic trailer narrator guy for a blockbuster?

If you look back to some of the trailers for films of the early 2000s, they appear like relics. Take the trailer for Star Wars: The Phantom Menace.

The YouTube comments are loaded with sentiments like, “Is this trailer really awful? Or does it seem wrong because we’ve been spoiled by some amazing trailers over the years?” and “I’ve watched this trailer multiple times now, and I still can’t fathom how people thought it looked good.” Of course, I can only imagine at the time, this trailer got people incredibly excited.

Nonetheless, despite Rogue One being a great film, a lot of cinema goers have taken to social media to voice comments on the missing footage. In fact, the first trailer is comprised almost entirely of footage that did not make the final cut.

You’ll likely remember that Rogue One had a very public reshoot. In total, over 40% of the film was reshot, and it appears most of those reworked scenes were used in the trailers. It’s not uncommon for trailers to use dialogue out of order, or to conjoin different scenes to heighten the moment. But when is it too much? When does it become deceitful?

A lot of initial reactions to the first trailer expressed great joy at this epic scene of our heroes rushing toward a fleet of AT-ATs — only to discover that this shot not exist in the film. In fact, the very scene from which the shot is taken does not exist in the movie. (Nerdy editor’s note: The walkers featured in Rogue One are actually AT-ACTs or All-Terrain Armored Cargo Transports.)

Truth in Advertising vs. Selling a Film

In 2011, a woman from Michigan filed a lawsuit against her local cinema chain and the distributor of Nicolas Winding Refn’s Drive, claiming the film advertised itself as an action-packed car-chase/race movie in the vein of The Fast and the Furious.

The trailer, to some extent, does paint that picture. It doesn’t fully show the aesthetic of Refn’s style like the Neon Demon trailer does. So, how important is it for a trailer to fully represent the finished product?

Vashi Nedomansky, a Los Angeles-based film editor and editorial consultant for films such as Deadpool and Gone Girl, created a video documenting all of the shots from the Rogue One trailers that didn’t make the film, forty-six in total. Nedomansky says;

As a film editor, I understand the marketing and have helped in creating the trailers for the ten feature films I have edited. I have also worked with several trailer houses in Los Angeles that cut the trailers that we all consume in the theaters and online. The specific skillset and mindset that an editor must adopt to live in a world of movie trailer editing is no small task. The notes from the studio, producer, director, and countless other people boggle the mind in terms of volume and contradictory requests. The trailer game is an ever-changing pursuit that tries to stay ahead of the intelligent public but must also find new ways to tease, cajole and intrigue. Get the a**es into the seats! Show scenes that aren’t in the film. Manipulate dialog and visuals to make a scene more interesting. Shift the order of shots to make it more interesting or compelling. Add music not in the film to hit an emotional beat. Use every trick in the book to make an effective trailer.

The trailer for Captain America: Civil War is a perfect recent example of this approach. At one point in the trailer, we see the two groups of colliding heroes rushing toward each other ready for battle. As viewers discovered in theaters, the actual scene included an essential component that was missing from the trailer: Spider-Man. Of course, in this instance, the web-slinger was removed to keep the audience in the dark about his presence within the film. 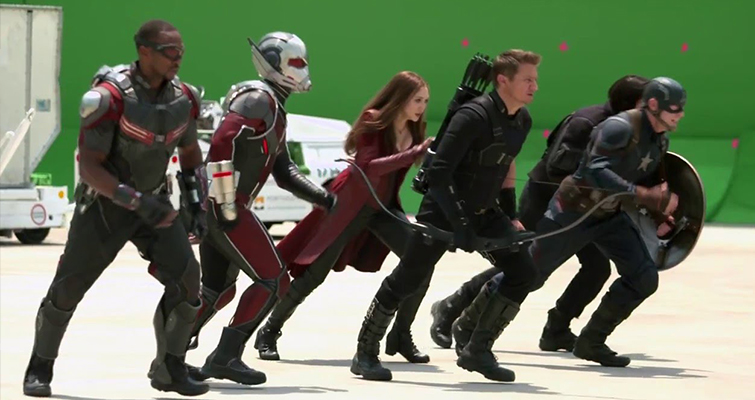 It’s important to note that this scene within Captain America: Civil War was shot entirely on a studio lot in front of a giant green screen — and this type of digitally created environment has a lot to do with footage being omitted and changed before it hits the big screen. For blockbusters, trailers are usually put out at least eight months before the release date; in the case of Star Wars: The Force Awakens, the first teaser was released nearly thirteen months before the film opened.

While most blockbuster trailers are released when the film is in post-production, some are released when the film is still shooting. In both situations, the trailer often includes incomplete VFX, as studios are under pressure to release something. Fortunately, thanks to today’s digital workflow, there’s a lot of time to enhance and change not only the visual effects, but the setting of the scene itself.

Take the following stills from The Hobbit: The Desolation of Smaug teaser trailer and from the film itself. (Images via Weta Workshop.) 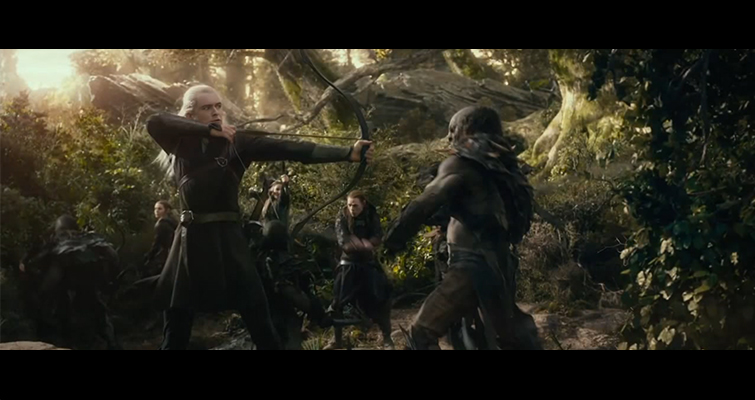 Not only has the color been altered to give the scene a darker palette, the entire location is completely different too. The scene has changed from an open area which looks to be near a cliff edge to the interior of a forest. You get bonus points if you spotted that the head of the orc was altered too.

Fans long for footage of a highly anticipated film. The studio caves, only to find fans expressing disappoint at the incomplete VFX. This might be a vicious circle that needs to come to a halt.

The Jurassic World trailer definitely received its share of scrutiny due to its lackluster VFX. The film’s director, Colin Trevorrow, said that one of the key shots of the trailer, the shot of the train passing the gate, an homage to the original’s gate shot, was created specifically for the teaser.

Again we, the audience, were teased with footage not included in the final film. Regardless of this, Jurassic World (and all of the blockbusters used as examples above) went on to smash records.

This presents us with the following question: Does it matter if the content of the trailer is different or omitted altogether, as long the story and tone of the trailer are still consistent with the film? If box office receipts are any indication, the answer is clear: No.

What are your thoughts on this? Share them in the comments below!