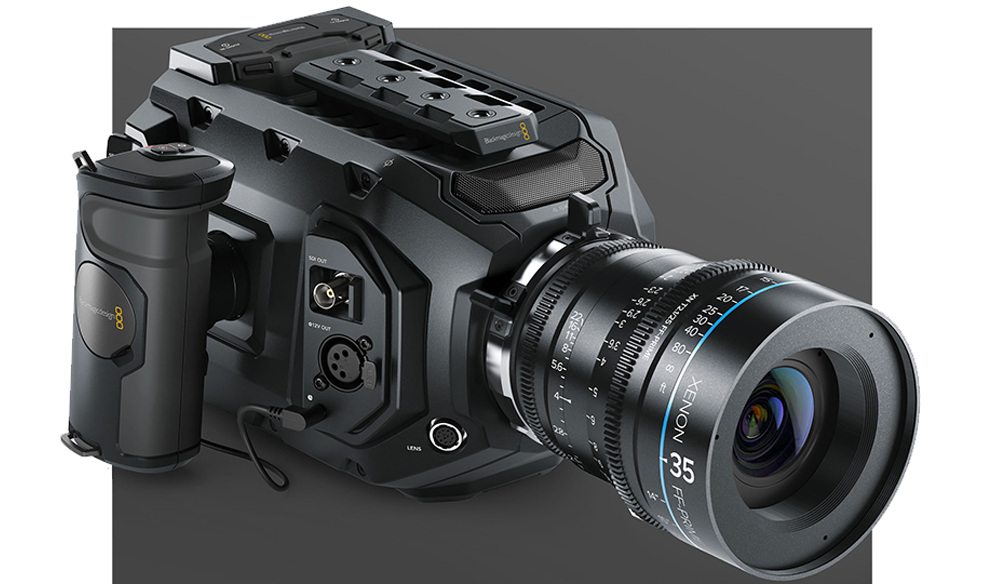 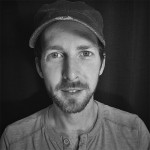 We got our hands on a Blackmagic URSA Mini 4.6K with the latest firmware. It’s an impressive overhaul, practically making it a whole new camera.

Blackmagic recently released a new 4.0 beta firmware for their Ursa Mini 4K and Ursa Mini 4.6K. With no existing legacy code from the past, the Blackmagic Camera Setup 4.0 is a complete overhaul of their operating system and user interface. Not only that, but quite a few new features that improve the overall functionality of the camera are nicely tucked in there as well. 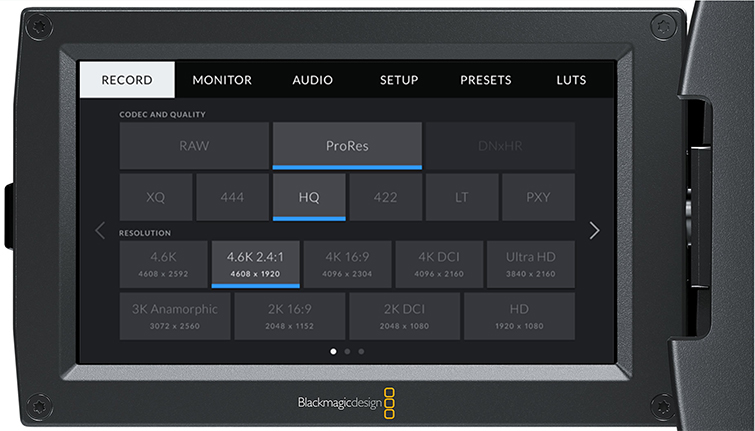 Unlike most other production cameras, there is not a list-style menu system to scroll through — only to realize that the function you wanted wasn’t even there to begin with. It seems like Blackmagic took a cue from the RED playbook and gave users the ability to see all your options at once instead of hiding things deep in a menu tree. 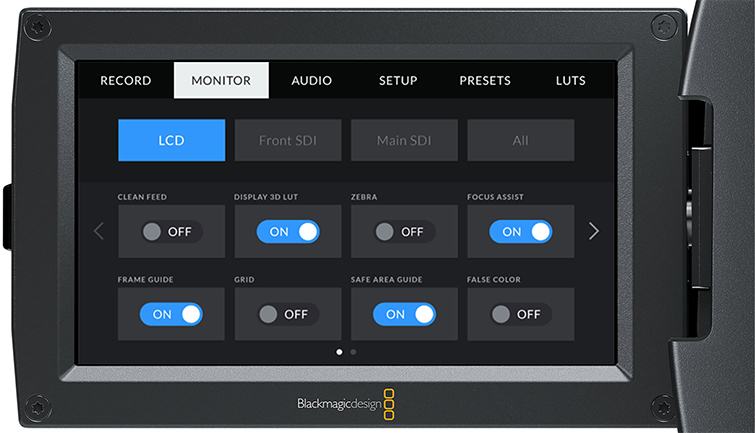 The simple swipes left and right change the page under any menu header. The ability to get to any of those headers at any time without having to retreat back to a home page makes adjusting settings like turning on a LUT or adjusting off-speed frame rate very easy to do on the fly.

There’s a familiarity to it that makes it ever so simple to understand and master. After only a few minutes playing around, I felt like I could change any setting within seconds. In live viewing mode, touching any of the essential settings like white balance, shutter, and ISO allow instant changes to those specific functions. 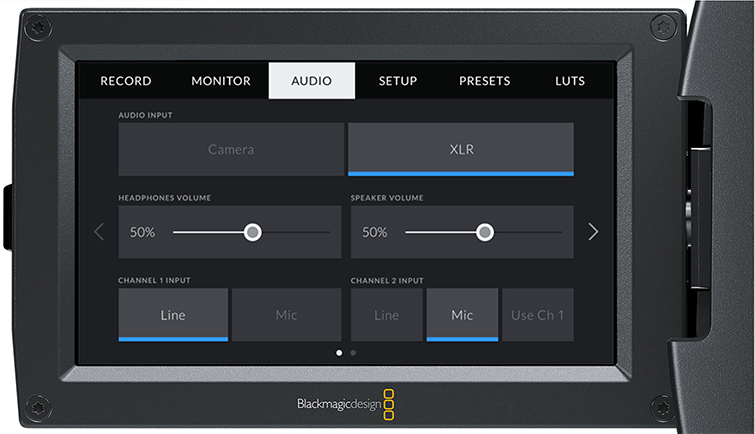 It’s worth mentioning that Blackmagic’s color control is heavily reliant upon post color work with their DaVinci Resolve software and the use of user-generated LUTs that can be loaded in via the CFAST cards. As a result, the absence of color control in camera is refreshingly simple and doesn’t overcrowd the menu system with gamma and color settings most shooters won’t ever really use.

Everything in the menu is an important function, and it’s important to note that not only did Blackmagic think about how they laid out the menu system — but what they put in there as well.

Being a beta version of any software implies that it might be a bit buggy. Booting the camera up takes too long. Playback mode often takes a few seconds too long to get out of, and it’s not easy to get to a specific point in a clip. Overall, you don’t need tiny fingers to hit any of the options with the exception of the forward, reverse, and play buttons in playback mode. Fortunately, there are also hard buttons for those functions on the physical camera itself that are much easier to use.

Swiping left and right on the touchscreen can cause unwanted changes in menu options, especially those that are adjusted via sliders. When in live-viewing mode (not in the menus), swiping left enables a screen for the input of metadata such as slate info, director and cinematographer names, and other shot-specific notes. Seems like that function could be delegated to something more useful, but that is definitely personal preference. It’s quite easy to accidentally touch the screen and land somewhere you don’t want to be like that metadata input screen. Maybe in the future Blackmagic will allow users to customize and lock certain gestures. For now, it’s totally manageable. 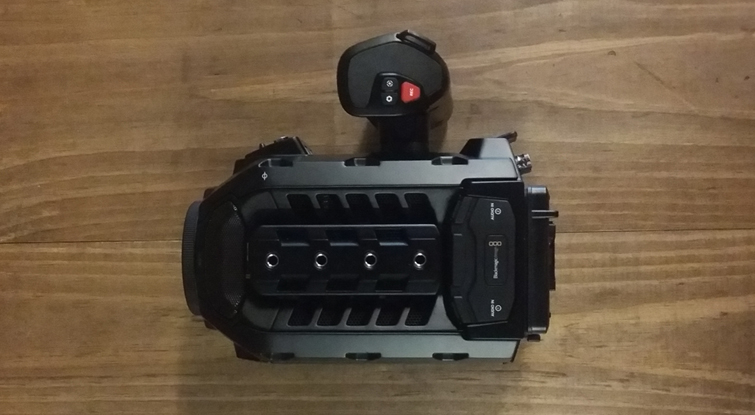 Utilizing a touchscreen menu system on the same screen used for composing and focusing the shot can be an annoyance without an additional monitor. Although you can change essential settings without pulling up the menu, accessing anything else completely kills the image. There’s also the element of dirt and residue from your hands building up and smudging the screen, especially on location. Tapping an LCD screen too hard can risk permanently damaging it as well.

Since we’ve completed our review of the camera, Blackmagic has already updated to Public Beta 2, addressing a few of these concerns — including the slow boot time. For more details on that update, check out the Blackmagic website. 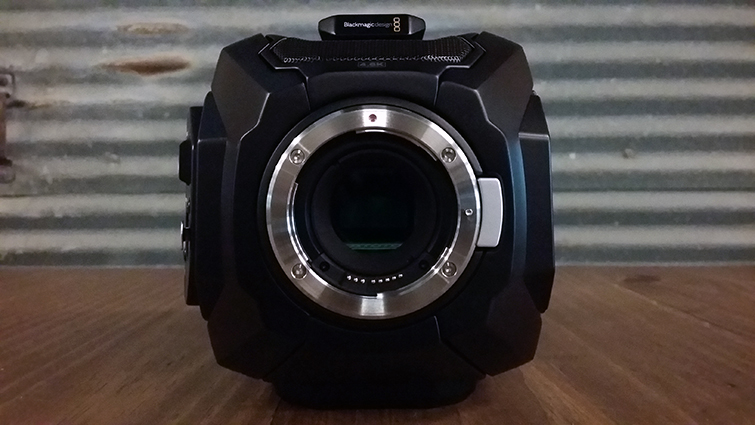 Physically, the camera feels robust and sturdy compared to other brands’ similarly priced models. The rectangular form factor, on par with bigger players like Sony and ARRI, enables comfortable cradling and handheld configurations with nothing jutting out to make things uncomfortable and awkward. This is a major improvement over the pretty goofy form factor of the Blackmagic Cinema Camera.

To get past a simple tripod setup, you will have to invest quite a bit of money for accessories like the Ursa Mini Viewfinder and Shoulder Rig Kit. Add that to the cost of purchasing larger batteries necessary to run the camera like Anton Bauers or IDX V-mounts, chargers, CFAST cards, a card reader, and you’ve nearly doubled the cost of your investment. 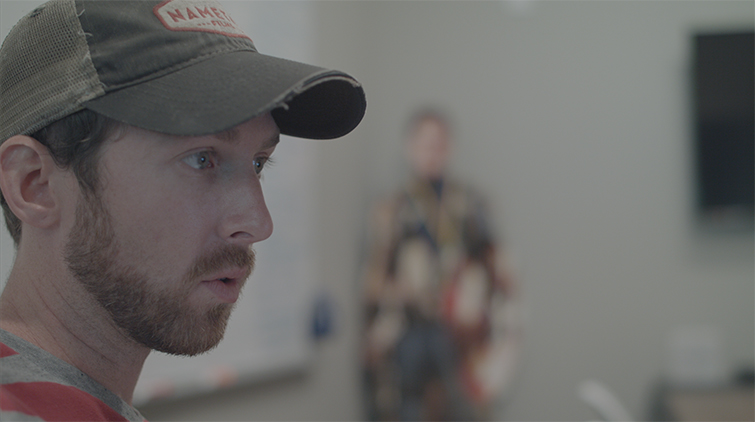 With that said, this camera should be considered an extremely viable option for independent shooters looking to step up their game. Although the new software stands out among its competitors, it is not enough of a selling point to really be a strong factor in the decision to purchase the camera.

For cinematographers who rent for larger projects, but want to own a camera for their own packages — the URSA Mini 4.6K is a solid choice. It’s affordable, takes EF lenses (depending on the model), and you can easily rent any additional gear and accessories for larger productions. There are also great third-party accessories from manufacturers like Wooden Camera.

The image quality, physical aspects of the body, and the ability to build it up to a professional cinema-style camera for independent movies and documentaries is a major plus. The URSA Mini 4.6K is certainly capable of having as simple or as large of a set up as you want — from one-man band to a full studio camera.

What are your impressions of the URSA Mini 4.6K camera and 4.0 firmware? Share your opinions in the comments below.

The URSA Mini 4.6K camera and 4.0 firmware was tested and reviewed by Ryan Patterson and Michael Maher.