Use different tools based on offsets in conjunction with the RGB Parade to quickly identify color casts and fix bad white balance!

Offsets are a great way to fix a bad white balance or color cast, but not every software implements offsets in the same way, and there are several different types of controls that all use RGB offsets to perform corrections. They all function in pretty much the same way, but some applications have only one of these controls and some have them all. Knowing what they are called and how the controls work will let you quickly find the ones your chosen software has, and enable you to do quick, on-they-fly white balance corrections when used with the RGB parade.

One of the best tools in a colorist’s arsenal on the first “correction” pass is the RGB Parade. You can find a more in-depth discussion of it in this article, but here’s a quick run-down: The RGB parade works very similar to the waveform monitor, but instead of showing total combined luminance for the image, it splits the luminance into the separate RGB channels that make up the image. 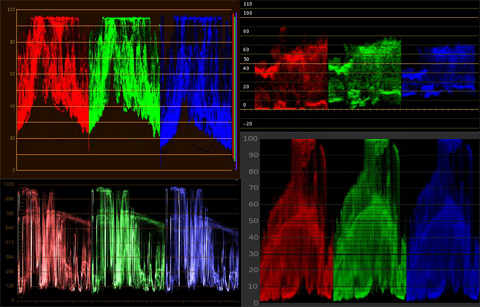 You can use this to your advantage in finding color casts. There are exceptions for when the production design or content of a scene is primarily one color (a close up on a red hat, a shot of the sky, or a room that is vividly yellow with orange furniture, etc.) but in general, most shots will have a fairly even balance between the three channels overall, with small variations in one tonal range or another.

If you look at a shot’s RGB Parade and see one color obviously out of line with the other two and it isn’t motivated by production design, you probably have bad white balance or a color cast on the shot that you’ll want to remove during the correction pass.

Here’s a shot where the camera was accidentally set on tungsten white balance while outside in sunlight. You can see both in the parade and the image that there’s way too much blue. 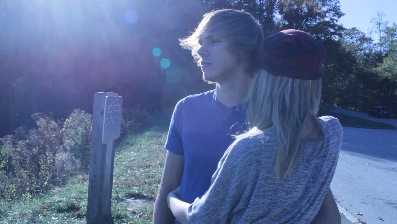 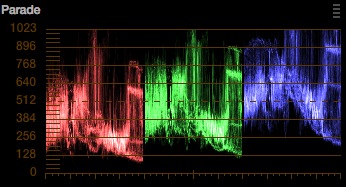 After removing the cast from the shot, you can see that the RGB channels roughly line up on the parade. 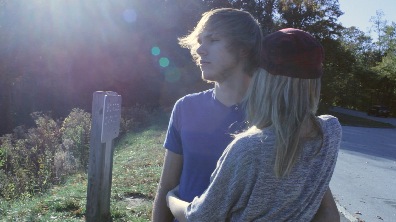 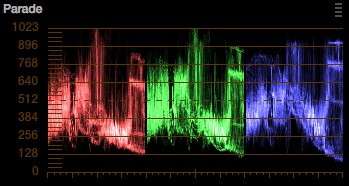 Printer points come from the early days of film color correction, where they would shine color filtered (RGB) lights with varying intensities through a negative print onto a positive print to make a color corrected version of the film. They aren’t the primary way that colorists in the DI age adjust color, but some color grading software includes these controls, and they can be a powerful way to remove color casts and fix bad white balance.

Another control that works very similar to printer points is the Channel or RGB mixer. In most software, the RGB mixer lets you adjust the amount of red, green, and blue in each channel (yes, RGB control for R, G, and B channels!) It’s a little crazy – and you should definitely play around and experiment with it’s other uses – but if you only adjust the Red in the R channel, the Blue in the B channel, etc., then it works just like printer points. Use it in conjunction with the parade, get the channels close together, and remove that color cast. 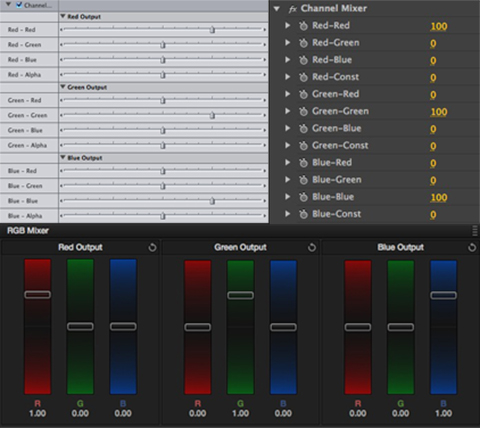 The other main control that can help you quickly fix white balance is the offset control. It usually takes two forms: sliders and a hue/color wheel. The sliders function almost exactly like the printer points or the RGB mixer; bring the amount of R, G, or B up or down depending on what you do with the sliders. The hue offset wheel is a little different than the rest of the controls covered above. You’ve probably seen it before, called a “color corrector” (FCP), a “fast color corrector” (Premiere Pro) or just an “offset” wheel (Resolve). The concept is the same for all of these. Push the hue like with a traditional three-way color corrector, but shift the entire image to that hue instead of just specific tonal ranges. 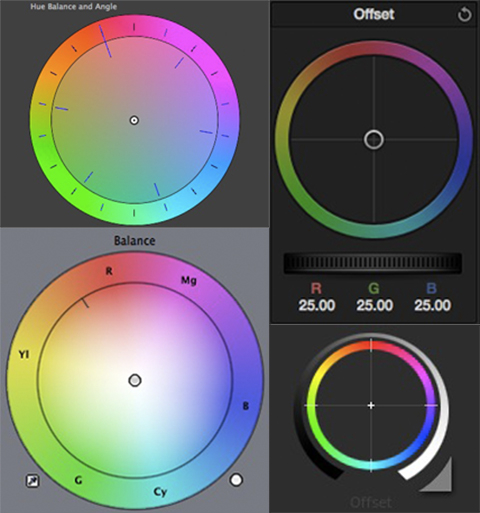 There are advantages and disadvantages to using this control with the RGB parade. If you can pick out what color cast your shot has, just push the wheel in the opposite direction, so it’s very intuitive. The problem comes when you can’t exactly put your finger on what color needs to be removed, and you start relying on the parade to make the adjustment. Because you don’t have separate RGB controls, the direction you push the wheel affects all three channels in different amount, so you may have to play with it to get the right combination of RGB on the parade.

As you can see, all of these controls function in pretty much the same way, but knowing what variations there are on these controls will let you know what options your chosen NLE or color grading software has for you to work with.