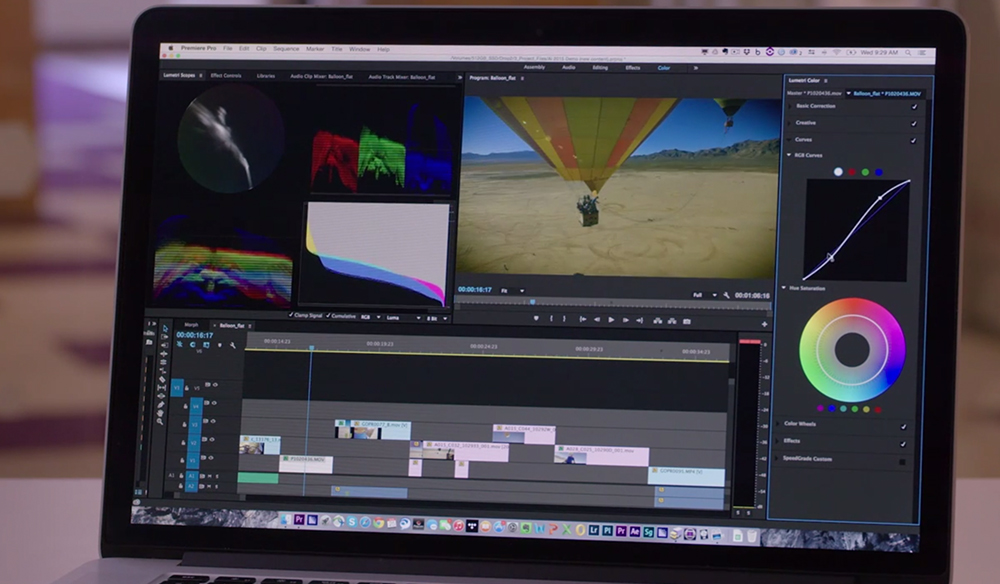 Today is a great day for Creative Cloud subscribers. Adobe has just announced updates to their popular video editing applications, including Premiere Pro, After Effects, and Media Encoder. There are a lot of important announcements, so let’s dive into each one and discuss some of the implications for video editors and motion graphic designers.

The new update is called Creative Cloud Next and it looks to be a big update with a lot of great new features. Let’s begin!

Perhaps the most impressive new feature to come from the update is the all-new morph cut effect. If you’re a documentarian or do a lot of corporate videos, then you know how annoying it can be when you have a subject that can’t seem to say all of their lines on one take.

Normally you would have to cut the video and add b-roll over the edit points to hide your cuts, but the all-new morph cut effect hopes to make your life a whole lot easier. Essentially the morph cut is an effect that blends clips together to create a seamless transition. While you probably can’t use this transition in just any circumstance, it does look to be fairly helpful. Here’s a quick video showing the morph cut effect in-action:

The Lumetri Color Panel is another huge announcement for Premiere Pro. If you have any experience with picture editing in Adobe Lightroom, then you’re in luck — because the new Lumetri Color Panel is essentially a Lightroom-like panel designed to help speed up the color grading process while still allowing you to have a lot of control over the look and feel of your image.

In the panel, users can adjust various parameters like white balance, contrast, highlights, shadows, curves, color wheels, and vignette. The effect also has a faded film parameter that you can adjust to give your footage a quick hipster look. Users can save their color grades for future reference, and because this new feature is an effect,  it can be easily applied to each clip individually and adjusted as needed. Here’s a quick video of the Lumetri Color Panel in action:

For those who enjoy using the curves effect, you’ll be happy to hear that the Lumetri Color Panel comes with an updated version of the curves effect you’ve come to love. However, more impressively the Lumetri Color Panel now has a new Hue and Saturation tool that has never been seen before. The interactive wheel allows you to make saturation adjustments based on particular colors instead of the image as a whole.

If you enjoy using the mobile Premiere Clip app for quick video editing, the good people at Adobe have added a little more functionality to help you with the process. Essentially you can now open Premiere Clip projects directly from the welcome screen.

It’s no secret that rendering and preview times is one of the worst parts about the motion graphic process. Short of having a computer that costs as much as a house, you’ll always have to wait longer than you want when previewing a composition.

However, in the latest update to After Effects, previewing has been overhauled to allow for flexible keyboard shortcut options, preview favors, preview range, and the “play from” point. Users can also make adjustments to their clips without playback being interrupted. So, if you see something strange during playback, you can change it and see your clips playing back at the same time.

The After Effects camera tracker effect is amazing, but in the latest update Adobe has unveiled an all-new mask tracker specifically designed to track human faces. Because the tracker uses masks, it can be feathered to add a softer feeling to the overall image. You can also apply effects specifically to the masked layer so that only the face will be affected by the adjustments.

The Creative Cloud Libraries feature is perhaps the most ambitious announcement from the entire Creative Cloud Next update. Essentially, the libraries panel stores assets, colors, and looks that can be quickly imported into your composition. Think Google Drive, but inside an After Effects panel.

The cool thing about the libraries panel is the fact that it can be updated and changed across multiple computers simultaneously. It’s a great feature if you’re looking to access elements that you frequently use across multiple projects like logos, colors, and color looks. Unfortunately the file types are limited right now, presumably so Adobe can slowly introduce products from the Creative Cloud Marketplace. Hopefully we’ll see more file formats supported in future updates.

The new updates will be free for any Creative Cloud subscriber, but there is currently no word on when they will be released. In Adobe’s press release, they stated that we’ll likely get a release date next week at NAB. When we do hear about a release date, we’ll update this article, so check back early next week! Want to learn more about Adobe’s latest updates? Check out a few of the following resources:

Which update are you most excited about? Let us hear about it in the comments below.